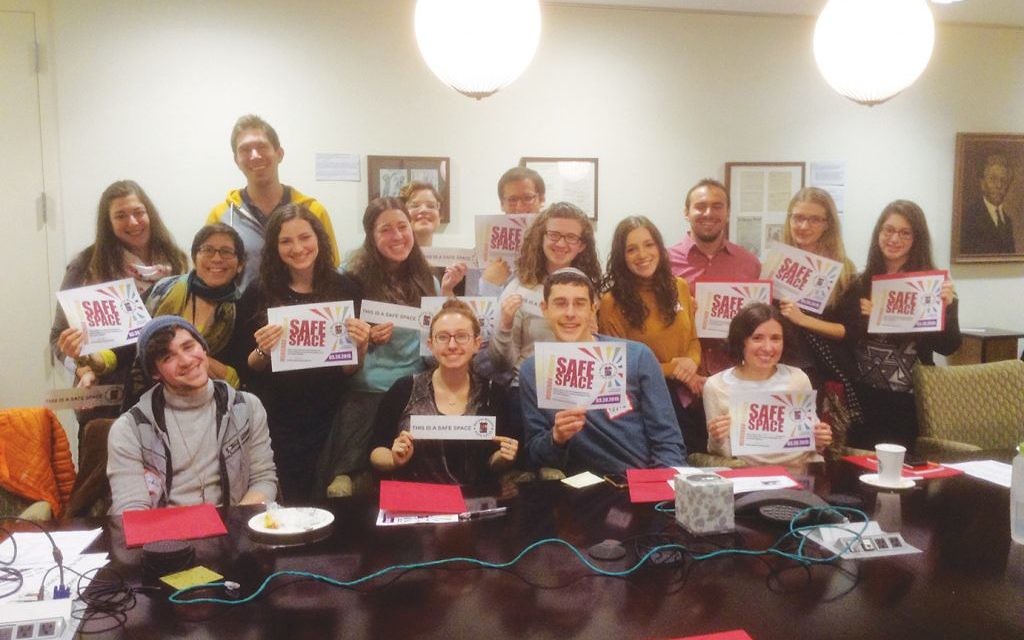 Rachael Fried, a 27-year-old graduate of Stern College, spent years formulating one three-word bombshell of a sentence: I am gay.

“Just being able to say it to myself, let alone others, took years,” said Fried, former student council president at Stern and current graduate student at Parsons The New School for Design. She wore a knee-length pencil skirt, button-down top, cardigan and colorful scarf, long hair falling down her back.

“I’m pretty religious, and I’m pretty gay,” Fried joked. “My story, though, is not an extraordinary one. I was a typical Stern student leader.”

Fried spoke out publicly for the first time on a recent Friday at the second session of Merchav Batuach, a recently launched “safe space” seminar for Orthodox college students. Founded in December by Stern senior Dasha Sominski, the project, which offers language sensitivity training and networking opportunities for gay students and their allies, is poised to expand. Campus chapters at Barnard, Columbia, NYU, Yale and Queens College are scheduled to open in the fall.

“I heard about the project though social media, and realized it would be a perfect fit for our campus,” said Sophia Adler, a sophomore at Queens College who hopes to launch the training sessions there this fall. The significant Orthodox population at Queens makes it an ideal location for the initiative, she said.

Unlike the reparative therapy model, Merchav Batuach hopes to promote a model of acceptance. The project, sponsored by Eshel, a nonprofit founded in 2013 to support gay Orthodox adults and their families, received $15,000 from the Jewish Women’s Foundation of New York last month; that grant followed on the heels of a $10,000 grant from UJA-Federation of New York in January, according to Eshel’s executive director, Miryam Kabakov.

The recent training session, which attracted about 30 students, included “coming out” role play, in which two students improvised the scene of a student telling his college dorm counselor that he’s attracted to men. After a round of applause, viewers critiqued the scene for instances of insensitivity and brainstormed ways to respond effectively in a real-life situations.

“I came today to find out how to respond when a friend tells me she’s gay,” said Leora Veit, 22, a graduate of Stern College. Veit said that in the past few months, she’d discovered that several of her friends weren’t straight — “they opened up to me because they felt comfortable, and I found myself feeling flustered,” she said. “Learning how to respond was a skill I needed to learn.”

Over the past several years, LGBTQ awareness within the Orthodox community has been increasing, though slowly, given the stance of Jewish law toward homosexuality. (In a much-publicized incident, a 2009 panel on homosexuality in the Orthodox community, hosted by Yeshiva University’s social work school, led to strong blowback from university officials.) JQY, an organization founded in 2001 to promote understanding for young gay Jews, today serves over 600 LGBTQ Orthodox young adults across New York. Keshet, a national grassroots organization, provides inclusion training for LGBTQ individuals and provides families with resources and guidance. For the third year, Eshel is hosting an annual weekend retreats for parents of LGBTQ youth — this month’s retreat will host about 50 parents from Orthodox and charedi backgrounds.

Isabel Singer, a junior at Yale University, invited Sominski to speak at the New Haven campus’ Hillel in the fall.

“Being gay and Orthodox is not rectifiable in certain ways,” said Singer, who considers herself queer, “but making social space for these Jews is always possible.” Though Singer used to be Orthodox, she now considers herself an egalitarian Jew. “For me, being queer was a large piece of why I moved away from Orthodoxy,” she said. “But that doesn’t mean Orthodoxy can’t embrace those who are queer.”

“The progress is astounding,” said Fried, who said she waited until after college to come out to her peers because she feared being stigmatized. “In my time at YU, an anonymous article in the student newspaper was a big deal. Now, students are coming to seminars like this.”

Though Fried originally wanted to remain anonymous, she changed her mind after speaking at the recent seminar, which was held at the Forward’s office in Lower Manhattan. “I so badly want others to have the role model I wish I had,” she said.

Despite support among the student body (several articles in the student newspapers have been written about the initiative), a YU spokesperson said there is “no formal relationship between the program and the university.” Merchav Batuach does not receive university funding, and seminars must take place off-campus.

“To say I’m particularly welcome or appreciated on campus would be taking it too far,” said Sominski, who openly identifies as queer. Though certain staff members have expressed support for the endeavor, administrators maintain a strict distance, she said.

Still, support from peers is more important, according to Sominksi. “Last time, I personally recruited most of the people who came,” she said, referring to the first Marchav Batuach seminar, in December. “This time around, I didn’t know most of the people there. Students are coming on their own.”

“Merchav Batuach seems like a place that is educating people on how to be a supportive friend,” said Channa Silverman, 22. A junior at Stern, Silverman is Chabad and married — at the seminar, she covered her hair with a colorful scarf. “I consider myself someone who friends can talk to about all sorts of things,” she said. “This is one subject where I needed an education.”

The three-hour seminar is tailored to Orthodox students who have had little or no exposure to these issues, explained Eshel’s Kabakov, herself a gay Orthodox Jew and a Stern graduate. In one interactive exercise, students were asked to match relevant terms with their definitions — the list included “androgynous,” “biphobia,” “homophobia” and “gender binary.” One student asked Sominski for the definition of an “ally,” the term used to describe supporters of gay rights.

“We start with the basics,” said Kabakov, who said most in attendance never formally discussed these topics before. “There are no dumb questions, and no assumptions of knowledge.”

Another exercise challenged students to describe a date, without using heteronormative pronouns. Students stumbled over their words, laughing, and kept trying.

“The first place to make space for LGBTQ youth is in our words,” said Kabakov, who said the activity highlighted the prevalence of heterosexual presumptions in casual conversation.

Though most of the students were from Yeshiva University, representatives from other universities attended. Talia Lakritz, a junior at Barnard, hopes to facilitate the seminar among Columbia students.

“Language sensitivity is part of being Jewish,” said Lakritz, referring to the stringent Jewish laws against evil gossip, or lashon hara. “That translates to LBGTQ issues also.”

Though many Orthodox gay young adults are feeling more comfortable coming out to peers, coming out to their parents remains difficult.

One gay YU student, who wished to remain anonymous for privacy reasons, said his parents are still “grappling with the ramifications” of his identity.

“From as far back as I can remember, I’ve lived with two truths,” he said. “I’m Jewish, and I’m gay. Both are absolute.” Though he said his parents respect his authenticity, there’s a point after which they won’t support his choices.

“It’s OK, I’m strong. But I want to help others who aren’t as far along,” he said. Despite his resilience, he often wonders about his future in the Orthodox community.

“It’s hard to feel alone. But when I come here, I realize I’m not alone,” he said, blinking hard. “This redefines not being alone.”