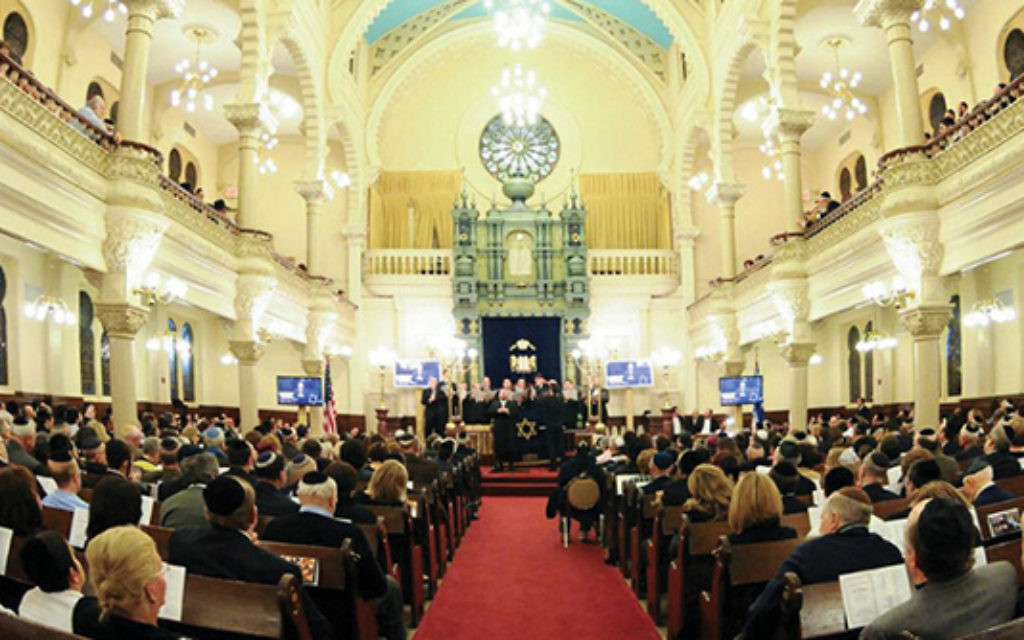 For a religion, any religion, the intangibles of the spirit would seem to be paramount, even portable. And yet 2,000 years after the destruction of the Temple, Jews mourn it still. More than 30 years after almost every Jew moved away, Jews on their way to Yankee Stadium drive down the Grand Concourse and observe an internal Yizkor at the sight of Jewish Stars in stained glass or stone, fronting buildings that are now churches, or chain pharmacies. Kristallnacht, “the night of broken glass,” the Nazis’ nationwide pogrom in 1938, induced shivers as much for what it targeted as for what it foretold.

Like baseball stadiums (called “green cathedrals” by the poets), shuls (and cathedrals) are loved to an extent perhaps unimaginable to the uninitiated. Many a congregant could understand the afternoon when Detroit fans, fearing the loss of their old ballpark, surrounded the stadium for a group hug.

This year is the 30th anniversary of the Sacred Sites program, a private statewide initiative providing New York synagogues and churches with financial and technical assistance necessary to preserve historic religious locations. (For church-state reasons, public funds can only be used for exteriors). In 2012, Tifereth Israel in Corona, Queens, thought to be the oldest shul in the borough, and no longer a wealthy congregation, kept its century-old shul alive by raising $1.6 million in state, city and private grants for a needed renovation, helped by Sacred Sites.

In its 30 years, Sacred Sites, a division of the New York State Landmarks Conservancy, says it has awarded $93 million to 1,350 restoration projects at 750 congregations. Aside from helping with grants, Sacred Sites helps match congregations with contractors, architects, even stained glass studios. Additionally, the group provides congregations with workshops and training programs pertaining to the repair of roofs and facades, maintenance and restoration projects, energy conservation and even financial management.

On May 21 and 22, more than 120 shuls and churches will welcome visitors for their annual Sacred Sites Open House, showcasing the architecture and programming of religious New York to visitors beyond their immediate congregations. “Whether you are religious or not,” said Peg Breen, president of conservancy, to enter into these congregations will enhance the sense of “why it is important to preserve these neighborhood anchors.”

The question of preservation and landmarking has intensified in recent years with synagogue mergers throughout the metropolitan area, and the loss of historic structures, such as the Lower East Side’s 150-year-old First Romanian-American Congregation. The building, with its stained glass and arched Romanesque entry, whose high ceilings and excellent acoustics earned it praise as “the Cantor’s Carnegie Hall,” was reduced to rubble after its roof collapsed ten years ago. The remaining congregants were few and elderly, and were uncomfortable with accepting financial grants. The congregation no longer exists, except as a warning to other congregations.

Columbia’s Dolkart told The Jewish Week, “There was an effort from the community, and from some within the small congregation, to have the building listed on the registry of historic places so they would be eligible” for various grants. “It almost happened but then the rabbi wouldn’t sign the form. If it’s a private synagogue, and not a landmark, the owners can do as they wish. I don’t think anyone thought it would collapse.”

Even when a building is left by choice, the pain is real. In 2007, when the Wantagh Jewish Center and the Farmingdale Jewish Center, on Long Island, merged into one shul within the Wantagh building, Robert Cooper, then-president of the congregation, told The New York Times, “It’s difficult to describe how attached people are to the physical structure of a temple, how deeply connected to it they feel.”

Lincoln Square Synagogue’s recently retired cantor, Sherwood Goffin, recalled being told by Rabbi Saul Chill of Far Rockaway, “‘Do you know why it is important to daven in a shul, and not in a basement or an apartment? It is because, soaked into the very walls of the shul are the prayers and tears of all the generations who davened there before you… All those prayers and tears join with yours in one great prayer that reaches right up into the very halls of Heaven itself.’”

Dolkart told us, “A lot of religious institutions are in older buildings that are aging. Some have roofs that are leaking, or stained glass (in a lead frame) that is buckling. At times, there’s vandalism.” Maintenance bills can mount for buildings at a time when “small or shrinking congregations can’t afford to maintain them. Even more affluent congregations might have trouble.”

Preservationists have been seeking to preserve old congregations for civic reasons. Said Dolkart, “The synagogues of the wealthy are not the only ones that deserve recognition, but also those vernacular synagogues,” shuls, usually older or poorer, that are not notable for their architecture but “served their communities and are important to their neighborhoods.”

Some of his students at Columbia “have studied vernacular synagogues,” such as the Old Broadway Shul in Harlem, to better understand synagogue design and how styles were chosen in different eras.

He noted that even shuls that have been sold to churches in the inner city have maintained their long-ago spirit. Some churches, said Dolkart, “particularly Baptist and Seventh Day Adventist, will often keep the ornamental detail” of the synagogues that once were. “You can walk into places that have been African-American churches for decades and see they’ve kept almost all the original detail,” such as the Temple Israel, an old German synagogue, now a church, on Lenox Avenue in Harlem, with the columns in front and the balcony within.

The old Ward Avenue shul in the Soundview section of the Bronx, is now maintained by the Green Pastures Baptist Church. In the church one can still see the old engraved stone plaques honoring “The Walton Avenue Boys” and others honoring those in the once-Jewish neighborhood who build the original shul.

Sometimes wealth can threaten a synagogue. Rabbi Arthur Schneier said that in 1975 a major developer wanted to buy his Park East Synagogue to build a 44-story building, even giving the shul 10 floors for its needs. “You won’t have to worry about money,” the rabbi recalled the developer saying. The rabbi refused to sell: “The first thing I did was urge my board to petition the landmark commission to have the synagogue designated as a landmark,” and it was so declared in 1980.

“There’s something very personal about my commitment” to Sacred Sites, said Rabbi Schneier. “I saw my synagogue burn on Kristallnacht” in 1938 Vienna.

After the Temple was destroyed, said Rabbi Schneier, it was the synagogue that kept us going. It was a beit tefillah (prayer hall), a place for Torah study, and a beit knesset, a place where Jews can not only connect to Hashem but connect to each other.”

And if that’s not worth preserving, a lot more than the building would be lost.