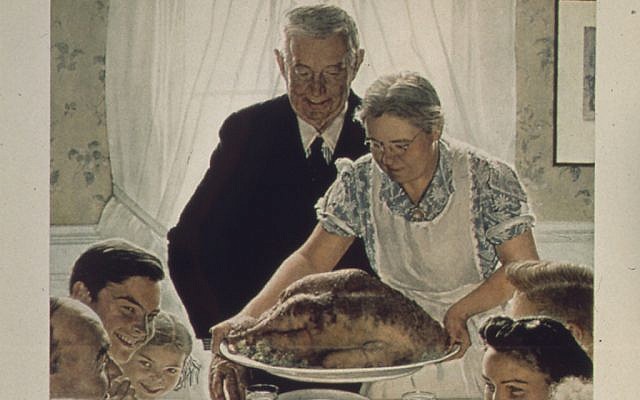 If you’re a typical resident of the United States, you find the most meaning in your life through your relationship with your family — much more than through your career or the money you earn.

That is one of the chief findings of a new national survey conducted by the Pew Research Center.

According to the study, released this week in advance of the Thanksgiving holiday, 69 percent of Americans cited family as the source of “what provides them with a sense of meaning.” The figure for career was 34 percent; for money, 23 percent; for spirituality and faith, 20 percent, with other things (friends, hobbies, learning) trailing. “Family is among the most popular topics across demographic groups,” the study’s authors stated.

The study’s small sample size — two groups of some 4,000 men and women polled in late 2017 — did not allow for a breakdown of Jews, who represent about 2 percent of the U.S. population. Separate figures were provided for larger faith communities such as Mainline Protestant, Evangelical Protestant, Historically black Protestant and Catholic.

But an educated guess about the American Jewish community is possible.

“Jews would fit in very well” in the importance that most people place on family, said Jack Wertheimer, a student of American Jewry. “I would not be surprised if Jews came out at the same level if not higher.”

Wertheimer, professor of American Jewish history at the Jewish Theological Seminary, who focuses on trends in American Jewish life, said statistical and anecdotal evidence points to the primacy that a rabbi friend called “the sacred ground” of the family in Jewish life.

Wertheimer said the study revealed a schism between liberals and conservatives, as well as religious respondents and those who did not rank religion of major significance. That divide, which has appeared to widen in the last two years, would be likely be there among Jews too, Wertheimer said.

“For many liberal Jews, politics has replaced many things that are important, including religion,” he said.

The survey’s religion-centered questions, which emphasized faith, did not include activities that many Jews would view as very meaningful, such as text study and observance of Jewish holidays and other rituals, and chesed activities in the Orthodox community, Wertheimer said. “That was striking to me. The kinds of categories that we tend to think about are for the most part absent from this study.”

Participants in the study were asked both open-ended questions (“What about your life do you currently find meaningful, fulfilling or satisfying?”), and selected items from a list of 15 (including faith and spirituality, community and belonging, and pets) that provide “the most meaning and fulfillment.”

According to the survey, people with high income levels “are more likely to mention friends and being in good health” as a source of meaning. “Evangelical Protestants are more likely than Christians in general to say that they find a great deal of meaning in religion.”

* “Those who identify as politically liberal mention creative activities more than Americans overall. Conservatives are more likely to bring up faith, even after controlling for differences in their religious identification … liberals find more meaning in creativity and causes.” This, said Wertheimer, would reflect the emphasis on tikkun olam (repairing the world) work among many progressive Jews.

* “Younger Americans [are] less likely to mention religion.” According to Wertheimer, “That certainly is consistent with what we know about younger American Jews.”

Wertheimer said there would be value — for guiding Jewish institutions — in shaping a survey that more closely reflects Jewish priorities. “It doesn’t bother me if we have different parameters. We’d have to have different questions about what Jews find meaningful.”