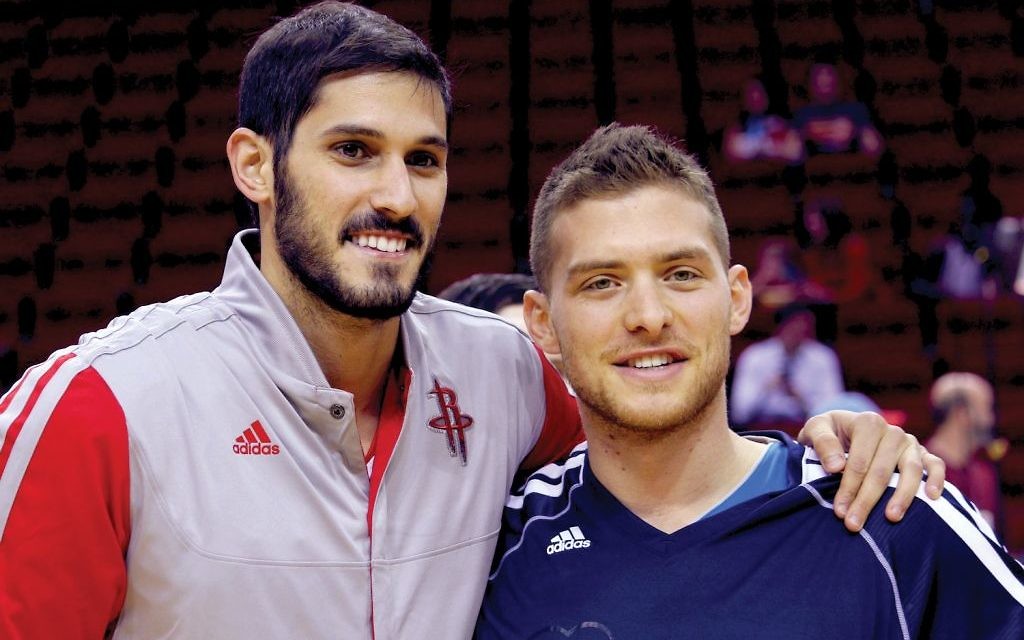 Midway through the first quarter of a recent preseason game between the Houston Rockets and the Dallas Mavericks, Rockets’ forward Omri Casspi joined his teammates on the Rocket’s homecourt.

A minute later, the buzzer sounded. Mavericks’ rookie guard Gal Mekel came into the game too.

And Jewish athletic history was made — for the first time, two Israelis were playing against each other for the first time as members of National Basketball Association teams. Casspi, a veteran, earlier played for Sacramento and Cleveland; Mekel was drafted this summer.

“It’s a big thing, I think, for such a small country to have two [NBA] players. It’s something unique,” Mekel said at the Mavericks’ downtown hotel here as Casspi, the first Sabra in the NBA, sat across from him. “I saw the excitement when Omri came into the league, and I’m really looking forward to experiencing that, so hopefully we’ll bring pride.”

The Israelis will face each other again Friday night, when the Mavericks return to Houston’s Toyota Center in the first of four regular-season meetings between the Southwest Division rivals.

When Casspi’s teams played road games since he entered the league four years ago, chanting, adoring, Israeli flag-waving fans often followed. The novelty of two Israelis on the same court is sure to rekindle the fervor.

At 6-9, Casspi towers six inches above Mekel; they won’t be matched against each other unless there is a defensive switch.

Their coaches and teammates note similar characteristics in both players — primarily their competitiveness, commitment to improve, determination on defense and team-first mentality. Casspi’s output declined steadily in his brief NBA career; like first-year Mekel, he is a reserve at the start of this season; both have much to prove playing for talented Western Conference teams.

Casspi says he found a kindred spirit in Lin. On the team bus, on the road and at Sabbath dinner at Casspi’s apartment, the two have talked about their ethnic pressures and struggles in establishing themselves in the NBA.

Lin says he and Casspi have gone through “some of the same things.”

Maverick center Samuel Dalembert, a Haitian, who played with Casspi on the Kings, is the only player to count both Israelis as teammates. “I’m making history,” he said.

Casspi and Mekel are friends from their days playing professional basketball in Israel. Casspi referred Mekel to his Florida-based trainer after Mekel signed with Dallas. And last summer in Israel, Mekel watched Casspi and the rest of the national team practice for the EuroBasket tournament.

Throughout the season, “we’ll watch each other, look up to each other,” Casspi said.

“For me, it’s great to have somebody to … get tips from,” Mekel said. “All the things rookies go through, I have a guy I can ask, and have a friend to speak the language with.”

“If we do well and represent the country well,” Mekel said, “we could open the door for other guys, like Omri opened the door for me.”