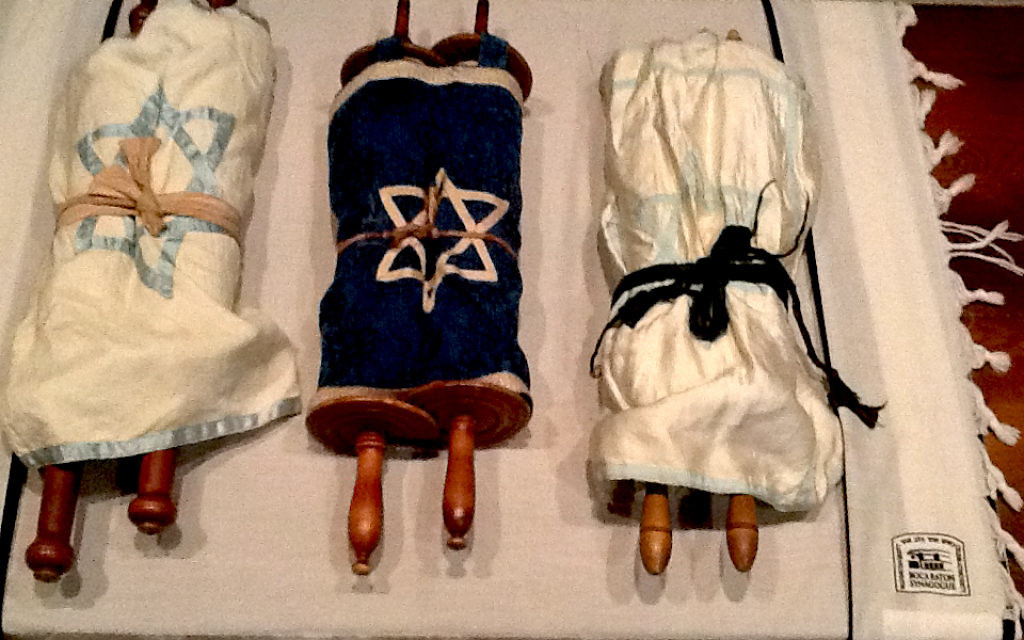 Three Torahs kept stored until earlier this year in a Russian library after having been seized from the Nazis by Russian troops in 1944 will be exhibited Sunday at Congregation Ohab Zedek in Manhattan as part of its annual Kristallnacht observance.

Harry Ettlinger, the last survivor of the Monuments Men — soldiers assigned to locate and save cultural objects looted by the Nazis and hidden in caves and other sites — is scheduled to be on hand for the program.

Kristallnacht is the event in Nov. 9-10, 1938, when Nazi-ordered attacks destroyed thousands of Jewish homes, businesses, schools and synagogues in Germany, Austria and Czechoslovakia and led to the arrest of 30,000 Jewish men. It was the Nazis’ first violent attack against Jews.

The Torahs were part of a trainload 118 Torahs, Judaica and art work believed stolen by the Nazis from the Jews of Budapest, Hungary. With the help of local rabbis in Russia, the Jewish Heritage Foundation Inc. of Florida prevailed upon the Russian government in May to permit the release of 13 of those Torahs. Eight were given to a synagogue in the Russian city of Nizhny Novgorod, whose local library had stored them for more than 70 years. Another two were brought to a synagogue in Moscow and three were flown to the U.S.

Sibyl Silver, the foundation’s president, said efforts are now underway to secure the release of another 10 Torahs in January and that she hopes all will be released within the next five years. She said she is bringing the three Torahs in the U.S. to New York in effort to publicize the foundation’s efforts.

The Torahs are smaller than those traditionally used in synagogues — about two feet long — and probably belonged to individual Jews, according to Silver.

She said it is believed that about 75 percent of the 118 Torahs can be made kosher and that she would like them to be used by synagogues that don’t have a Torah, as well as the Israel Defense Forces and Jewish youth groups worldwide. Those that could not be made kosher would be put on display in museums.

Rabbi Allen Schwartz of Congregation Ohab Zedek said in a statement, “We must never forget the horrors of the Holocaust, and at the event we will announce how we will be part of the project to use these Torahs to help promote Jewish and Holocaust education worldwide.”

Silver said the Torahs have already been exhibited in Florida and Los Angeles and that the New York stop is part of a national tour she is planning for the Torahs.

“We are going to be making strategic stops throughout the United States,” she said. “I want to make people aware of the Torahs. It is one thing to see a picture of them and another to see them live.”

She said she carries the Torahs “in a duffel bag that I take with me on the plane. We go first class. They are wrapped in tallism [prayer shawls] and protected by a pillow.”