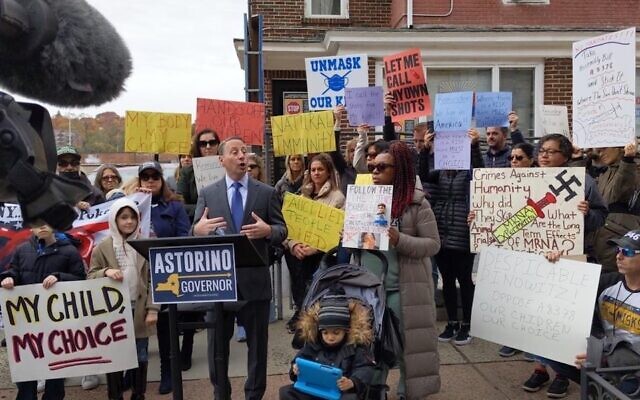 A protester, right, holds up a sign with a swastika during an anti-vaccine protest outside the Bronx office of Assemblyman Jeffrey Dinowitz, Nov. 14, 2021. Former Westchester County Executive and gubernatorial candidate Rob Astorino, at podium, spoke at the rally. (Courtesy Jeffrey Dinowitz, via Twitter)

Good morning, New York. Today is 11 Kislev, meaning there are only 14 shopping days left until Hanukkah.

ANTI-VAX PROTEST: A Jewish lawmaker in the Bronx blasted anti-vaccine protesters who flashed Nazi symbols outside his office on Sunday. (New York Post)

SOLD: Christie’s in New York sold a Vincent Van Gogh watercolor that was stolen by the Nazis from its Jewish owner for a record $35.8 million Thursday. (JTA)

HUMAN TOUCH: Humans of New York, the online photo project, profiled rabbinical student Jericho Vincent’s journey from living in a haredi Orthodox community, to leaving it, to reconnecting with Judaism at Romemu, the Renewal congregation on the Upper West Side. (Jewish Week via JTA)

A TALE OF TWO MARTYS: Former Brooklyn borough president Marty Markowitz doesn’t know much about “The Shrink Next Door,” the new series on Apple+ TV, but he does know he shares a name with one of its main characters. (Jewish Week via JTA)

Knock Knock Give a Sock, a nonprofit founded by Adina Lichtman, has won the NextGen Innovation Award from the Neighborhood Coalition for Shelter, a nonprofit providing housing and supportive services for New Yorkers. Lichtman, honored as one The Jewish Week’s 36 Under 36 in 2018, started Knock Knock as a sophomore at NYU. The program collects and distributes socks to the homeless and creates gatherings among donors and recipients.

Scholar Leah Garrett draws on extensive original research, including interviews with the last surviving members, to tell the story of X Troop, a commando unit made up of Jewish refugees who had escaped to Britain and fought the Nazis. Register here for this Commonpoint Queens event. $8 members/$10 non-members. Noon.

If the rabbis of the Talmud couldn’t make a living learning Torah, how did they balance Torah with more mundane concerns? Dr. Rachel Rosenthal, adjunct assistant professor of Talmud and Rabbinics at the Jewish Theological Seminary, will study some of their stories and look at some models for lives that are enriched both by Torah and by work. Register here for this event, part of the JTS fall learning series, “Six Days Shall You Labor: Perspectives on Work in Jewish Text and Tradition.” 2:00 p.m.