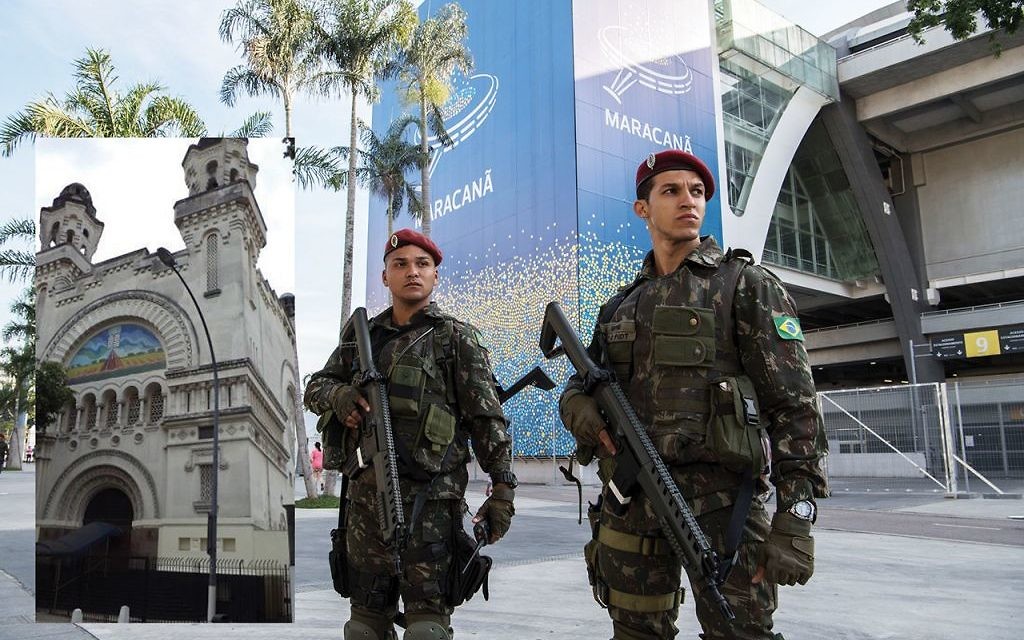 In Rio de Janeiro, the Jewish community’s calendar over the next two weeks is conspicuously empty: no major communal dinners or social events are scheduled.

Police presence this week outside of synagogues and other Jewish organizations in the Brazilian city is being stepped up, say communal leaders. And the bags and packages of visitors seeking to gain entry to Jewish buildings are now subject to closer-than-usual inspection.

On the eve of the Summer Olympics, which begin with the opening ceremonies on Friday evening, Rio’s Jews, according to community representatives, are alert to the increased security threat that every Olympics presents as they brace for an estimated 40,000 Jewish visitors to the iconic beach city.

In recent weeks self-proclaimed Islamic jihadists, affiliated both with ISIS and al-Qaeda, have issued calls for “lone wolf” supporters to commit acts of violence at the Rio Games, with members of the Israeli, American, British and French Olympic delegations as special targets.

While “no specific threats” have been made against the Jewish community in the weeks before the Olympics, the local Jewish community in any Games’ host city is “always a threat — if not the first choice, the second choice” of terrorists, said Paulo Maltz, president of Rio’s Jewish federation. “We are definitely a target,” he told The Jewish Week in a phone interview Monday.

Maltz said Rio’s Jewish organizations were advised to cancel or postpone major events, and synagogues were asked to consolidate their worship services with others nearby to minimize possible Jewish targets.

At past Olympics, Israeli athletes were warned against wearing uniforms that identified their country of origin, and Jewish visitors were advised to avoid acts that would identify them in public as being Jewish, such as speaking Hebrew or wearing kipot or Stars of David or other articles that would reveal their religious identity. These type of suggestions were not issued as of this week, Maltz said.

The Jewish community is in “a state of caution,” he said. “We are cautious, not nervous.”

Lottenberg said the Jewish community helped lobby two years ago for approval of an anti-terrorist bill under consideration by the country’s National Congress. The legislation, approved earlier this year, provides for funding for heightened security “precautions,” he said.

As at all Games since 1972, when 11 Israeli Olympians were killed by Black September terrorists at Munich, the Jewish community has maintained close contact with police, the army and other security organizations. And, as in the past, Jewish spokesmen were reluctant to discuss specific security plans for Jewish sites, and for Jewish sites as well as those for Olympic and Paralympic competition sites.

“We made all of the needed arrangements,” Maltz said. “We are doing everything we can to make the community secure.”

Because of this concern, Rio’s Olympic Organizing Committee spent a record amount on its security budget — $2 billion. The security force will be 85,000 (many of the personnel trained by Israeli security experts), double the number at the 2012 Summer Olympics in London.

An Israeli-developed high-resolution imaging satellite will aid in border surveillance.

In a related threat against Jewish interests, supporters of the international BDS (Boycott, Divestment and Sanctions) movement mounted an unsuccessful effort over the last two years to keep Israel out of the 2016 Olympics. Patterned after the international campaign that in 1964 banned athletes from then-apartheid South Africa from competing in the Olympics, this “Olympics without Apartheid” campaign, aimed at the International Olympic Committee and at the organizations that regulate individual sports, is supported by the Palestinian Authority.

The effort has failed so far, as has one to expel Israel from FIFA, the world soccer organization.

One target of the latest anti-Israel campaign was Israel’s International Security and Defense Systems (ISDS) firm, a veteran of counter-terrorism training, which announced in 2014 that it had been awarded a $2.2 billion contract to coordinate security at the Rio Games. Organizers of the Summer Olympics reportedly cancelled the contract.

While BDS supporters, including the electronicintifada.com website, claimed that their efforts led Brazil to back away from using ISDS to handle security matters at the Games, the Israeli consulate in Sao Paolo said “no BDS-affiliated organization had any effect” on ISDS’ work in Brazil.

Part of the anti-Israel campaign was an attempt, eventually discouraged by the IOC, to hold Olympic qualifying events in Arab or Muslim countries that do not grant entry visas to Israelis, said Michael Ross, a California-based independent activist and lobbyist who has mounted a personal campaign on behalf of the Israeli Olympians.

While Israelis will compete at Rio, the effort by BDS proponents to keep Israel out of future Games is certain to continue, Ross said. “They tried. They lost. They will try again.”

As in recent Olympics, the host city’s Jewish community has mounted a major effort to welcome visiting Jewish athletes and tourists, offering a combination of religious, cultural and tourist-friendly programs.

To prepare for the onslaught of visitors, the Chabad-Lubavitch chasidic movement dispatched multi-lingual rabbinical students, including four from New York, to assist the Rio-based network of shluchim.

Chabad’s plans also include temporary Jewish welcome centers, kosher concession stands and a temporary synagogue and Jewish community center near the Olympic Village. Chabad will provide kosher meals to Jewish athletes and other members of Olympic teams and arrange housing for Sabbath-observant visitors, and sponsor special Shabbat programs at some of its locations.

“We have been working overtime to make sure that every Jew who comes here will have their religious needs fulfilled,” Rabbi Yehoshua Binyamin Goldman, regional director of Chabad of Rio de Janeiro, told chabad.org.

In the Olympic Village, three Jewish chaplains will serve and a Jewish room stocked with kosher food and religious supplies like prayerbooks and tefillin will be available; separate kosher and halal buffet choices will be offered among 60,000 meals prepared daily.

Rio has a thriving infrastructure of Jewish organizations, including some 30 synagogues affiliated with the major denominations of Judaism, four mikvahs, a kosher soup kitchen, several Zionist groups, Jewish-sponsored hospitals, a Beit Menachem day school with an enrollment of 150 students, and active Jewish life on campus.

The Best Western Eretz Copacabana Hotel will offer kosher accommodations, with an attached Chabad synagogue, and the Conservative Temple CJB has arranged a slate of programs for the visitors.

Fernando Lottenberg said he will sample some of the Jewish hospitality, and watch some Olympic competition in Rio during the next two weeks, the security threat notwithstanding. “Life goes on.”

Though Jews will play a statistically small role as competitors (an estimated 250 athletes out of a total of more than 12,000 men and women), the 2016 Summer Olympics will have a strong Jewish flavor.

n The number of Jewish tourists expected during the Games: 40,000, a quarter of them Israeli.

n Brazil’s Jewish history: The Brazilian Jewish community, which was originally composed of people fleeing the Inquisition in Portugal in the 16th-18th centuries, grew with the arrival of European Jews in the mid-19th century, and later with more European refugees after World War I and World War II. Among the refugees from Nazi Europe was writer Stefan Zweig. The community, originally Sephardic, is now primarily Ashkenazic.

n The Israeli delegation: Israel this year will make its 16th appearance at the Olympics by bringing to Rio its largest delegation ever, with a record 50 athletes for the Olympics and another 50 for the 2016 Paralympic Games. The country’s 2015-16 Olympic budget was 30.5 million shekels (nearly $8 million).

n Athletes to watch: Some of the leading medal prospects are Americans Aly Raisman (gymnastics) and Zack Test (rugby); Israel’s rhythmic gymnastics squad, which won several medals, including gold in the clubs and hoops category, at the recent European championships; and Australian Jessica Fox (canoeing).