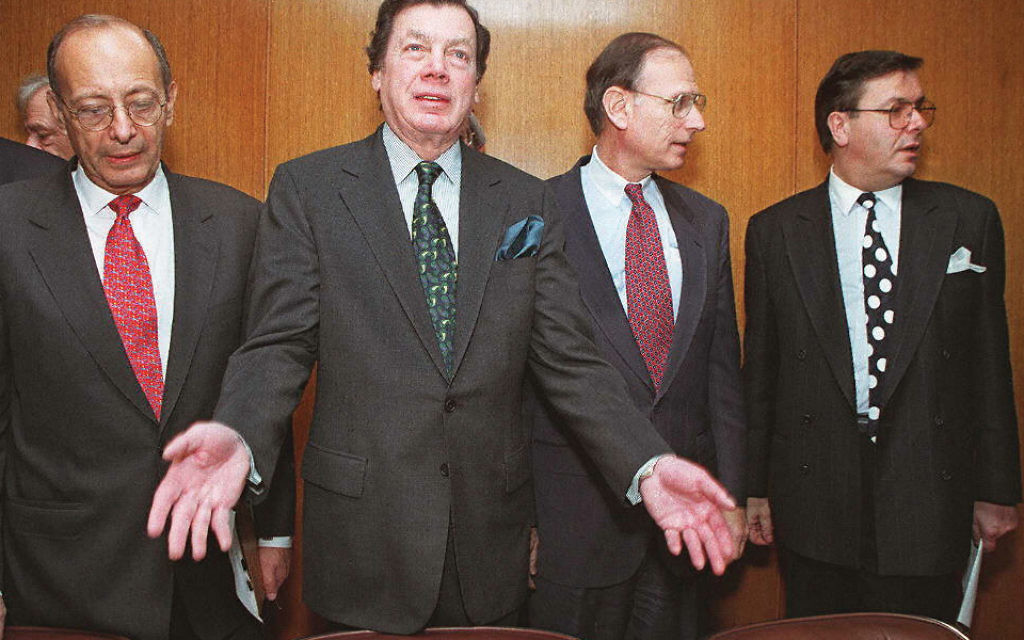 Edgar Bronfman was my dear patrician friend. We partnered together for 10 years, when I was president and he was chair of Hillel. He was a proud Jew who loved his Hebrew name, Yechiel Moshe. If heroes are not perfect demigods, but good people striving to make things better, then Edgar Bronfman was a hero.

We first met when Hillel was in need of a major philanthropic leader to capture the attention of our community. Edgar indicated that he had heard about our developing vision and wanted to consider getting involved. On meeting, I told him that I knew he had met all the leaders of the world, but I wanted to introduce him to the future leaders of our people. He liked that. His staff did some due diligence, and then Edgar said he’d be prepared to be supportive but wanted me to remember three words. (For a fleeting moment I was reminded of the “plastics” line from “The Graduate.”)

“Hope, not fear,” said Edgar, and that became our mantra. He told me that when he first assumed the presidency of the World Jewish Congress, he met with Rabbi Joseph B. Soloveitchik, the giant of Torah in the 20th century, who offered the following advice: “Mr. Bronfman, remember that the Jewish people were created for more than fighting anti-Semitism.”

Edgar mastered the role of lay leadership. He knew how to give, how to advise, how to listen and how to empower professional leadership. He took seriously his responsibilities of involving others in philanthropy. Although strong-minded, he was also open-minded. And he was fearless.

Travels with Edgar were part royal procession and part intimate friendship. And those trips gave us time to bond. Often alone with him on his jet (which I dubbed Hillel One), we spent hours reflecting on leadership, reminiscing on heads of state he knew, discussing Jewish life and Torah, and articulating his dreams for a Jewish Renaissance. He had become increasingly invested in Jewish knowledge and Jewish learning. We visited 80 campuses together, from Miami to Montevideo to Moscow, always with conversations and study with students, always with questions and answers concerning Jewish public policy. Edgar loved interacting with students, and insisted that each visit included a session of provocative Jewish text study, and vibrant conversation. It was clear he believed in the Jewish future and so did those who interacted with him.

Edgar M. Bronfman was not an uncomplicated man, sometimes a man of contradictions. He could show great compassion and great abruptness. But caring usually won. There was the time we were schmoozing on the plane. Edgar asked about my family. The conversation got around to one of my sons’ passions for football. Magically two plane tickets, hotel reservations, and passes for the Super Bowl appeared at my home.

As the years progressed, he was more and more pleased with his growing closeness with his children and grandchildren, and his deep affection for his wife Jan. And his pride in his Jewishness was breathtaking. I was present once, during the heat of the Swiss bank Holocaust funds imbroglio, when Edgar was interviewed by a national press correspondent. At one point, the reporter asked, “Mr. Bronfman, you are so passionate about this issue. Did you lose family in the Holocaust?” Without missing a beat, Edgar replied, “Six million Jews perished in the Holocaust. They were all my family.” He increasingly used his bully pulpit to advocate for Jewish literacy and passion. While an iconoclast in his observance, he had respect for the various traditions within the Jewish world.

He told me once that he lived by what he called the mirror test. He’d look in the mirror and needed to like who was staring back at him. There was much to like. He mattered to me, he mattered to us. He mattered. May his memory be for a blessing.

Richard Joel, president of Yeshiva University, was president and international director of Hillel: The Foundation for Jewish Campus Life from 1989 to 2003.