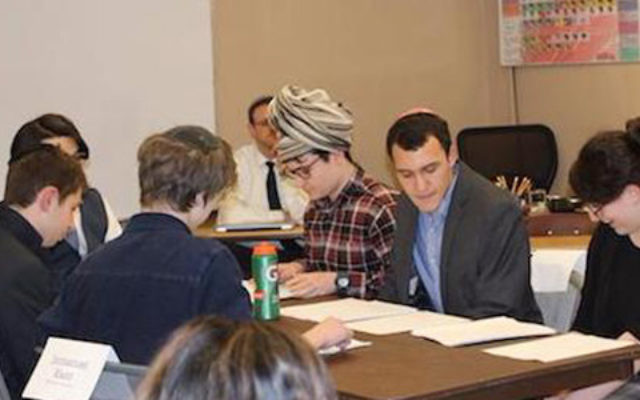 Meeting of Minds in Action.

C.S. Lewis, Immanuel Kant, Maimonides, John Dewey and Jeremy Bentham walk into a room … no this is not the beginning of a joke, it’s the setup for “Meeting of Minds,” the culminating project of my Tikvah class. Each philosopher sits around a table and speaks in such a way that you would never be able to tell that these were students portraying characters, rather than the characters themselves.

Tikvah, a class based on Jewish and secular philosophy and American literature, is known for its intensity, but this program is particularly time-consuming and difficult. However, when done right, it can be quite enjoyable as well. The premise of “Meeting of Minds,” which is the final project of the class’ ethics unit and is based on a television show from the 1970s, is that each student picks a scholar or book character that the class has studied, researches him or her and then completely embodies the person in a scripted conversation among the whole class. One student, however, does not become a character, but rather acts as moderator of the discussion. In this case, the topic of discussion was the Gilad Shalit swap of 2011, in which Hamas released Shalit, an Israeli soldier, in exchange for 1,027 prisoners from Israel. The moderator acted as Benjamin Netanyahu, Israel’s prime minister, organizing a cabinet meeting with intellectuals throughout history. Each student’s task was to argue based on his or her philosophers’ views on ethics, and come to some conclusion by the end of the double-period debate.

“We showed them YouTube videos of Steve Allen’s ‘Meeting of Minds’ shows and we said, that’s what we want you to do. We threw them into the deep end, and they not only rose to the surface, but they swam.” -Dr. Elieen Watts

On the day of the debate, everyone dressed up, using whatever supplies he or she had to look somewhat similar to his or her character. I struggled with this part of the event; I am not sure if you have tried, but dressing up as C. S. Lewis is quite difficult when you are a short, non-bald, teenage girl. Then, equipped with our 58-page script, we read/acted/delivered our lines, bantering with each other as we assumed the philosophers would had they been contemporaries. Although it took over an hour to perform, it was thrilling not only for our audience of upperclassmen and teachers, but also for the students themselves.

The original purpose of this program, which was started last year, was to give the Kohelet Yeshiva High School students a “wider range of opportunities and ways to express themselves if only because not every student expresses themselves most effectively in the written word,” noted Rosh Beit Midrash of Kohelet and co-teacher of the Tikvah class, Rabbi Tzvi Sinensky. Dr. Elieen Watts, English department chair and fellow teacher of the class, agreed, saying that the point of the program was “to get everyone to really embody a point of view and to be able to manipulate in their minds the philosophy of one figure and to be able to become that figure, to argue as that figure with other figures. And it’s the ultimate integration.” These goals that Dr. Watts and Rabbi Sinensky set were really the only foundation we had as students. We were essentially thrown into the project and were asked to figure out how to tread water, with no rubric or rules. However, on this Dr. Watts said that she and Rabbi Sinensky continued the program the same way this year despite this detail: “We showed them YouTube videos of Steve Allen’s ‘Meeting of Minds’ shows and we said, that’s what we want you to do. We threw them into the deep end, and they not only rose to the surface, but they swam.”

The students who participated in “Meeting of Minds,” the current seniors and juniors, likewise felt that these goals were accomplished even without, and maybe because of, the inherent freedom of the program. Max Wolff, a member of this year’s class, said, “Meeting of Minds gave me a more in-depth understanding of the various philosophers we mention in class.” He continued saying that, “by taking the different ethical theories and applying them to a real-life scenario, it made the philosophies seem more relevant, rather than the ancient ramblings of academic elitists.” The moderator of this year’s class, Daniel Meadvin, added his own perspective because “as moderator, I was able to explore our topic through a wide variety of lenses, as I pieced together everyone else’s opinions.”

“By taking the different ethical theories and applying them to a real-life scenario, it made the philosophies seem more relevant, rather than the ancient ramblings of academic elitists.” – Max Wolff

“Meeting of Minds” did have flaws at its outset, but in the end it really benefitted the students. I can honestly say that although I was anxious for the months leading up to the event, I believe that it was quite the success. Wolff felt the same way. He said, “Not having a rubric gave us the opportunity to structure the entire script ourselves. It was immensely satisfying to see us start the project floundering around, and slowly collect our thoughts into many, many Google Docs.” In terms of improving the assignment, Dr. Watts noted exactly what the student did. She said, “We take our cues from the students. We don’t know, we don’t experience the process. So what we heard from you is that you wanted more lead time. So that’s an easy fix.” Rabbi Sinensky added, “One of the things we decided for this was that we were not going to allow grading to interfere with the quality of the students’ learning …We felt that each group could rise to the occasion and produce something of tremendous substance. At in the end of the day, we wanted the learning to not be beholden to the grading.”

Evidently, the program is strong and the hope for next year is equally so. As a student in this year’s Tikvah class, I was terrified of “Meeting of Minds” when I first learned about it. I thought it was just another mode of public speaking that would be hard work and as crippling as any other public speaking. I was dreading the event and secretly hoping it would somehow be forgotten or I would miss it. However, that did not happen and it was absolutely wonderful. In the process of participating, I grew closer with my classmates, enjoyed myself and learned an incredible amount about my philosopher, C. S. Lewis, whom I chose because of his being an author, which is something I’d like to become. I had a great excuse to read his books on ethics and study his religious and philosophical beliefs, many of which I realized I agreed with. Although the lack of structure was at times intimidating, it was ultimately more freeing than limiting. I think it should continue to be a part of our school for many years to come, and I look forward to what next year’s juniors do with it. Perhaps future students (in Kohelet or in other schools, if it spreads) will completely change the program, but who knows? The point is, it is up to them to take the criteria, make it you’re their own, work hard and most of all, have fun!