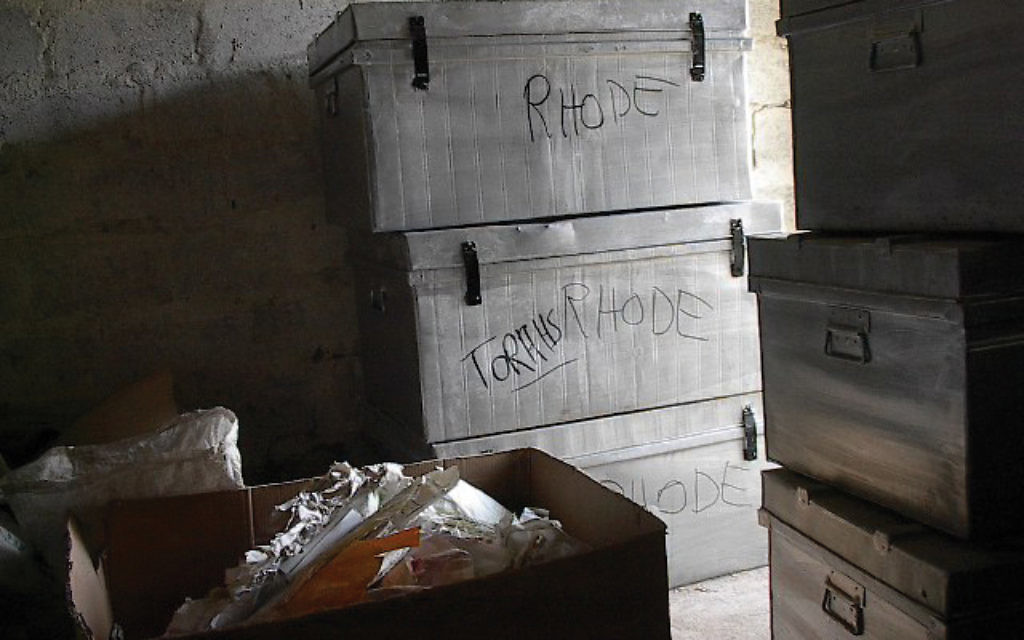 The treasure trove of materials tells the story of the rich history of Iraqi Jews, stretching back 2,500 years to Babylonia. There are Torah parchments, a Hebrew Bible with commentaries from 1568, a Babylonian Talmud from 1793 and a Passover Haggadah from 1902.

The material, believed to have been seized by former Iraqi strongman Saddam Hussein, was found in the flooded basement of Iraq’s intelligence agency in Baghdad two months after the March 2003 U.S. invasion of Iraq. Eventually rescued by U.S. troops, it was preserved and restored at the National Archives and Records Administration in Washington, with help from philanthropists and foundations as well as $2.9 million in federal funds.

Now, as the trove is about to go on view at the National Archives, the prospect that the material will be returned to Iraq after the show — under an agreement between the U.S. and Iraqi governments — has sparked anger in the Jewish community.

Harold Rhode, who discovered the trove while working as a Defense Department policy analyst assigned to Iraq’s transitional government, said he is “horrified” to think the material would be returned when it had been “stolen by the government of Iraq from the Jewish community.”

“It would be comparable to the U.S. returning to the German government Jewish property that had been looted by the Nazis,” he told The Jewish Week.

Attorney Carole Basri, whose great-grandfather served as chief rabbi of Iraq, pointed out that there was “no consultation” with the Jewish community before the Bush administration entered into that agreement. International law stipulates that national treasures be returned to the country of origin.

Rhode said the material, which been stored on the second floor of a Baghdad synagogue by Iraqi Jews at the time of their mass exodus in 1950-52 – some 135,000 Jews left the country, allowed to carry no more than one suitcase of clothing each – was taken by Saddam Hussein in 1984. (There are thought to be only five or so Jews left in all of Iraq.)

Joseph Dabby, 67, an Iraqi Jew in Los Angeles who was one of about 25,000 Jews who initially remained in his homeland, said he fears that should the items be returned, they would simply be locked away and never exhibited. Board chairman and former president of Los Angeles’ Kahal Joseph Synagogue, home to 300 Iraqi Jewish families, said he escaped from Iraq in 1971 after several imprisonments and does not trust the present Iraqi leadership.

He dismissed the claim of Saad Eskander, the head of the Iraqi National Library and Archives, who reportedly met with U.S. officials in 2010 to promise that the archives would be prominently displayed when returned.

“In Iraq today there are 300 old [Torah] scrolls that were supposed to be exhibited in the Iraqi National Museum but have been kept in its basement buried in dust,” Dabby said. “Nobody cares about them.”

He pointed out that Iraq has “shrines to three important Jewish prophets” and that the U.S. government gave Iraq $3 million with which to restore them. But he said a recent newspaper article about the Tomb of Ezekiel said all Hebrew lettering has been erased, that Ezekiel has been turned into a Muslim prophet, and that the tomb has become a Muslim shrine.

“Where is the pride in keeping Jewish heritage in Iraq?” Dabby asked.

Gina Waldman, president and founder of Jews Indigenous to the Middle East and North Africa (JIMENA), said she is “very grateful that NARA took [the material] and is restoring and digitizing it because it probably would have been lost.”

Waldman agreed that the material does not belong to Iraq but was “illegally expropriated from the Iraqi Jewish community. … We never saw the archives, but we understand they include the school records of individuals who have a right to claim them. And there is communal property, some very old. The fact is that they do not belong to the Iraqi government. They were taken from the Jewish community. What were they doing in Hussein’s secret police headquarters?”

“The archives,” Waldman pointed out, are “a symbol of what happened not only to Iraqi Jews but to those in Syria, Lebanon, Yemen and Libya. It is estimated that close to 850,000 Jews were forced to flee [their Arab homelands] and, like the Jews of Iraq, were told they could leave but had to give up their citizenship.”

She added that the “Iraqi government needs to show goodwill, and we hope the U.S. government will play a constructive role to convince the Iraqi government that it would be in the interest of all parties to see the material go to the Jewish heirs.”

It was shortly after the “Shock and Awe” campaign that began the U.S. invasion of Iraq in the spring of 2003 that a tip led Rhode to the trove of sacred Jewish books, Torah parchments and other Jewish and Israeli items in the basement of Iraq’s intelligence agency in Baghdad.

An unexploded bomb had sliced through several floors of the building, rupturing the water pipes and immersing almost all of the material under several feet of water. Rhode realized that drainage pumps and manpower would be needed to retrieve the material.

With the help of Ahmed Chalabi, chairman of the Iraqi National Congress, local Iraqis were hired and small pumps brought in. But Rhode said water from leaking water pipes continually refilled the basement.

Several weeks later and with the help of Natan Sharansky, Vice President Dick Cheney and other senior American officials, the U.S. military finally got involved. The troops pumped out the basement and, in an agreement between the U.S. and Iraqi governments, the material was shipped to the National Archives in Washington. There, it was to be preserved, restored, digitalized and displayed before being returned to Iraq.

Some of the material was to be exhibited beginning Friday at the National Archives, but the show, which was to run through Jan 5, 2014, has been postponed because of the government shutdown. The material was to then be packed up and returned to Iraq before June.

Rabbi Elie Abadie, co-president of Justice for Jews from Arab Countries, told The Jewish Week in a statement: “While we appreciate the intervention of the U.S. government in rescuing these Jewish archives, the agreement … to ultimately return this collection to Iraq was based on a flawed premise: that the archive is part of Iraq’s national heritage. In fact, it is the patrimony of Iraqi Jewry and must be returned to its rightful Jewish owners.”

Attorney Basri said her grandfather ran a high school in Baghdad during World War II; she believes some of the school records being digitized are from that school. But Basri said she does not know for certain because the U.S. government has refused to disclose an inventory of the material it holds.

Doris Hamburg, director of the preservation program at the National Archives, was not available for comment because of the government shutdown.

But among the material to be displayed are 24 items illustrative of the Iraqi Jews’ rich past.

Maurice Shohet, president of the World Organization of Jews from Iraq, said his group is working with Hamburg, “the Iraqi government through its embassy in Washington, and the State Department to secure the preservation and digitalization of the material because it is filled with mold and is in bad shape.”

Preservation and restoration work on the material began even before the material was flown to the United States in 2003. Shohet said individuals and foundations contributed money for the work and that in 2011 the U.S. government contributed $2.9 million.

He said that about 60 percent of the material has already been preserved and digitized, but that some of the material is beyond repair, including 48 parchments that were part of a Torah.

“There are no Torah scrolls, only damaged parchments that can’t be restored,” Shohet said. “We want to bury them in our plots at the New Montefiore Cemetery [in West Babylon, L.I.]. We got approval for that from the Iraqi government, and we are awaiting a delegation from Iraq that wants to participate in the burial process.”

The remaining 40 percent yet to be preserved is a “significant amount when you are talking of such a large amount of material – some 2,700 books and thousands and thousands of documents,” he said. “Because of the mold, a lot of documents are still attached one to the other, and we don’t know if they cover different subjects.”