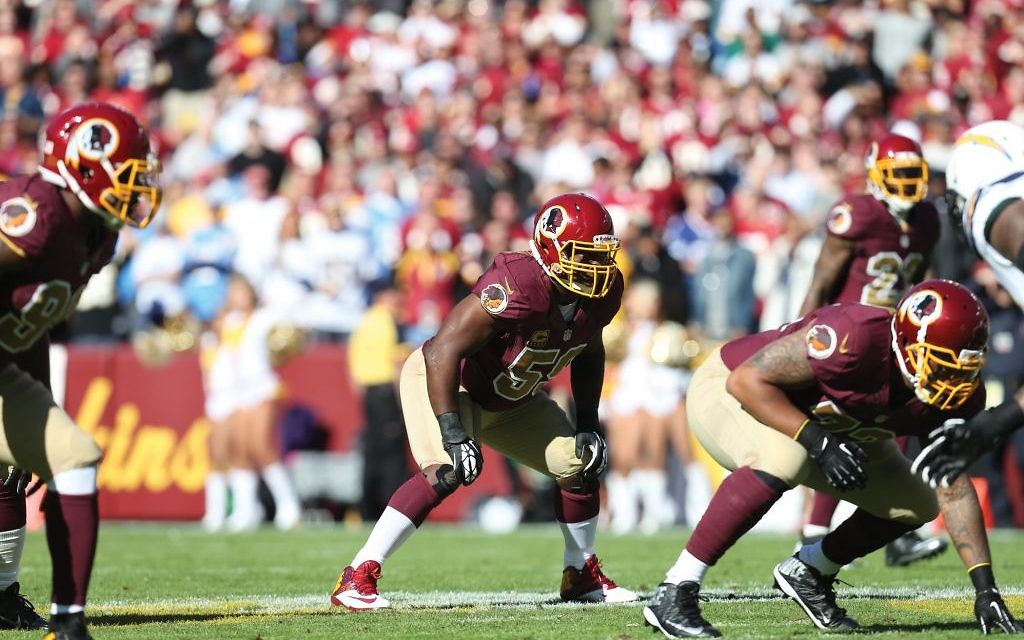 The rain dripping from his uniform provided an unceremonious end to London Fletcher’s career as the Washington Redskins linebacker headed to the locker room following a recent road loss to the New York Giants.

His team’s last-place finish was hardly the idealized final walk off the gridiron for Fletcher as a professional player.

But his 16-year National Football League career might never have launched were it not for Charlotte Kramer and Leonard Schwartz.

The Cleveland philanthropists first met Fletcher when he was a sixth-grader in the city’s East Madison Elementary School — one of 71 to whom the Jewish couple promised college tuition assistance. He would be the student they got to know the best.

Fletcher would graduate from John Carroll University; make the NFL as an undrafted free agent; star at linebacker for the St. Louis Rams, Buffalo Bills and Redskins; win one Super Bowl and compete in another; and play 256 consecutive games, fourth most in league history.

“I had the drive and determination, but the resources and opportunity they provided made it a lot more feasible,” Fletcher, speaking of the couple, told JTA in an interview two days after his final game. “Some of the things they exposed me to gave me more of a drive and hunger to succeed. I knew the way of life I wanted to have and what I needed to do to attain them.”

Fletcher, 38, seized on the opportunity to ultimately earn a life far beyond what his childhood seemed to offer. A Sports Illustrated profile last August described a string of family tragedies, including the rape and murder of his teenage sister in Fletcher’s Superior neighborhood, where crack cocaine and gunfire were prevalent.

Role models — notably the director of the local recreation center, where Fletcher excelled at basketball, and the mentoring couple — encouraged him to seek success.

Fletcher’s accomplishments are gratifying for Kramer, 94, who has maintained contact with him over the years but never attended any of his football games.

“It’s been a really fruitful, delightful relationship. He’s a warm, smart young man,” Kramer said from her winter home in Palm Beach, Fla. “He has a very nice wife and lovely children.”

Kramer says many she mentored “didn’t make it, but London certainly did.”

“He has many opportunities now, [and] I think many people will want him on their team — and I don’t mean an athletic team,” she said.

The family of Kramer — she is a life trustee of the Jewish Federation of Cleveland — has made quite a team itself philanthropically in the city and beyond. Her father, Samuel Rosenthal, established a charitable foundation that grew out of his business manufacturing industrial uniforms, the Cleveland Overall Company, which became the Work Wear Corp.

Her son, Mark Kramer, established Foundation Strategy Group, a consultancy for charitable giving, and two of his children work for nonprofit organizations.

The mentoring program that propelled Fletcher on his successful career path grew from the Milton A. and Charlotte R. Kramer Charitable Foundation established by Kramer and her first husband.

The foundation and another set up by her late brother, Leighton Rosenthal, endowed the Jewish studies program in their father’s memory at Case Western Reserve University. The ballroom at the Cleveland Heights Park Synagogue, where Kramer still attends Sabbath services, also is named for Samuel Rosenthal.

Following the 1980 death of Milton, Kramer established a law clinic in his memory at Case Western, where law students assist indigent clients. Other recipients of her foundation’s largesse include the city’s symphony orchestra, art museum and botanical garden.

The family’s charitable involvement goes back 100 years, says Steve Hoffman, the Jewish federation’s president. He calls the Kramers “one of the great families of Jewish Cleveland, and of Cleveland” generally.

“When I got into the position [to] reach back and help others … I used those examples and exposed [students] to different experiences,” he said.

The experiences have included meetings with members of Congress, dining at nice restaurants, visiting the Newseum in Washington and attending special preparatory classes for the pre-college Scholastic Aptitude Test.

As a young man in Cleveland, Fletcher attended his first plays, concerts and recitals because of Kramer’s involvement.

“They took me to see the Cleveland Orchestra. I fell asleep!” Fletcher recalled, hastening to add that he quickly awoke once the Harlem Boys Choir began singing.

In the “first real restaurant I went to,” Fletcher said, he enjoyed the taste of cheesecake so much that he ordered a second slice.

Fletcher would devour innumerable ball carriers during a career in which he made the Pro Bowl four times, recorded 39 sacks and more than 2,000 tackles, solo and assisted, intercepted 23 passes and even scored two touchdowns.

Fletcher and Kramer last saw each other shortly before the start of this season at the wedding of another student from the mentoring program. They intend to get together in the coming months during Fletcher’s first postseason without thinking about the football season to follow.

“I don’t know where I would be without her support and her husband’s,” Fletcher said. “They’ve remained a part of our lives.”