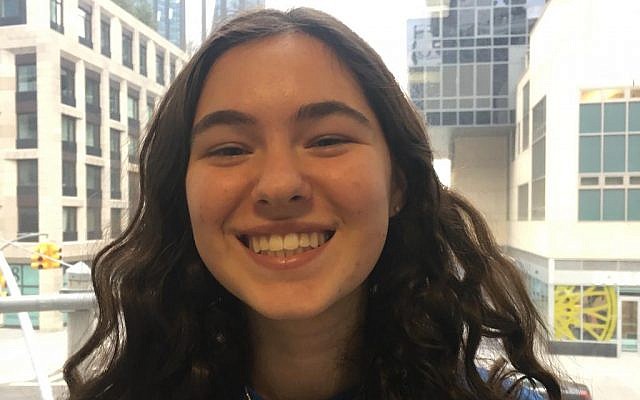 On a recent tour through the Christian Quarter of Jerusalem’s Old City, our guide introduced us to the life and times of Jesus. We learned that before Jesus entered Jerusalem he stood on the top of Mount Zion, and from there he could see the Beit Hamikdash (the Second Temple). Jesus witnessed the verbal and physical fighting between the Sadducees and Zealots, two ancient sects of Judaism. When Jesus saw the Israelites fighting among themselves, he wept for the divisions within the Jewish people, and predicted the downfall of the sacred Beit Hamikdash.

While I sat with my friends over falafel, I couldn’t help but think how little things have changed since then.  As a participant of Tichon Ramah Yerushalayim, the Conservative Movement’s Camp Ramah high school semester in Israel program, I am proudly egalitarian — a daily tefillin wrapper and tzitzit wearer. With the new month of Adar upon us, the women in our group were excited to join the Rosh Hodesh celebrations of Women of the Wall on March 8th at the Kotel. One can only imagine how deflated we were when we were told that we no longer had permission to attend due to the predicted clash between WoW and thousands of ultra-Orthodox youth who were being bussed in to protest against the planned prayer service. These fears proved to be well-founded as news reports emerged of verbal and physical violence at the Kotel.

Still, my disappointment at being prevented from attending the service was trivial compared to my sadness at the disunity within the Jewish people. Naturally, we look for a source to blame for the mayhem at the Kotel. We instinctively choose a side, stick with that side, and believe that the other side is outrageous and completely inappropriate. What if we didn’t direct our anger toward one side? What if we acknowledged the validity and flaws of both sides? And what if, in the words of Rabbi Abraham Joshua Heschel, we accepted that  “all are responsible.”

I refuse to be angry at the Haredi protesters, and I refuse to be angry with the WoW worshippers. I mourn the fact that our people have split into sects so extreme that they inflict chaos and violence at a place meant for holy prayer and unity. There was fighting among Jews in this place before, and now our people are split again, no different than the Sadducees and Zealots. Once again we act with intolerance toward one another. Once again we have forgotten than no one person or group is in possession of absolute truth or of God’s will. Once again, we have forgotten to have productive conversations with one another. Once again we are on the verge of falling into the abyss of violence and senseless hatred.

How ironic that during this month of Adar when we are commanded to be joyous and remember the resilience of our people, I am mourning the disunity of what we have become. I mourn the transformation of our holiest site to a place of aggressive political demonstrations. I mourn how we have forgotten the value that “proper behavior precedes the Torah.” This means that the strength of our faith is not only measured by the degree to which we respect tradition but also according to the level of respect with which we treat others who have ideas different than our own. When we fail to remember the core Jewish demand to treat every human being as a person created in God’s image, we become unable to truly preserve any other Jewish value.

The contemporary threat to Judaism is not Women of the Wall who question ancient gender roles in Judaism. It is also not the ultra-Orthodox who want to remain fully immersed in their ways. The threat is how we treat one another.  Disagreement, or “machloket,” has always been a fundamental aspect of Judaism. In fact, our Talmud is a compilation of disagreements on Judaism. But underneath the Talmudic disagreements there was mutual respect. The possibility of Judaism radically evolving has constantly been there. Opposing ideologies have always existed in Judaism. Our faith is meant to be challenged and to be upheld meticulously. Our task is to remember that pluralism in Judaism is a natural and beautiful thing, and it is only when we forget how to respectfully coexist among the different sects and theologies of our religion that Judaism is threatened.

We do not have to change our practices. It is actually very important that we are all confident in our divergent customs, but we do have to change our instinct to defend only one side. We must teach ourselves to not immediately assume one denomination is “right,” and all others are mistaken. Modern Judaism is made up of many branches. When one branch is rejected, the whole tree is weakened. It is imperative to realize that all of the branches grow from the same trunk and the same roots. It is only because the branches have each developed and stretched out in different directions, that the tree of Judaism can be beautiful, healthy, and wholesome.