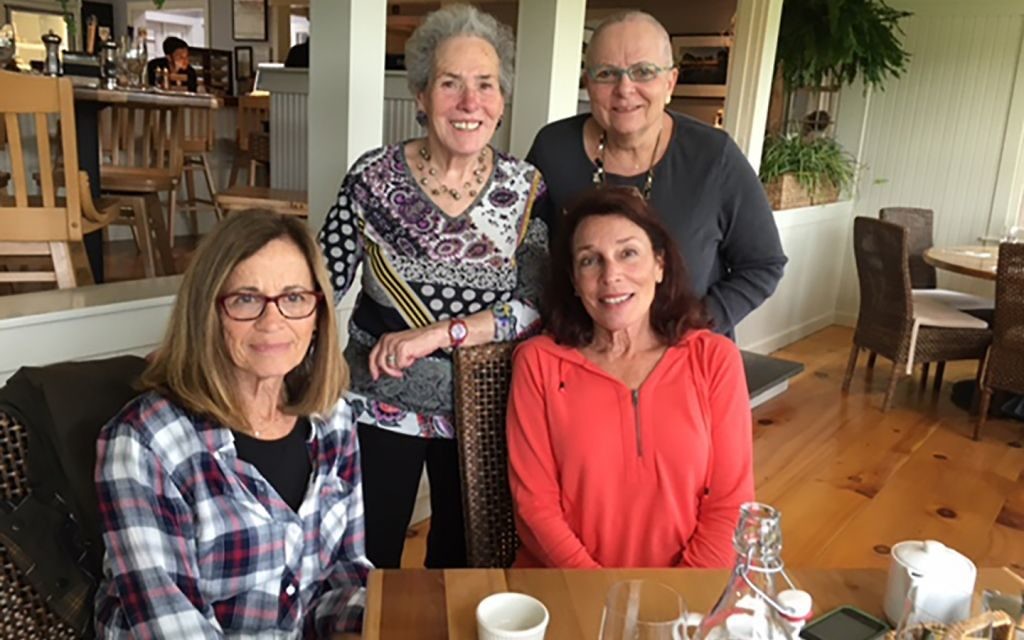 During the years when Bonnie and Bob George were raising four children, working full-time in New York City and organizing activities at their Westchester synagogue, they often dreamed about a simpler life on Martha’s Vineyard.

“I always knew I wanted to live here; I always felt it was going to be my place,” Bonnie George said of the Massachusetts island where her family had long vacationed, a place so rural it has no traffic lights. “But it was never the right time.”

In 1998, the time was finally right when George resigned as director of admissions at Manhattan’s Ethical Culture School. Now she and Bob, a semi-retired financial planner who works from home, happily wake up to ocean breezes. “It was something that I really wanted to do,” said George. “It was so exciting for me.”

The Georges are part of a retirement trend that is transforming summer resorts along the East Coast and beyond, from the Hamptons to Hilton Head. Their own parents may have decamped to Florida or stayed put near the grandchildren, but more and more Jewish baby boomers are retiring to their summer vacation spots.

In what is often more an emotional decision than a practical one, couples like the Georges – no longer tethered to jobs or childrearing — are fulfilling a longtime dream. But even as their presence reinvigorates small-town Jewish life, these retirees confront the challenges of adapting to areas that are, in most cases, considerably more rural than the suburbs or cities they leave behind.

Forget taking classes at the local college; a Philharmonic concert or surgery at a top-flight hospital now requires a major excursion. The payoff, say retirees like the Georges, is the opportunity to be part of a picturesque community with a distinctive local identity and a relaxed way of life.

While there are no statistics on the vacation-retirement trend, many summer destinations report huge increases in the senior population and a steady uptick in the number of new year-round residents in their 50s, 60s and 70s. According to a 2014 survey by the UMass Boston’s Center for Social and Demographic Research on Aging, that state’s traditional getaway spots – Cape Cod, the Vineyard, Nantucket and the Berkshires – are experiencing substantial increases in the 60-plus crowd, which by 2030 is expected to rise 50 percent or more, making seniors a third or more of the population.

While large cities often skew younger, small, historic Charleston, South Carolina is among those tourist destinations that have experienced a large influx of Northeastern Jewish retirees, said Jewish Federation CEO Judi Corsaro. “I’ve been here for 25 years, and this is a trend,” said Corsaro, who noted that lower property costs and warmer weather are a draw for the 50 new residents who settle daily in one popular neighborhood, Mt. Pleasant – but so is the rich sense of Jewish history, something often lacking in traditional retirement communities like Florida or Arizona.

Another fast-growing South Carolina destination popular with retirees, Hilton Head Island, is aging at three times the national rate, according to recent census data published in the Island Packet, a local newspaper. Like many resorts, Hilton Head welcomes its silver-haired newcomers, who arrive with incomes nearly twice the local median and don’t add costly children to the public schools. About one-third of island residents are currently older than 65 – up from 24 percent in 2000 – and just 17 percent were born in the state, with more than a quarter of new arrivals coming from the Northeast.

One of those is the winter resident Rose Valentine, who is part of a growing senior contingent at the Reform Congregation Beth Yam. “It’s very mellow,” said Valentine of the Southern island, known for its golf courses. “It has a lot of history, a lot of plays come through Port Royal, and it’s not so far away from my children.”

But Valentine’s real getaway was always Long Beach Island, the barrier isle off the Jersey Shore where her family vacationed. Fifteen years ago, the Roses – now in their mid-70s – sold a suburban Livingston house and retired to their beach home. The children and grandchildren visit often, and the Roses have found plenty of Jewish company: Retirees and empty nesters now make up approximately 80 percent of the 325 families who belong to the JCC of Long Beach Island, where Valentine is an active past president.

In the nearby shore towns of Margate and Ventnor, so many boomers have traded summer homes for year-round retirement that Jewish Family Service of Atlantic and Cape May Counties has retooled its senior program for an influx of younger, more active retirees, said JFS spokeswoman Beth Joseph. In the past, “Village By The Shore” provided longtime older residents with services like transportation and meal delivery, she explained. “But more and more people are wanting the socialization – the yoga, the art, the luncheons, the volunteer opportunities,” said Joseph.

For many destination retirees, who leave behind old friends and Jewish activities, the temple or JCC becomes a social as well as a religious anchor. In a one-synagogue resort town, the mission of a place like the Martha’s Vineyard Hebrew Center is to offer myriad social, cultural and religious events aimed at an increasingly diverse membership, noted George, who is currently vice president (and was bat mitzvahed there in a group ceremony 10 years ago).

At the Jewish Center of the Hamptons on the East End of Long Island, executive director Diane Wiener noted that in the absence of nearby universities, the rural synagogue – which offers 10 classes each week — fills an outsize need for educational and cultural programming.

“This congregation has always been attractive to retirees because of its wealth of adult ed – and because it offers a caring community, a support network and people with similar interests,” said Wiener, who estimated that year-round membership has swelled from about 20 percent five or six years ago to about a third of the 350 families, with nearly three-quarters of those over 50. Across the East End, retirees are getting both more numerous and younger, Wiener observed; many spouses are semi-retired or telecommuting.

Among the year-round settlers are Sandy and Paulette Balsam, retired teachers from Nassau County who savored years of vacations in East Hampton before moving full-time in 1997. Retiring to a place you already know eases the social transition of uprooting, observed Paulette: “We didn’t have to start all over making friends,” she said. “We know all the ins and outs, where to shop, good places to eat.”

Like many resort-town retirees, the Balsams were also drawn by an urbane cultural scene that belies the rural landscape. Lincoln Center may no longer be nearby, but the Hamptons draws a world-class roster of musicians to its summer festivals; in the Berkshires, seasonal theater attracts major stars, and local museums have collections befitting a major city.

But as sophisticated as the arts may be, medical care in a tourist town is often wanting, as small-town hospitals scramble to meet complex geriatric needs. Other challenges may include a high cost of living, limited shopping and resources, and the inconvenience of traveling to and from an island.

And while grown children may be more inclined to visit, those in their professional prime are unlikely to live nearby. “The hardest part about it is that you don’t see family quite as much,” acknowledged Bonnie George, who makes visiting her seven grandchildren a priority. On the Vineyard, “you don’t have the choices that you have off-island, though online shopping has made that much easier.”

Valentine and George both said a recurring conversation among retirees is whether they’ll eventually have to move away, to be closer to hospitals and children as health declines. “For serious medical things, a lot of people go back to their home areas,” said Valentine. “But I think people hang in here as long as they can.”

That’s because, she explained, the challenges of resort living are outweighed by the rewards. “We always say, we leave our troubles on the mainland when we cross over here,” said Valentine. George concurs: “After I’m in New York for three days, I’m so ready to come back…You get off that ferry, and your shoulders just drop three inches.

“There’s something about those seven miles of water that separate you from the rest of the world,” George added, “that is very soothing psychologically.”