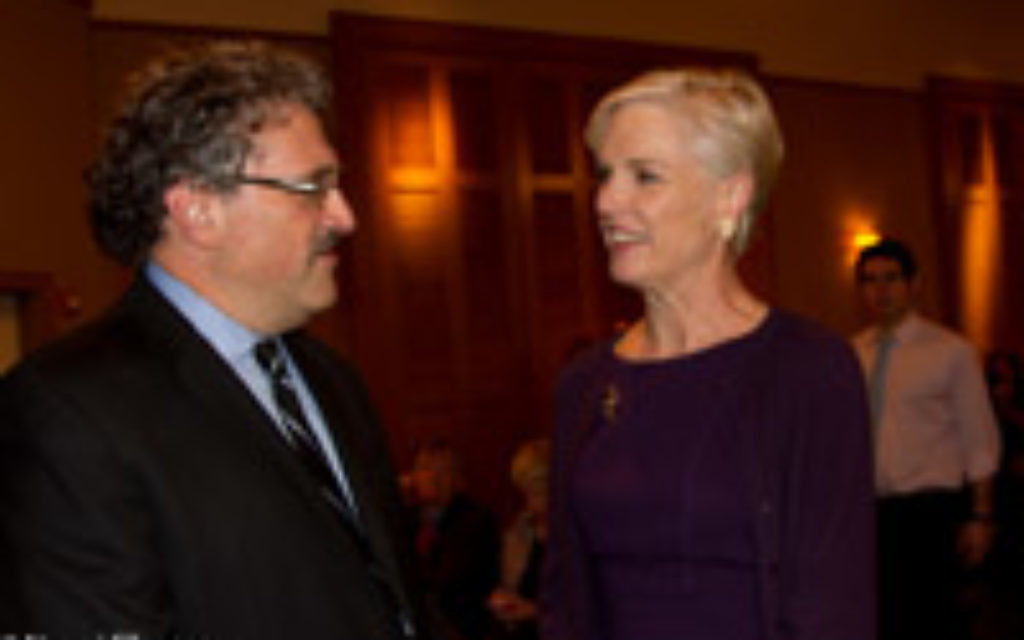 The senior rabbi of Manhattan’s Congregation Rodeph Sholom says he doesn’t want to sound “too partisan,” and neither does the organizer of a forum hosted by his synagogue Monday night, “The War on Women: What’s at Stake and What You Can Do.”

But the 600 people who filled the synagogue’s basement auditorium to attend the event had no such reluctance when the evening’s keynote speaker, Cecile Richards of the Planned Parenthood Federation of America, mentioned her recent visit to the White House.

Richards, the Texas-born president of the federation, told the audience she doesn’t know how much longer she’ll receive invitations to the presidential mansion, a reference to the possibility that President Barack Obama could be defeated in November and succeeded by a candidate far less friendly to the idea of women’s reproductive rights.

“But I’m hoping for a long, long time,” Richards quickly added, winning a round of applause from her listeners, the large majority of them women.

Much of what they said was educational, each offering insight into how his or her own faith views women and reproductive rights. Rabbi Levine, for instance, told the audience that “there’s not one line” in the Bible that would deny women the right to choose.

But the event also came as the presidential campaign appeared to kick off, with both Obama and the presumptive GOP nominee, Mitt Romney, honing their strategies. Both campaigns are trying to appeal to women, whose votes this year could swing the election, and various polls have given the president a significant lead among women.

In light of that, the term “War on Women” has itself become the subject of debate. Democrats are pushing the term, pointing to Republican behavior on both the state and federal levels that they say shows hostility toward women. House Republicans, for instance, have tried to pull all funding from Planned Parenthood and have passed a bill that would allow religiously affiliated hospitals to refuse emergency abortion care to women who’d die without that care. Senate Republicans are opposing the reauthorization of the Violence Against Women Act because of provisions that extend protections to gays, lesbians, transgendered people, Native Americans and battered immigrant women. And on the state level, Republican lawmakers have passed measures that would change the legal definition of rape and that would force women seeking an abortion to undergo a trans-vaginal ultrasound.

Republicans, on the other hand, are calling the “War on Women” a term manufactured by Democrats, and have said that women are faring especially poorly in today’s economy, which, they say, the president has failed to revive.

In an interview with The Jewish Week, the organizer of this week’s forum, Donna Bascom, said she felt an obligation to be “nonpartisan” as the founder and chairwoman of One Voice to Save Choice, an interfaith coalition founded at Rodeph Sholom nine years ago. The group, which advocates for reproductive rights, sponsored the forum and has grown to include dozens of synagogues, churches and mosques.

But Bascom believes there is a “War on Women” taking place, saying that 709 anti-choice bills have been introduced in state legislatures during the past two years and that 81 have become law. She also shows no reluctance to link those efforts to Republicans.

Speaking of Rodeph Sholom, a Reform synagogue, she said the congregation has “strong social values,” but that those values “are not consistent with what we hear from Republicans,” especially Tea Party Republicans.

Similarly, Rabbi Levine told The Jewish Week that “what has gone on” during the campaign for the GOP nomination “will mobilize a lot of people.”

Those views mirror a recent survey of American Jews conducted by the Washington-based Public Religion Research Institute. The institute found that 93 percent of American Jews support legal abortions in all or most cases.

But other issues, including Israel’s safety and security, also matter to many American Jews, including Blu Greenberg, a prominent Orthodox feminist.

Greenberg, who four years ago struggled to pick a candidate and finally voted for Obama, said she’s “torn” again this year. She believes that Democrats “are far more fair and responsible” than Republicans on women’s issues and domestic concerns, she wrote in an e-mail to The Jewish Week. “Some Republicans want to go back to the good old days, which are really the bad old days for women.”

But Greenberg doesn’t believe that Obama “is as good a friend to Israel as he claims to be” or as she “would like to see in a president of the United States.” Before the president receives her vote, she added, he “has to put in real effort to regain the full trust of the pro-Israel community.” Particularly telling, she said, would be his actions on Iran.

Rabbi Levine, meanwhile, acknowledges that American Jews are motivated by all kinds of issues, including the Mideast. His own congregation, he said, certainly includes members for whom concern about Israel is paramount.

But “the No. 1 motivator — more than any one issue — is their desire for a world in which all people feel that their rights and dignity are protected,” the rabbi said. “Whenever everybody’s rights are protected, then so do we feel ours are protected. That’s the kind of society which Jews vote for.”