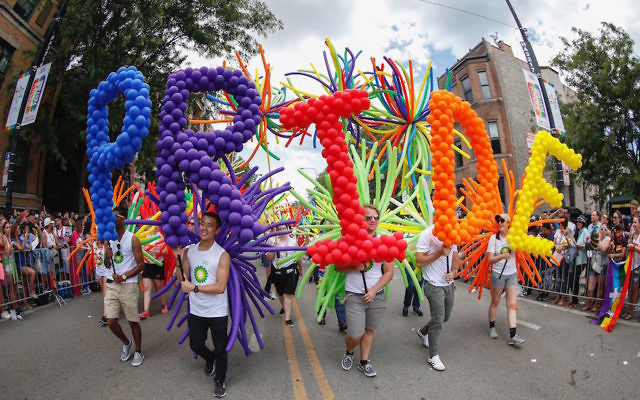 JTA — The journalist who first reported the ejection of three Jewish women from the Chicago Dyke March has been relieved of her reporting duties.

Gretchen Rachel Hammond, an award-winning reporter for the Windy City Times, a Chicago LGBT newspaper, has been moved full-time to the paper’s sales desk as of Monday. Hammond was the first to report that three women were kicked out of the Chicago Dyke March, an LGBT parade on June 24, for carrying rainbow flags emblazoned with Jewish stars.

Organizers of the march say the women were ejected because they were carrying flags reminiscent of the Israeli flag at an anti-Zionist event and had “repeatedly expressed support for Zionism during conversations” with other marchers. Jewish groups criticized the decision as anti-Semitic.

Hammond confirmed that she is no longer reporting for the paper, but declined to say whether she was moved because of her coverage of the Dyke March. She said the shift is not temporary, and that she is looking for editorial work elsewhere.

“Right now I’m in the sales department,” she told JTA Monday. “I’m still a part of the company, and it’s my only source of income. To keep what job I have, I can’t comment on it. As an employee of Windy City Times who has loved the company and loved her role in the company for the past four years, I have to respect my publisher’s decision.”

The paper’s publisher, Tracy Baim, confirmed that Hammond had been moved, but would not elaborate. Regarding the Windy City Times’ coverage of the Dyke March, Baim said the paper’s editors “stand by our reporting by Gretchen and our other reporters on that story.”

Organizers of the Dyke March were critical of Hammond’s reporting on the flags incident. “I thought Windy City Times failed in its journalistic mission [breaking the story] and not looking for a real response from the Collective before putting Laurel’s position out there,” Alexis Martinez, a core organizer with the Dyke March Collective, told Hammond in her last article as a member of the reporting staff.

Laurel Grauer, Midwest manager of programs and operations for the pro-Israel LGBT group A Wider Bridge, was one of the women asked to leave the march. In the first article on the incident, she told Hammond that she and her friends were “harassed” by a number of marchers for waving the star of David flag, which she said “celebrates my queer, Jewish identity.” She later denied assertions by members of the Dyke March Collective that she and the two other women asked to leave were chanting pro-Israel messages or button-holing other marchers.

But according to Martinez, Grauer had come to the march specifically to counter the organizers’ anti-Zionist message.

Both Windy City Times and the Dyke March Collective received threats in the weeks after the incident.