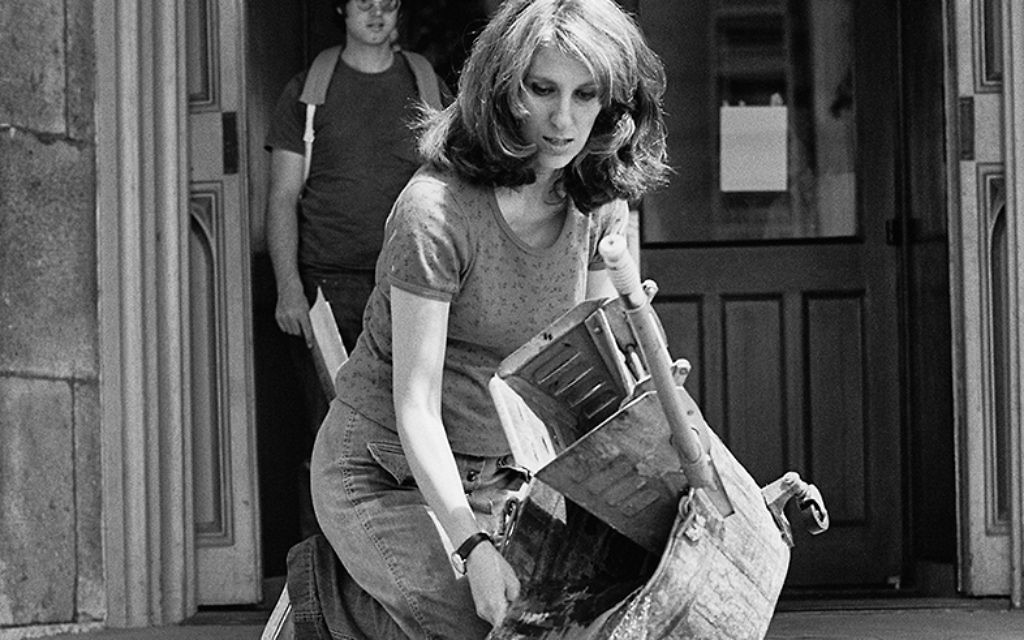 In Mierle Laderman Ukeles’ installation “Birthing Tikkun Olam,” visitors are invited to look in a glass mirror and make a promise to repair the world. The responses are collected and made available for public view.

The kabbalistic story of glass vessels shattering during the creation of the world speaks to Ukeles. In it she sees our collective role of repairing the glass vessels as a hopeful one, having a possibility to ameliorate what is wrong in the world, and to restore.

“Birthing Tikkun Olam” is part of a large-scale retrospective of Ukeles’ work at the Queens Museum. “Mierle Laderman Ukeles: Maintenance Art,” which opens Sept. 18, is the 77-year-old artist’s first survey, and the first time the Queens Museum will dedicate its entire temporary exhibition space to one artist. The exhibit explores the themes central to Ukeles’ career: the role of women in society, environmental sustainability, human agency and civic responsibility.

“Birthing Tikkun Olam” was originally designed for the Contemporary Jewish Museum in San Francisco. In Queens Ukeles will present a performance and panel that will discuss strategies towards repairing the world.

While tikkun olam is sometimes used as a surrogate to replace Jewish ritual, Ukeles is imagining the term and the story as a jumping-off point for public engagement and reflection. She comes to her art and her interest in feminism and the environment as a practicing Orthodox Jew.

The daughter of a rabbi, Ukeles grew up in Denver, and came of age in New York City, where she attended Barnard College, the Pratt Institute and New York University.

When she became pregnant with her first child while she was a graduate student, a teacher told her that she would no longer be able to be an artist. After her daughter was born, Ukeles felt that there wasn’t room for her in society as an artist and a mother. Ukeles rose to prominence after Artforum magazine published her “Manifesto for Maintenance Art 1969!” in 1971. (The original document will be on display at the Queens Museum.) In this manifesto, Ukeles, a new mother, described the dissonance she experienced between the life of freedom and creativity she craved as an artist, and the never-ending monotonous tasks she encountered as a mother and wife. She used the manifesto to expand her definition of art to include domestic labor, calling it “maintenance art,” so that her life as a mother and wife would not conflict with her life as an artist. “I will simply do these everyday things and flush them up to consciousness, exhibit them as Art,” she wrote.

The manifesto sparked a series of important performances in which Ukeles carried out housekeeping tasks at a museum, cooking, washing the stairs, the floors and the vitrines, making this normally inglorious and ignored work public. Ukeles took the dictum, “the personal is political,” to heart. With these acts she pioneered Service Art, a wider art movement consisting of the performance of service tasks.

Soon after, Ukeles became the Department of Sanitation’s artist-in-residence, a post she has held since 1977, for which she is not paid. Through this position, Ukeles has sought to shed light on the work the “sanmen” do to “keep the city alive.” In an email interview with The Jewish Week, Queens Museum curator Larissa Harris remarked, “Ukeles wanted to honor their work, and bring larger awareness to their significance, while reminding the public that they are cleaning up after us!”

Ukeles has used her appointment to advocate for the development of Fresh Kills, the former Staten Island landfill, into a giant public park; she created a large public site-specific environmental work there. She also wrote a proposal for the transformation of Hiriya, once Israel’s largest dump, into a public park.

Ukeles, who has recoiled from being labeled a “Jewish artist” for fear that the term is reductive, has explicitly brought her faith into her art about hygiene. In 1977 she gave a performance called “Mikva Dreams” in which she warmly described the immersion practice. She followed the piece in 1986 with “Immerse Again,” an installation at The Jewish Museum.

As scholar Lisa Bloom points out, Ukeles’ interest in hygiene is tied to Judaism, “questioning how you get ‘clean’; and who’s responsible for everyone else’s cleanliness in the family is a central subject in the heart of Jewish ritual and Jewish law.”

As Harris noted, “Her Jewish faith has fueled a firm belief in the capacity of the human spirit, which is evidenced in her employment of themes of rebirth and ritual washing, but also in the ethics that underpin her entire practice.”