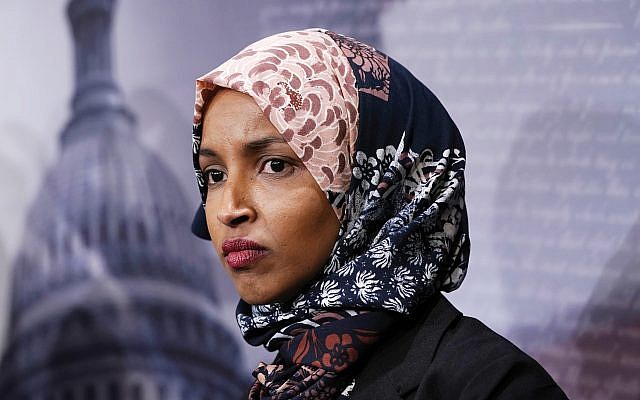 When a major public figure invokes the ancient and scurrilous connection of Jews and money, it is hard to believe they are unaware of the tidal wave of prejudice they are invoking. Nonetheless, I believe that an apology has to be given credence until it is proved insincere. Otherwise, why would anyone bother to apologize?

Therefore I was among those who, although I had severely criticized Rep. Ilhan Omar in the past, was willing to accept her recent apology at face value and move on. (In saying “It’s all about the Benjamins, baby,” she was suggesting that Rep. Kevin McCarthy’s support of Israel was because he was being paid by AIPAC, the large pro-Israel lobby.)

I remind you of her words: “Anti-Semitism is real and I am grateful for Jewish allies and colleagues who are educating me on the painful history of anti-Semitic tropes,” the freshman Minnesota Democrat said. “My intention is never to offend my constituents or Jewish Americans as a whole. We have to always be willing to step back and think through criticism, just as I expect people to hear me when others attack me for my identity. This is why I unequivocally apologize.”

When I saw that, in opposition to many of my colleagues, I argued that we need to give Rep. Omar every chance to grow and to change, the same chance we would wish for ourselves. It was dispiriting, then, to read the following: “At the same time, I reaffirm the problematic role of lobbyists in our politics, whether it be AIPAC, the NRA or the fossil fuel industry. It’s gone on too long and we must be willing to address it.”

First, let’s do a little forensic analysis. The fossil fuel industry and the NRA are both agents of death, nothing less. Whether it is true in reality or not, that is the function they serve in Rep. Omar’s world. In other words, AIPAC is equivalent to polluters of the air and merchants of death. Her apology began to lose its luster.

The annual policy conference of the American Israel Public Affairs Committee is perhaps the largest gathering of Jews in one conference in the world. While many non-Jews also attend, the fact that it is such an enormous gathering of the Jewish community ought to immunize it against cheap shots.

Second, it is not a knee-jerk organization. AIPAC has continually supported a two-state solution — which I trust Rep. Omar does as well — and recently blasted the Netanyahu government for its proposed alliance with Otzma Yehudit, a far-right, racist party.

AIPAC is the premier organization that ties together the United States and Israel in an alliance of mutual interest and mutual ideals. What other country in the Middle East represents the egalitarian, democratic values that prevail in the United States? In a region with savage governments like Syria, Iran, Libya, Yemen and Saudi Arabia, who can the United States turn to for intelligence and shared goals? Were it not for Israel’s military operations, both Libya and Iraq would have nuclear power. There would be no effective check to Iran’s ambitions in the Middle East. Americans do not support Israel because AIPAC pays them to. They support Israel because of values, safety and common sense.

According to a 2018 Gallup poll, 74 percent of Americans have a favorable view of Israel. They do not think Israel is without challenges and problems; but they understand that it exists in the most precarious and unstable region in the world, surrounded by stunted political cultures and violence.

So how does one respond to Rep. Omar’s mischaracterizations? Yes, there will be tweets and blogs, posts and dissents. But the most effective way is to do what I am doing along with my congregation — to join at AIPAC’s policy conference next month. See what the organization really is, not in the eyes of its thoughtless detractors or in the twisted characterizations of haters, but in the flesh. See how many Americans, Jewish and non-Jewish, religious and secular, right and left, join together to celebrate an alliance born of common ideas, common interests, common culture and shared visions. AIPAC is good for Israel, to be sure, but Rep. Omar, AIPAC is also good for America.

Rabbi David Wolpe is spiritual leader of Sinai Temple in Los Angeles. He writes the “Musings” column for The Jewish Week.