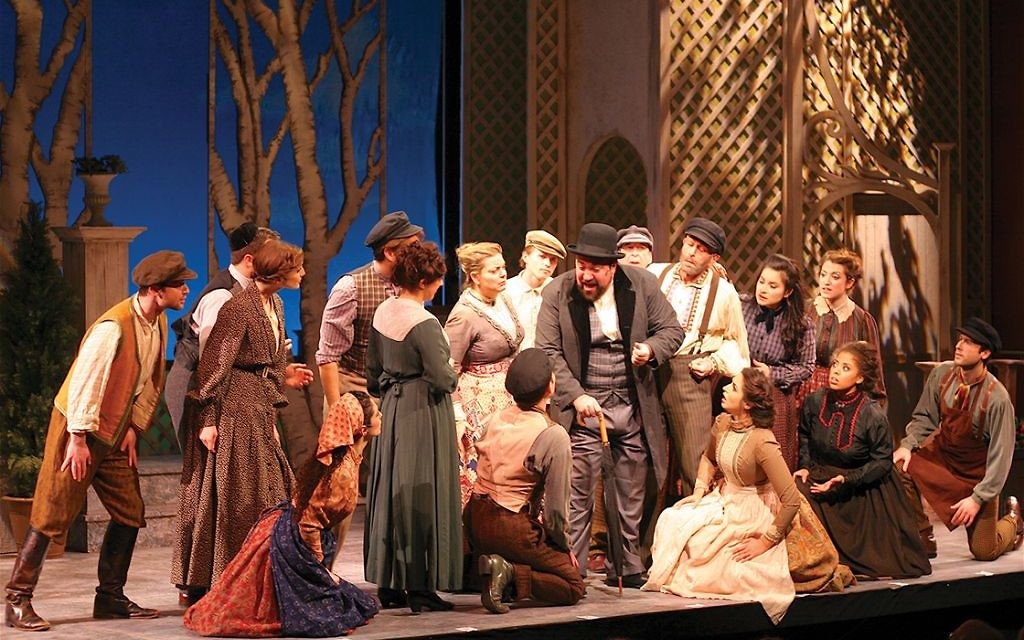 A scene from a Folksbiene revival of “Di Goldene Kale.” Courtesy of Ben Moody

He was a Lithuanian immigrant whose sparkling operettas, which ranked with those of the greatest of European composers, wowed audiences on the Lower East Side and paved the way for the Broadway musical. They even called him “Victor Herbert with a yarmulke,” a reference to the German-raised prolific Tin Pan Alley composer of popular operettas. His name was Joseph Rumshinsky, and he wrote close to 100 light operas, almost none of which have been performed for at least half a century.

But now, with the National Yiddish Theatre Folksbiene’s new production of “Di Goldene Kale” (The Golden Marriage), a forgotten chapter of Yiddish theater has been reopened, one that illuminates how Eastern European Jewish liturgical and folk traditions were gloriously wedded with American musical innovations like ragtime, Tin Pan Alley and jazz.

Rumshinsky was one of a quartet of composers — the others were Sholom Secunda, Alexander Olshanetsky, and Abraham Ellstein — who dominated Yiddish musical theater during the first half of the 20th century in America. “Di Goldene Kale” premiered in New York on Feb. 9, 1923, at the Second Avenue Theater, during the era when the doors to further immigration from Eastern Europe were being slammed shut by the federal government. Arriving when the immigrant population was at its height, and encapsulating the fantasies of Jewish immigrants for success in America, it became one of the most popular of Rumshinsky’s operettas. The new production runs through New Year’s Weekend at the Folksbiene’s new home, the Museum of Jewish Heritage in Battery Park City.

Directed by Brynna Wasserman and Motl Didner, “Di Goldene Kale” is a fairy tale about an Eastern European Jewish girl named Goldele (Rachel Policar) who, having been left as a child in the care of another family, inherits a massive fortune from her father in America. Although many in the village seek to woo her, including the handsome young son, Misha (Cameron Johnson), of the family in which she was raised, she rashly promises her hand to any suitor who can reunite her with her mother.

Meanwhile, Goldele’s millionaire American cousin, Jerome (Glenn Seven Allen), who comes to take her back with him to New York, falls in love with the daughter of her adoptive family, Khanele (Jillian Gottlieb). As the action shifts to New York, the characters must sort out their relationships, both to each other and to an alien society ruled by conspicuous consumption rather than love or loyalty.

Michael Ochs, a retired music professor at Harvard, discovered the vocal lines of “Di Goldene Kale” in 1990 in a Harvard archive; he put them together with the orchestral score, which he found at UCLA. The reassembled operetta was first performed last summer at Rutgers with the help of Zalmen Mlotek, the artistic director of the Folksbiene, who then resolved to bring it to New York. As Mlotek told The Jewish Week, audiences have responded to the piece “as if they were back in 1923, in the original audience,” enjoying the “singable melodies, the humor and the pathos.”

What makes “Di Goldene Kale” particularly exciting, added Didner, the Folksbiene’s associate artistic director, is that it contains “everything that one associates with long-lost Yiddish theater — true love, the long lost mother, the longing for the Old Country, a patriotic scene, and a masquerade ball.” Along with its diversity of musical styles — from Russian and Ukrainian folk songs to opera to ragtime (with echoes, throughout the score, of Jacques Offenbach, Felix Mendelssohn, Georges Bizet, and Gilbert and Sullivan) — it was, Didner observed, “a checklist of what audiences wanted” from both Yiddish theater and European operetta.

In line with the Yiddish theater’s penchant for dramatizing Jewish ritual, Didner noted, “Di Goldene Kale” even contains a Kiddush scene in the middle, in which the Friday night blessing over the wine is chanted in operatic style. Indeed, as Rumshinsky wrote in his memoirs, “Klangn fun Mayn Leben” (Sounds From My Life), he found a “perceptible rivalry” in America between the synagogue and the theater — in the synagogue, “hopping ditties sung, flutes, trombones [and] clarinets are imitated, there is much falsetto singing, there is a stamping of feet, tunes without words are indulged in…” while in the theater, he found “choirs garbed in prayer shawls and skullcaps, Jews bearded, Jews bearing Scrolls of the Law, and a great deal of singing of the accepted liturgical pieces — just as if it were a synagogue!”

This interplay between the synagogue and the concert hall was characteristic of Yiddish culture, according to Hankus Netsky, a composer and ethnomusicologist who founded the Klezmer Conservatory Band. He told The Jewish Week that Rumshinsky’s compositions were so popular that when he had a wedding scene in one of his operettas, “musicians doing weddings in New York would have to play the new tune the next Sunday in their synagogue ceremonies.”

Netsky called Rumshinsky the “Jewish Verdi,” the guy who wrapped up his entire culture and made it into art.” While he “knew that he could make people melt by evoking the sound of prayer, as he did by quoting musically from Kol Nidrei, he was also completely aware of everything that was going on in popular music.” This is why, Netsky said, a well-known Rumshinsky song like “Sheyne Vi Di Levone” (Beautiful As The Moon), can be performed as a rumba or swing number as well as a traditional Jewish tune. “He knew what the Jewish template was,” Netsky explained, “and could extend it in any direction.”

Rumshinsky also had an outsized influence, Netsky said, on American Jewish composers like Irving Berlin and George Gershwin. Berlin attended “Di Goldene Kale” in 1923, where he was no doubt tickled to hear his patriotic 1917 song “Over There” used in the score. And George Gershwin played selections from Rumshinsky’s “Dos Tsebrokhene Fidele” (The Broken Fiddle) in the Catskills in the late 1910s. But Netsky said that Berlin and Gershwin, who had Jewish backgrounds, were merely “stuck with a little bit of residual Jewishness, like a chocolate bar made in a factory that uses peanuts.” But Rumshinsky, he observed, was the opposite. “He came here with both a full Jewish education and full musical education and truly invented American Jewish music.”