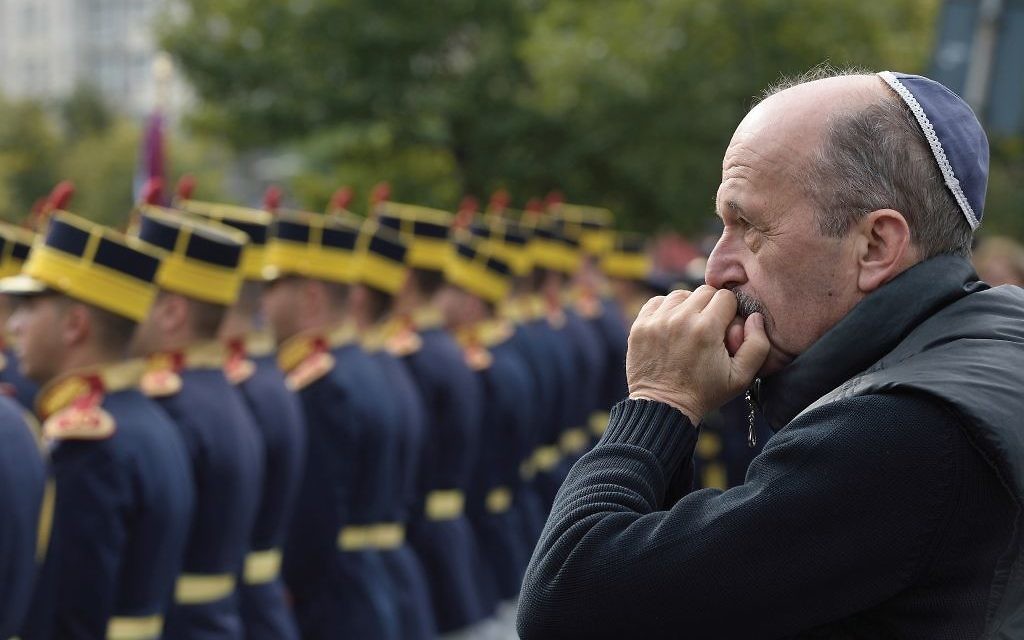 The country, an ally of Nazi Germany from 1940-44, quickly adopted anti-Semitic measures. The army, cooperating with a German Einsatzgruppe, massacred at least 100,000 Jews in the Bessarabia and northern Bukovina regions.Similar mass murders took place in other parts of the country; later, some 120,000 Romanian Jews were deported to their deaths.

In 2014 the government established an annual day of commemoration: Oct. 9, when the deportations of Jews and Gypsies began.

A member of the Romanian Jewish community, above, attends the ceremony this week in Bucharest, the capital. Other memorial events took place throughout the country.

“In Romania, as in other countries, anti-Semitism is present,” the European Jewish Congress reported this week. “In the Romania of 2015 there are Holocaust deniers and people who dispute the crimes committed, by Romanians, against the Jews and the Roma [Gypsies] during WWII. In the Romania of 2015 there are activists working to rehabilitate, revive and promote the memory and the image of the “Miscarea Legionara” and Marshal Ion Antonescu, allies of the Nazi regime.

“But also in the Romania of 2015,” according to the EJC, “we now have legislation that aims to combat anti-Semitism, Holocaust denial, neo-Nazi and pro-fascist propaganda and its symbols.”

The current Jewish population of Romania is estimated as less than 10,000.