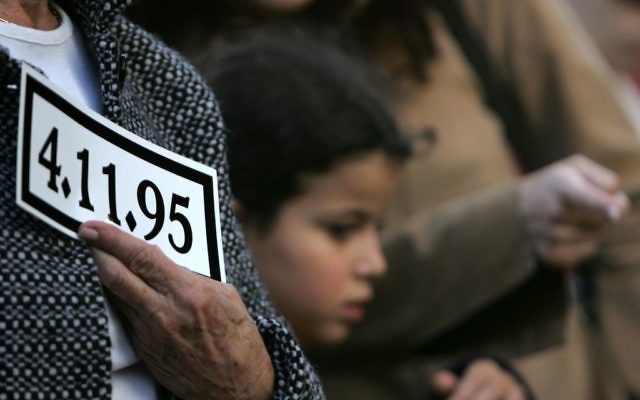 The terrible rise of violence in Israel and the West Bank over the past month has been heartbreaking. Quite apart from the immediate sadness of the deaths and injuries, the incitement from both sides has sharply brought in to focus just how far Israelis and Palestinians are from being able to reach a peace agreement. The violence, combined with the most right-wing government in Israel’s history, as well as weak and ineffective Palestinian leadership, puts hopes for peace at their most distant in twenty years.

Twenty years ago, a peaceful resolution to the conflict seemed imminently possible. At the time I was living in Tel Aviv, a recently discharged IDF soldier at the beginning of a career in journalism. Israel was implementing the Oslo Accords – the peace process that started in 1993 by giving limited self-governance to Palestinians in the West Bank and Gaza. Israeli Prime Minister Yitzhak Rabin signed the accords because he understood that the failure to resolve the Palestinian issue by way of a two-state solution represented the greatest existential threat to Israel and its continued existence as a Jewish and democratic state.

The summer of 1995 in Israel was particularly charged, with many demonstrations against the peace process. There was an atmosphere of incitement against Rabin and his government from right-wingers on the streets, often amplified by the media. I personally experienced this on my daily commute between Tel Aviv and Jerusalem: The main highway was regularly obstructed by placard-waving demonstrators, aggressively disrupting traffic.

Despite all that, the Oslo process was still very much alive, and I believed whole-heartedly in its potential. And so, when I heard that there was a rally happening in Tel Aviv with the headline, “Yes to peace and no to violence,” I knew I had to go.

The rally took place on November 4th, 1995, in the Kings of Israel Square in Tel Aviv. There was an atmosphere of joy in the packed square, where over 100,000 pro-peace Israelis had gathered.

The rally itself was a blur of hope. There were impassioned speeches from politicians, including Prime Minister Rabin, and popular artists sang songs. People were dancing, some euphorically jumping into the water fountain at the front of the square.

I didn’t know it at the time, but the moments shortly after the rally were defining ones for Israel. Three gunshots had been fired, but they could not be heard over the joyful music still blaring from the loudspeakers.

I headed home with a friend about thirty minutes after the rally ended, both of us still elated by the experience and with no idea that anything was wrong. I turned on the TV news. Reports had just started coming in, telling us that Rabin might have been hit by a gunman, and my friend and I looked at each other in disbelief. We had just been at the rally and watched Rabin speak – how could this be happening?

We stayed glued to the TV screen late into the night. We listened in horror as it was reported that Rabin had been killed, assassinated by a right-wing Jew.

The next day, my news editor assigned me to find out information about the assassin, Yigal Amir, by going to Bar Ilan University, where he was a law student. I was on the main highway from Jerusalem when the newscaster on the radio announced that Rabin’s body was being moved from Tel Aviv to be laid in state at the Knesset. I heard that the motorcade carrying his body was heading in my direction. Soon, in the distance, cars began pulling over to the side of the highway. I did the same and, like the others around me, got out of the car and solemnly stood to attention as the motorcade drove by. It was a surreal scene, as my daily route became a setting for collective mourning.

I got back to Jerusalem and filed my story. It was close to midnight by that point, but when a colleague suggested walking over to the Knesset, I knew I had to go. We joined hundreds of Israelis waiting in line to pay their respects by placing a flower or lighting a candle next to Rabin’s coffin. And through a haze of exhaustion, both physical and emotional, I felt a deep sense of solidarity: Israelis of all stripes were with me in line, paying their respects to our fallen hero.

I didn’t fully realize it at the time, but Rabin’s assassination and its aftermath was a defining moment in my life and led to my political awakening: I discovered how quickly things could change, and just how fragile peace could be. And even with all of the negativity that followed, I could never forget Rabin's message of peace, and the unifying sadness that had brought Israelis together when the hope for peace was taken away. It made me realize how much I cared about and loved Israel, and how much I wanted it to be a better place – a place of peace and coexistence, where Jews could live with each other and their neighbors.

Twenty years later, despite all that has happened, this is still the Israel I hope for. I continue to believe that Israel can live up to Rabin’s vision of yes to peace and no to violence.

And so, even as we mark the twentieth anniversary of the assassination with violence and incitement in the headlines, I remain committed to the legacy of Rabin – that of tolerance, optimism, hope, and the pursuit of lasting security and stability for Israel through a two-state solution. May Rabin's vision one day become a reality.