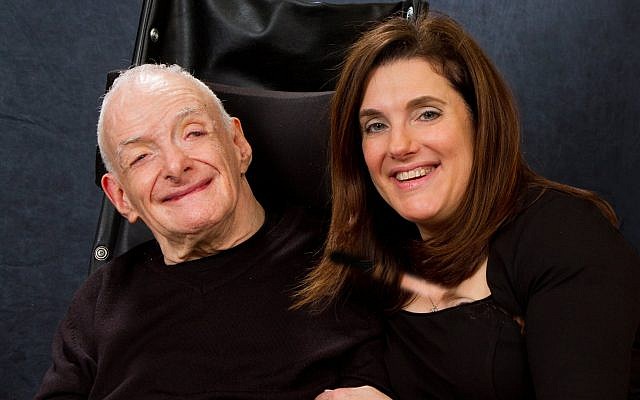 Guila and her father. Courtesy of Guila Franklin Siegel​

Editor’s Note: We are delighted to share this beautiful tribute which is an excerpt from a longer eulogy that Guila wrote for her father.

My father, Sherwood Franklin, embodied the concept of intersectionality long before it was “a thing.”   He lived every minute of his 85 years at the intersection of Judaism and disability.  A son of Brooklyn, he was born with cerebral palsy, and he was to live the entirety of his life without use of his hands, with an unsteady gait, and with slightly slowed speech.  Although many children born with cerebral palsy at that time were institutionalized, my grandparents decided to raise their son at home.  And how surprised they must have been when this profoundly disabled child began to speak, and they discovered that a brilliant, incisive mind was contained within that fragile physical frame.

The doctors recommended that my grandparents move to Coney Island, near the beach, because they felt that walking in the sand every day would strengthen my father’s legs.  What a childhood he had in that neighborhood of working-class immigrant families.  He was blessed with an inclusive, loving family life infused with Jewish faith, spirit and community.  Each Sunday he and his many first cousins would gather at his apartment and then traipse off to Luna Park or, in warmer weather, to the beach.  My dad was completely, seamlessly accepted as part of that group.

This rock-solid foundation gave him the tools to achieve so much in his life, and to triumph over nearly unimaginable adversity.  It was an accepted fact that my dad would go to college and pursue a career of his choosing.  Because he could not use his hands, he wrote and used a typewriter and computer with his toes.  While he was in college he met my mother, also cerebral palsied.  Their disabilities were symbiotic: my father had no use of his hands, so my mother fed him, helped him with all of his activities of daily living, and kept an immaculate home.  She had a severe speech impairment that rendered her unintelligible to most others, so he was her translator to the world, her breadwinner, her advocate.  Together they created a powerful complete unit, built on fierce love, incessant mutual nagging, strong Jewish values, and a shared determination to take on anyone and anything that stood in the way of the life vision they had for themselves.  To the shock and opposition of many, that vision included parenthood. Like my parents, my existence on this earth was far from a given, and yet here I am.  And even my parents themselves may have surpassed their own expectations by becoming beloved grandparents to three wonderful boys. 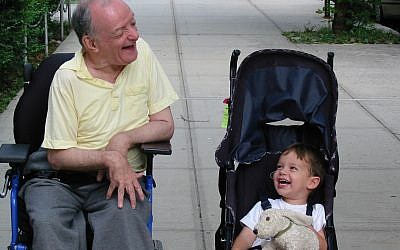 My father overcame enormous obstacles, natural and man-made, most of his life.  In 1970 he obtained an entry-level job with the U.S. Department of Housing and Urban Development.  Had he merely done that, dayenu, it would have been enough.  But he was determined to improve himself, so he went back to school part-time, obtaining two masters’ degrees in government and urban planning at NYU.  He woke every morning at 4:50 a.m., took the bus and subway into Manhattan, worked a full day, and then took the D train down to Greenwich Village for night classes.  Week in, week out, year after year.  On weekends he was so exhausted that he slept most of the day away.  There are many able-bodied people who could not have kept this schedule and accomplished so much.

In the 1980s my father filed several workplace grievances alleging discrimination.  Several years ago I found the files of these proceedings, and what I read broke my heart.  A union report stated that my father’s supervisor had “shown an almost physical disgust with the grievant’s person and his professional efforts and has taken discriminatory personnel actions against him.  He does not understand that the grievant’s difficulties in movement and communication are the result of his condition. He prefers to treat him as clumsy and stupid, if he treats him as there at all.”

To survive such trials, my father had to develop a fighter’s outlook.  He had a reflexive aversion to anyone trying to limit his independence, and he often took umbrage where none was intended.  He could be incredibly consumed by his own struggles and needs, and he was as demanding and judgmental of his child as he was of himself.   He was not always easy to get along with.  I now understand that so much of that came from his struggles and the limitations and indignities that were imposed upon him.

But my father was so much more than his disability.  My father lived and breathed Judaism — Jewish life, Jewish history, Jewish peoplehood, Jewish spirituality, Jewish music, Zionism — the list goes on and on. Despite the hardships involved, he insisted that I attend an Orthodox day school through high school, for which I will be forever grateful.   He was fascinated by Sephardic culture and he adored Ladino music, which he played all the time. He loved cantorial music and Chassidic culture; I grew up listening to the famous chazzans — Yossele Rosenblatt, Moshe Kousevitsky, Jan Peerce, Richard Tucker — and to Shlomo Carlebach, Israeli music, and Yiddish classics.

He was an ardent Zionist, and I regret that he never got to go to Israel himself because of his disability. His deep faith sustained him through a lifetime of physical and emotional pain and struggle. I have never seen anyone daven with such kavanah, openly weeping during the Yom Kippur liturgy. It was my privilege to hold his siddur for him for most of my life, relinquishing that honor only when my husband and three sons came along. I am sure I will never perform a more sacred mitzvah.

He routinely took up Jewish-related causes, with varying degrees of success.  When his childhood synagogue was slated for demolition, he embarked on an unsuccessful one-man campaign to save it from oblivion by having it declared a landmark.  He once wrote to an elected official complaining that one of the oldest Jewish cemeteries in the United States, belonging to the Spanish and Portuguese Synagogue in Manhattan, was being disrespected because the adjacent park had become a gathering place for homeless people and drug users.  “Being a physically disabled person who has finally found employment after 14 years of fruitless searching and struggling, I feel a certain sense of kinship to the people buried at [this] cemetery,” he wrote.  “It should not be forgotten that the Spanish and Portuguese Jews searched fruitlessly for almost two hundred years after being expelled from those countries before finding a haven on these shores . . . . Surely they merit more dignity in their final resting place.”  Intersectionality, in a nutshell.

Very few who met my father ever forgot him.  May he too rest in dignity and peace, knowing that he proved all his naysayers wrong and achieved more than anyone could have ever imagined.

Guila Franklin Siegel is an attorney and Jewish communal professional.  She resides in Potomac, Maryland.