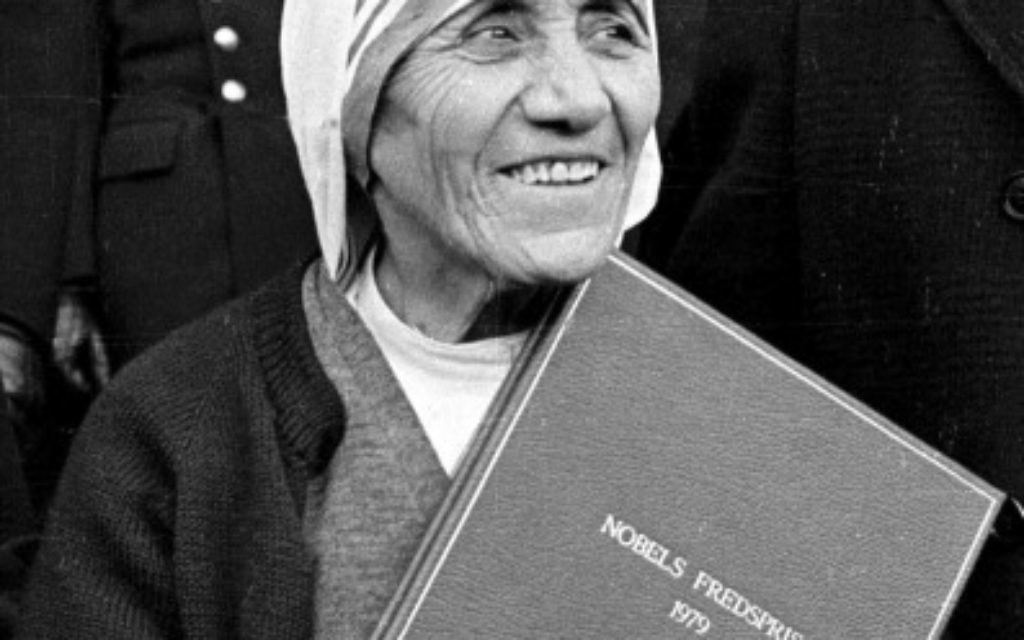 The canonization of Mother Teresa last week brings back memories of an encounter with her some years ago in her Children's Shelter in Kolkata (formerly called Calcutta) India.

At times, it seems as though all 10 million denizens of this eastern Indian metropolis roam the city at once, surging in tidal waves, an urban sea of humanity. It was here that Mother Teresapursued her humanitarian mission for almost seventy years. My wife, Simone, and I have visited Kolkata often setting aside time to plod our way through the cacophonous traffic, along Chandra Bose Road to the calm oasis of Mother Teresa's shelter for children, Shishu Bhavan. We would spend a day or two volunteering to care for the youngsters. The volunteers often included Jewish travelers, who were welcomed as all others, in this Catholic institution. The children salvaged from the streets or often abandoned at the main gate, found refuge here from a harsh world. We fed and washed them, played games with them. From one year to the next we got to know the familiar faces of those orphans and abandoned waifs not fortunate enough to have been adopted by families from India and abroad.

On one memorable visit to the shelter my wife sat on the floor telling picture-book stories to two wide-eyed toddlers tucked under her arms. In another room, I lingered at the crib bed of Priti, a disabled teenager whose congenital spinal condition left her helplessly prone and silent. Priti could not speak coherently; could scarcely move her limbs. I stroked her sleek black hair and hummed songs to her, as she studied me intently with her coal-black eyes. The nuns had told me she had little chance of long-term survival, and she has since died. Her contorted face remains deeply etched into my memory.

On earlier visits to the Shelter we had never actually met with Mother Teresa. World traveler that she was, she had always been abroad when we gave our time at the Shelter.

This time we got lucky. We climbed the several flights of stairs and waited in the passage outside Mother Teresa's room, curious and excited. A young nun who was to introduce us said Mother Teresa's small room was very Spartan. Emulating the poor, the nun said, she slept on a narrow cot, and used no electric fan to cope with Kolkata's sweltering climate.

The door opened and a tiny figure, clad in her familiar white and sapphire-blue bordered sari, strode toward us on bronzed bare feet. A broad smile lit up her furrowed features, as she brought her palms together welcoming us with the traditional Bengali greeting, "Namaskar!"

Her quizzical look told me she might never have heard that Jewish birthday greeting before. I was convinced it hadn't registered when, after telling her we were from New York, she spiritedly
advised Simone, "You must go to her mission in the South Bronx… you can help out there!"

We chatted for a few minutes about the needs of the children at the Calcutta Shelter. As this scarcely 5-foot-tall dynamic woman spoke, I searched her eyes. They had an endless depth emanating a calm assurance and an artless candor. Her hazel eyes seemed to project an intense compassion.

Was I ascribing this aura out of awe inspired by her? Or was it a kind of celebrity worship?

She held up her right hand and bent each extended finger, one at a time, as she slowly recited five words: "He did this for me." Simone and I smiled at this simple prayer of gratitude. From somewhere on her person she produced two little yellow cards on which were printed a poem she had written. She offered them to us, touching our hands gently:

I still have that yellow card. But I choose to remember another poem, far more personal, said to be in her handwriting, found on the wall above her bed after she died:

Jack Goldfarb is a travel writer.