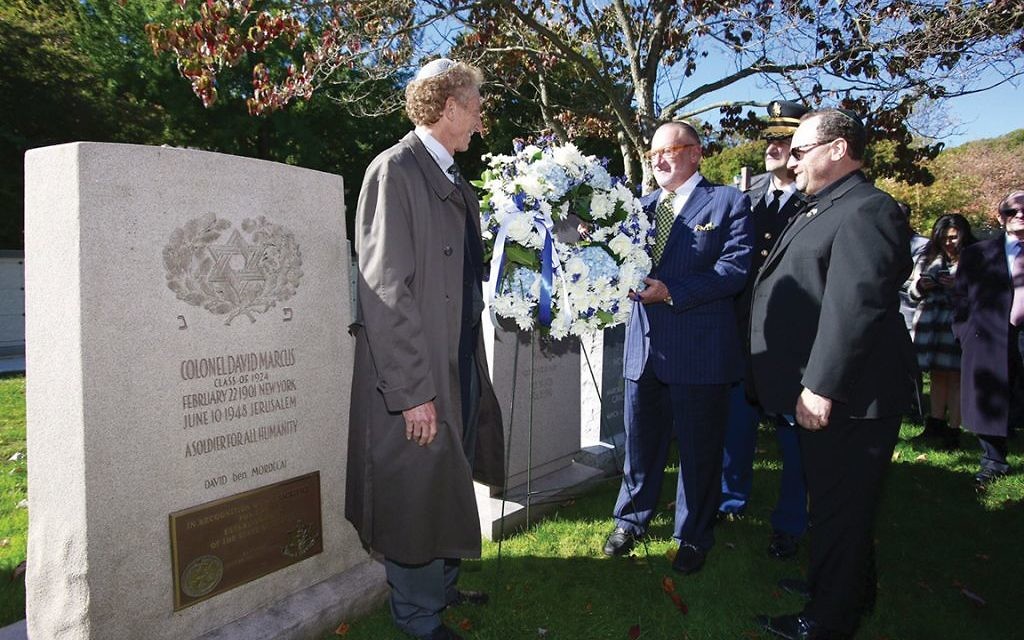 Arguably the best-known American volunteer in the Israeli army, David “Mickey” Marcus is largely forgotten now by a younger generation of American Jews, nearly seven decades after he lost his life in Israel’s defense.

But some supporters of Israel remembered him last week.

A native of Manhattan, son of immigrants from Romania, Marcus was a West Point and Brooklyn Law School graduate, a colonel in the U.S. Army who helped shape the nascent Israeli Defense Forces during the 1948 War of Independence and achieved immortality in the 1966 film, “Cast a Giant Shadow,” portrayed by Kirk Douglas.

A paratrooper on D-Day, he served in France briefly during World War II, and in the aftermath of the war, became a Zionist after taking part in a compulsory visit to the Dachau concentration camp.

After working on the U.S. legal staff of the Nuremberg trials, he returned to civilian life in the states and was recruited by the Haganah to serve as a military advisor. To avoid problems with the authorities in the British Mandate of Palestine, he disguised his name and rank, becoming Michael Stone.

As aluf, general, the first man with that rank in modern-day Israel, he assumed command of the Jerusalem front, designing a command and control structure and taking part in the planning for some crucial battles.

With little knowledge of Hebrew, he was fatally shot on the evening of June 10, 1948, outside Central Front headquarters near Jerusalem when he failed to understand a sentry’s request for that day’s Hebrew code word.

He was 47. His body was brought back to the U.S., accompanied by Moshe Dayan, for burial at West Point.

Marcus’ grave is a pilgrimage site; his is the only grave at the West Point Cemetery for an American who died fighting under the flag of another country.

In January 2015, Israeli President Reuven Rivlin paid his respects at the grave, calling Marcus “the first general of the IDF in every sense of the word.”

And last week the Israel Bonds National Leadership Conference, which was held in New York City, traveled to West Point to honor Marcus. Taking part in the ceremony were, from left above, Bonds national board members Robert Diener and Howard Goldstein, West Point Synagogue chaplain Major Henry Soussan and board member Andrew Hutter.