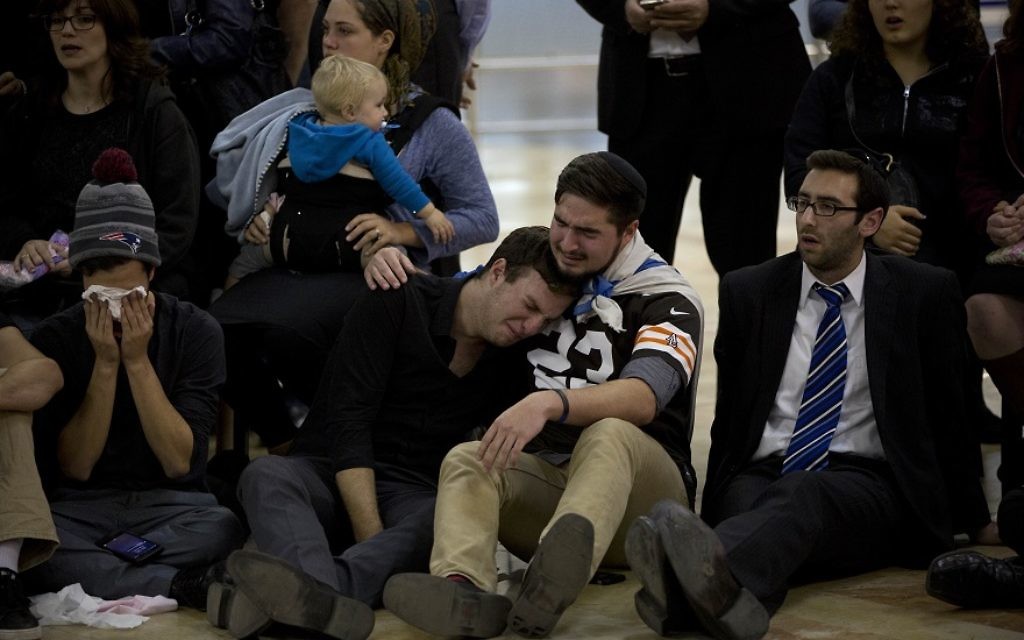 Boston — For some 2 1/2 hours, Ezra Schwartz was remembered for his unbridled joy and passion for life, his deep and ever-widening circle of friends, and his athletic prowess as a champion baseball player and adventure-seeking skier.

The sanctuary of the Boston-area synagogue was filled to capacity, with an estimated 1,000 mourners sitting and standing, according to the Stanestsky Memorial Chapels, and hundreds more stood on the synagogue grounds outside to hear about the “great life” of Schwartz, the 18-year-old American yeshiva student who was killed in a terrorist attack in the West Bank on Thursday.

More than 7,000 people from around the world also viewed the service from Temple Sinai in Sharon, Massachusetts, as it was broadcast over the Internet. After the funeral, the mourners walked to the nearby cemetery where Schwartz was buried.

The previous night, hundreds attended a memorial ceremony for Schwartz at Ben Gurion Airport in Tel Aviv before his body was repatriated to Boston.

“His life is a meaningful life. His death is a meaningful death,” began Rabbi Meir Sendor of Young Israel of Sharon, the Schwartz family’s synagogue, at the funeral on Sunday.

Schwartz died as a “kadosh,” a holy martyr, Sendor said.

A graduate of the modern Orthodox Maimonides School in Boston, Ezra was spending a gap year studying at Yeshivat Ashreinu in the central Israeli city of Beit Shemesh. He was planning to attend Rutgers University in the fall.

According to the Ashreinu faculty, Schwartz and five classmates had gone to the Etzion bloc, south of Jerusalem, to beautify a nature reserve dedicated to the three Jewish teens kidnapped and killed by terrorists last year. A terrorist, reportedly a Palestinian, opened fire on them, killing Schwartz and wounding his classmates.

Two others were killed in the attack: Yaakov Don, 51, a teacher from nearby Alon Shvut, and Shadi Arfah, a 24-year-old Palestinian from Hebron.

Speaking at the funeral, Sendor recalled Schwartz’s life, hearing “Ezra” stories from his wife, who was the boy’s kindergarten teacher.

“He had a mischievous smile. He might have done something a little out of line, a kind of bull out of a china shop, in the best way,” Sendor said. “If he smiled at you, you knew he couldn’t help himself. But it would be OK. He was full of gentleness and kindness.”

Schwartz’s physical strength was paired with his strength for caring for and protecting others, the rabbi said. At Camp Yavneh in New Hampshire, where Schwartz was a counselor, he relished his role.

“He had great patience with younger children,” who adored him, Sendor said.

Ezra was the second oldest of five children born to Ari and Ruth Schwartz, who both spoke at the service. Each of his siblings — Mollie, Hillel, Elon and Avi — also shared remembrances.

So did his grandparents, Mark and Heni Schwartz. Despite the distances, they were in regular communication — by cellphone, text messages, social media and video chats from Israel. Several of his yeshiva friends traveled from Israel for the funeral, as did the head of the yeshiva, who spoke passionately. Schwartz is also survived by his other grandparents, Alan and Laurie Senecal.

“He had a great life,” Ari Schwartz said. “We are proud of who he was. He had 18 great years. That is how we will remember him.

“Some people live long lives but have unfortunate circumstances that make life hard. Ezra had a wonderful life and he died a happy person, and that is more important than anything else.”

Ari Schwartz expressed gratitude to the Jewish community and thanked the U.S. and Israeli governments for their assistance and condolence calls.

“It made us feel Ezra was important,” he said.

Ari and his wife acknowledged their son’s many friends who have visited them since his death, sharing stories, photos and videos, including one of Schwartz reciting parts of “Harry Potter” books by heart.

“We will never forget his sense of humor and his love for sports,” his father said.

With tears streaming down his face, Ari recalled their conversations about baseball games, from championship seasons to losing games.

But it was always the social connection that was paramount for Ari, who admitted that he used to worry about how his oldest son would fare in the wider world because he had idiosyncrasies that could be annoying, he said to laughter from the audience.

“Now I know there was nothing to worry about,” he said, realizing that his friends saw these quirks as Ezra’s way of “saying I love you.”

“He transformed his passion and skill [for sports] to nurturing younger players, especially his younger brothers,” Ari Schwartz observed, recalling the nights when the family had to shine lights onto their backyard for the brothers to finish games of wiffle ball.

He brought his leadership skills to school sports, as well, according to Josh Prybyla, his baseball coach from Maimonides School.

Schwartz’s older sister, Molly, a student at the University of Maryland, recalled a recent conversation when she worried aloud about an upcoming college exam in chemistry.

“Stop worrying so much much. Do your best. You need to try to have fun,” Molly recalled him encouraging her.

At first she dismissed his casual remark, Molly said — now she appreciates his words of comfort.

Ari Schwartz encouraged family and friends to honor Ezra’s memory together “by remembering who he was and how he made our lives better and happier. We love you, Ezra. I love you.”