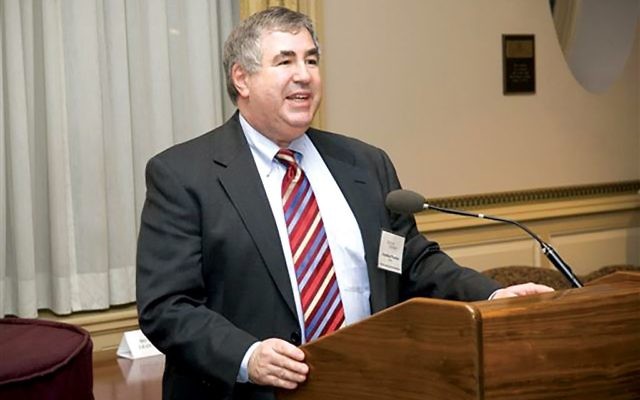 A scholar and communal leader, Jonathan Woocher was equally at home speaking before large groups and serving as a one-on-one mentor. Courtesy of Rutgers’ Bildner Center for Jewish Life

After Brandeis University history professor Jonathan Sarna published one of his books about American Jewish history a few years ago, he mentioned to Jonathan Woocher, a colleague for several years, that some of Woocher’s work was cited in a footnote.

Then Sarna mentioned that Woocher’s daughter, Meredith, a consultant for Jewish educational and communal organizations, was also cited in a footnote in the professor’s book.

Woocher started “beaming,” Sarna said. “It meant a lot to him that his daughter followed in his footsteps.”

Sarna noted that Woocher, a scholar (Ph.D. in religious studies from Temple University) and longtime Jewish communal leader (the top professional for nearly three decades at the Jewish Education Service of North America (JESNA, an umbrella organization) who died on July 7 at 70 after a four-year battle with prostate cancer, took as much pride in educating his own family as in spreading Jewish knowledge in the wider Jewish community.

He was “a visionary” who foresaw the larger role that technology would play in the Jewish education field, Sarna said, and a rare administrator equally at home dealing with both “the big picture” and small details. And comfortable giving speeches to large groups as well as mentoring people in one-on-one settings.

“Jonathan was a serious Jew,” Sarna said, who flourished as an identified Jewish student at Yale University in an era when the Ivy League institution still had quotas on Jews, capping the number it would admit, and who chanted the afternoon mincha service on Yom Kippur every year at his South Orange synagogue.

At his funeral in Livingston, N.J., on Sunday — attended by a Who’s Who of Jewish communal professionals — friends and relatives recalled Woocher as a “giant” in the field of innovative Jewish education, widely admired for his intellect, humanity, humility and sense of humor.

Several spoke of his 49-year-marriage to his wife, Sherry, and how the couple met at Camp Ramah in 1965.

“He broadened the notion of what Jewish education can be and who can be a Jewish educator,” he said. “At his core, he was an advocate for whole-life education. He had such a positive outlook on life.”

In a 2010 essay for JTA, Woocher described the changes facing American Jewry and the need for educators to move beyond a narrow focus on making Jews “more Jewish.”

“Stronger Jewish identity will certainly be an outcome of good Jewish education, but it will be embraced as learners discover that Jewish tradition and Jewish community can help them live richer, fuller, more purposeful lives,” Woocher wrote.

As head of JESNA, and later as founding president and senior fellow of the Lippman Kanfer Foundation for Living Torah, Woocher encouraged people to accept his approach to Jewish education. He was instrumental in creating the Renaissance and Renewal pillar, or department, of the former United Jewish Communities — now known as the Jewish Federations of North America (JFNA).

In a statement, JFNA remembered Woocher as a “visionary and extraordinary builder and teacher,” whose “counsel was sought out by institutions, organizations and individuals across the spectrum of Jewish communal activity.”

Woocher was a professor of Jewish communal studies at Brandeis University before coming to JESNA in 1986. The organization closed in 2013 as federations shifted their educational funding from national efforts to local ones.

Woocher earned a bachelor of arts degree at Yale University, and a master’s and doctorate in religious studies from Temple University under the tutelage of two major figures in Jewish social science, Daniel Elazar and Charles Liebman. He served on the faculty of Carleton College in Minnesota and at Brandeis, where he taught in the Benjamin S. Hornstein Program in Jewish Communal Service.

Woocher was the author of “Sacred Survival: The Civil Religion of American Jews” (1986) and numerous articles on Jewish education, community and religious life.

In addition to his wife, Sherry, and daughter Meredith, he is survived by a son, Benjamin, a grandson, Aden Sheingold, a brother, Frederic, and his father, Howard.