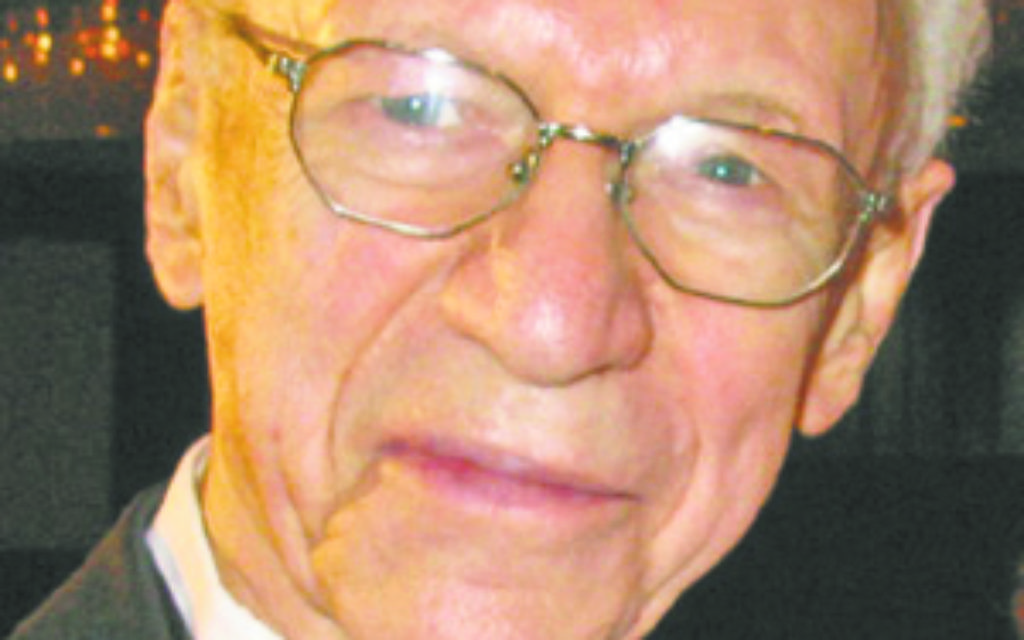 Eli Zborowski, whose life was devoted to perpetuating the memory of victims of the Holocaust through Shoah studies and financial support for Yad Vashem, Israel’s national Holocaust memorial, was laid to rest on a historic day — the 11th anniversary of 9/11. On that day, Mr. Zborowski, who died Sept. 10 in Queens of cardiac arrest at age 86, arrived at the Midtown offices of the American Society for Yad Vashem and joined the staff huddled around the television. Together they watched in horror and disbelief as the second World Trade Center tower was hit.

When it was ascertained that this was not a random accident, but a deliberate act of terrorism, his response was quickly informed by his experience in the resistance movement during the Holocaust. He stayed calm and said, “If we cower in fear now, we hand them a victory.”

Because the vast majority of people were fearful about the possibility of additional attacks, most offices and businesses in the heart of Manhattan were closed the day after the disaster. One of the few exceptions was the American Society for Yad Vashem, whose staff walked the deserted sidewalks of 42nd Street and came to work as usual.

This resolute leadership style stems from the environment in which Mr. Zborowski was nurtured.

Eli Zborowski was the first-born child of Zisel and Moshe Zborowski who lived in Zarki, Poland, not far from the German border. Moshe Zborowski was a very successful leather merchant and Zisel, a homemaker. Their comfortable one-story brick home was constantly open to those in need. Yeshiva students came daily to join the family for the noonday meat meal, and there was rarely a Shabbos or a holiday that did not include those less fortunate in the community at the family table.

As a bright handsome child who was the favorite among the extended family, Eli grew up feeling confident and self-assured. His mother taught him to speak a perfect Polish and the importance of gemilat chesed, acts of lovingkindness. His father provided him with business knowledge, negotiating skills and moral strength.

In the early fall of 1939, following a leisurely fun-filled summer, the atmosphere in Zarki was transformed into full-fledged war. Life was suddenly filled with danger, uncertainty and restrictions. Eli, only a teenager, became a member of the United Jewish Fighters Organization. His blond hair, blue eyes, a confiscated Polish army jacket and a false Polish passport allowed him to pass easily as a non-Jew. He distributed the underground newspaper about unfolding events to the small Jewish communities in southwest Poland. As he was familiar with the countryside and neighboring towns, he was later given responsibility of seeking arms and ammunition for the resistance.

Serving as a courier put him in mortal danger, and Mr. Zborowski’s family begged him to stop. He promised that he would, but he never kept his promise. During the final years of the war, Zisel, Eli and his two siblings, Marvin and Tzila were hidden from the Nazis by two Christian families. At this time, Moshe Zborowski was assigned by the Nazis to a work detail. In an attempt to escape, he was shot and was never again seen by his family.

Following the liberation in 1945, Mr. Zborowski joined a kibbutz movement in Warsaw, hoping to make aliyah. Traveling in freight cars, the journey was marked by many starts and stops. In southern Germany they were stopped by Russians at a checkpoint and kept there for several weeks. One of the freight cars carried a group of 100 teenage war orphans whose leader had suddenly disappeared. Without discussing this with anyone, Mr. Zborowski perceived that all the basic anchors of life had evaporated from these children’s lives, and he quickly stepped in to alleviate the crisis. He moved into the freight car and became the group’s leader, mentor, protector and father figure. He brought the group to the Feldafing DP Camp, organized them into a kibbutz, provided them with shelter, food and clothing. Within a year he arranged for the group to make aliyah.

Mr. Zborowski arrived in the United States in 1952 with his wife, Diana, whom he met and married in Feldafing. He began by selling camera parts door-to-door in Midtown Manhattan, and within a decade he became president of Sheaffer Pen Latin America. Diana, his loving wife for 57 years, died in 2004.

In the mid-1970s he was responsible for opening the door to resumption of diplomatic relations between Israel and Poland following the Six-Day War. Mr. Zborowski was in the forefront of Holocaust remembrance in this country. His remarkable journey led him to organize the first synagogue-based Yom HaShoah commemoration in 1964 and establish the American Federation of Jewish Fighters, Camp Inmates and Nazi Victims. He also helped establish the world’s first academic chair in Holocaust studies at Yeshiva University. In addition, he published Martyrdom and Resistance, the first newspaper devoted to Holocaust issues; founded and chaired the American & International Societies for Yad Vashem, an organization that has raised over $100 million for Yad Vashem; and established the Diana Zborowski Center for the Study of the Aftermath of the Shoah at Yad Vashem.

“Eli devoted his life to Yad Vashem and to Holocaust Remembrance, and worked with us in solidarity and close partnership to commemorate the victims and impart the legacy of the survivors,” said Avner Shalev, chairman of Yad Vashem.

He is survived by his wife, Dr. Elizabeth Mundlak Zborowski, his daughter Lilly, his son Murry, nine grandchildren, his brother Marvin and his sister Tzila.

To ensure the memory of the Holocaust in the future, Mr. Zborowski spearheaded the Young Leadership Associates of the American Society for Yad Vashem, a group that will shepherd the cause of remembrance from generation to generation.

Rochel U. Berman is the author, most recently, of “A Life of Leadership: Eli Zborowski from the Underground to Industry to Holocaust Remembrance” (KTAV, 2011), which she co-wrote with her husband, George Berman.