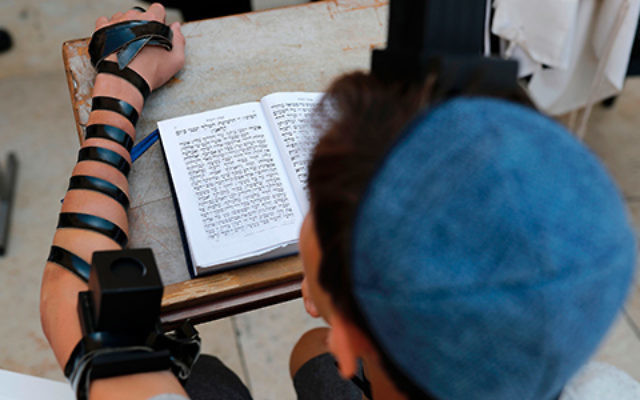 Growing up in the 21st century, American Jewish teenagers are faced with the question of how to honor traditional rituals while modernizing other practices. Identifying with the world’s oldest monotheistic religion makes this process a bit challenging, especially for teens living in 2017.

Interestingly, or discouragingly, depending on perspective, most American Jewish teens today describe Judaism using terminology of an ethnic or cultural group, but not a religion. The 2016 report by The Jewish Education Project, “Generation Now: Understanding and Engaging Jewish Teens Today,” explains that the vast majority of non-Orthodox, American Jewish teens today consider religious practices as open to interpretation and adjustment.

Since there are few associations to rituals we see in our everyday lives, most Jewish teens seek ways to make religious practices more personally meaningful. To many teens, this can simply mean focusing their customs around food, family, music, spirituality and other activities that reflect what Judaism means to them. Some also question the status quo of ritual behaviors.

A central idea behind the revisions and modernizations of religious practices is the broadening of whom is considered, or “counts” as, a Jew.  For example, who “counts” in a minyan of 10 adults — is it only men or can women also be “counted”?  What about transgender men and women or young adults of with a Jewish father and non-Jewish mother?  This is a very real issue happening in modern society today as seen, for example, at the Kotel in Jerusalem. For many of my peers, it is hard to understand why women, who seek to pray with the same proximity to the Kotel with the same rituals as men, are not included at the holiest site for Jews. Despite the allure of secularism and modernity, there remain compelling religious practices that many non-Orthodox, American Jewish teenagers find attractive.  Some teens attend Jewish camp during summer, where there is the special observance of Shabbat with communal prayers, kosher food, and a profound emphasis on rest in order to distinguish the holy day from all other days of the week.  For many, this is the first experience with being “shomer Shabbat” (Shabbat observant), which bonds young adults with traditional rituals and practices.  My memories of the sanctity of Shabbat while at Camp Ramah Berkshires and then Ramah Rockies influenced my decision to follow the rules of “shomer Shabbat” during my bar mitzvah weekend; I think back to that unique Shabbat with my family as an important experience.  Furthermore, most Jewish teenagers respect the struggle and sacrifice of keeping religious traditions intact, especially when competing with a secular forum.  A prime example of this balance is exemplified in the story of Sandy Koufax, a Baseball Hall of Famer who decided not to pitch during game one of the 1965 World Series because it fell on Yom Kippur, a personal choice that has emboldened generations of Jewish youth to respond similarly and embrace Jewish values.