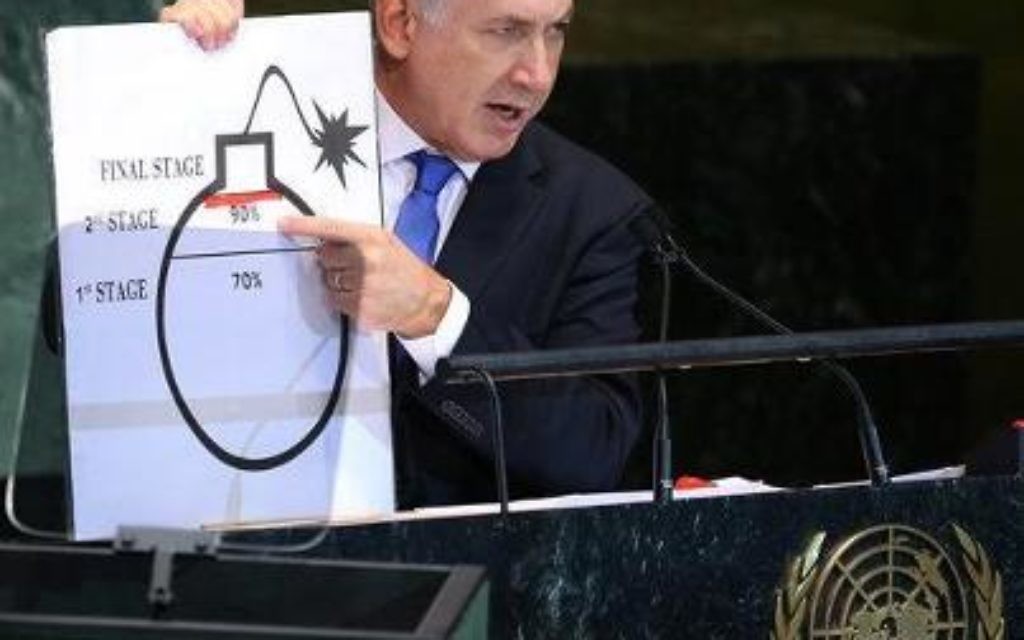 By using a Wile E. Coyote-style stick drawing of a bomb and a red marker in his United Nations speech, Israeli Prime Minister Benjamin Netanyahu for the first time clarified the difference between Israel’s red line and President Barack Obama’s when it comes to stopping Iran’s quest for a nuclear bomb.

It’s the difference between enriching uranium to weapons-grade purity — Netanyahu’s red line — vs. the U.S. position that it will wait to see if Iran develops a trigger mechanism to create such a bomb.

But in an election year, such differences “reverberate like in a sound chamber and sound worse than they really are,” according to Dore Gold, a former Israeli United Nations ambassador.

“In 2009,” he pointed out, “Obama talked of engaging with Iran. The two [Obama and Netanyahu] have now converged and strategically are in the same place. His [Obama’s] statement that he is not going to contain Iran is a huge shift.”

In a conference call organized by the Jewish Federations of North America and the Jewish Council for Public Affairs, Gold said he believes the differences between Netanyahu and Obama “are not anywhere near” those of the late Israeli Prime Minister Yitzchak Shamir and former President George H.W. Bush. But, he said. “when it came to the invasion of Kuwait, they worked together.”

Gold said he believes Netanyahu and Obama “will surmount” their differences, although he noted that “tactically” the United States can wait longer to attack Iran because of its more powerful weapons.

“The U.S. can wait until five minutes before midnight and Israel only until 11:30,” he said. “That is not insurmountable or as catastrophic as is often characterized.”

In his speech to the world body, Netanyahu used his drawing to illustrate the three stages of uranium enrichment Iran is following. The first stage was to 3.5 percent of purity. It is now in the second stage, which enriches the uranium to 20 percent of purity. As soon as Iran stockpiles about 570 pounds of uranium at that level, it is able to move to the third and final stage that enriches it to 93 percent. After only a few weeks or a couple of months, it will have about 60 pounds of uranium enriched to 93 percent – enough to build one nuclear warhead.

Netanyahu argued that Israel cannot wait for the final stage and said Iran could develop the trigger mechanism in an isolated warehouse that would go undetected by intelligence agencies.

Given the clear differences between Netanyahu and Obama, Michael Desch, a professor and chair of the Department of political science at the University of Notre Dame, is not so optimistic the two will be able to resolve their differences.

“No doubt that Netanyahu is right that Iran has the capability to enrich to 90 percent, but just having that ability does not mean it is going to do it,” Desch said. “The position of the Obama administration is that we look at other things, such as building the trigger and doing certain other tests that would indicate engineering a weaponized nuclear device.”

U.S. Defense Secretary Leon Panetta said earlier this month that for the U.S. the red line is “when they make the decision to go ahead and build a nuclear weapon.” He contended that U.S. intelligence would learn of that decision and that the U.S. would then have about a year to launch a military attack.

But Netanyahu made clear that Israel must act in no more than six or seven months.

Desch said Netanyahu fears that weaponizing the device could be done so surreptitiously that it might be missed. The Obama administration is confident it will be caught.

“So at the end of the day, they have not solved the gap on where the red line should be,” he said.

In the meantime, Desch said Netanyahu made clear that he is looking to the West to increase economic sanctions on Iran, to set a red line and to “threaten the use of military force” if Iran doesn’t stop its work on a nuclear bomb.

Natan Sachs, a fellow at the Saban Center for Middle East Policy at the Brookings Institution in Washington, pointed out that whether the U.S. or Israel launches a military strike on Iran, the most it would do is set back Iran’s nuclear weapons program.

“Many fear that an Israeli strike would be limited and would hasten the building of an Iranian nuclear bomb,” he said. “American military capacity would cause severe damage, but it would not end the possibility of a nuclear program, which would depend on diplomacy or regime change.”

Sachs said he believed that setting a red line and a “credible threat” of military action is “the best way to resolve the issue peacefully. And the more likely they believe the threat of force is credible, the more it might cause some change.”

He noted that Netanyahu commended Obama for leading the West in imposing economic sanctions against Iran. But Sachs said there is much skepticism in Israel that the sanctions and diplomacy will be successful.

“It’s worth remembering that the same Iranian regime withstood sanctions in the past,” he said. “So there are mixed views on their effectiveness.”

Although Netanyahu devoted most of his address to Iran, he mentioned the Palestinians in his opening remarks. And he took a swipe at Palestinian President Mahmoud Abbas, who had addressed the UN General Assembly about a half-hour earlier, calling his comments “libelous.”

He also dismissed what he called “unilateral declarations of statehood,” and said the Palestinians and Israel must “sit together” to work out the details of a “demilitarized Palestinian state that recognizes the one and only one Jewish state.”

Abbas had announced his intention to ask the General Assembly to recognize the Palestinians as a “non-member state.” But he stressed that this would not present a threat to Israel.

“We are not seeking to delegitimize Israel, but rather establish a state that should be established: Palestine,” Abbas said.

He also cited a spate of attacks on Palestinians by West Bank settlers — he put the number at 535 in the last year — and said 510 Palestinian buildings had been destroyed, leaving 770 Palestinians homeless.

Should Israel continue the same policies in the West Bank, Abbas warned, there could be trouble ahead.

Peter Joseph, president of the Israel Policy Forum, said he had met with Abbas on Monday with about 10 other Jewish leaders and had heard a very different Abbas.

“This was a vocabulary we didn’t hear at all,” he said. “We didn’t hear any of this. We told him he needs to project a different public imagine, and it seems like he just ignored us.”

He pointed out that Abbas “made it very clear that he can not sit at a [negotiating] table while there is still construction going on [in the West Bank], and Netanyahu has said Israel had a settlement freeze for nine or 10 months and the Palestinians found every excuse not to talk.”

Asked what Abbas said when reminded of the Israeli settlement freeze, Joseph said: “I didn’t get an answer.”