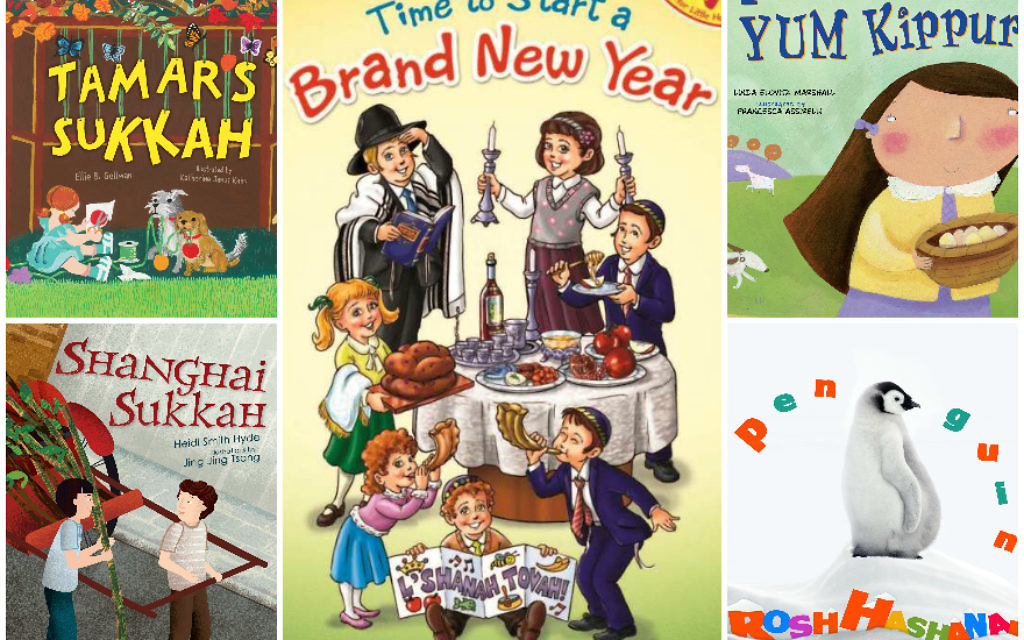 From Antarctica to Shanghai and farms to cities, this year’s crop of High Holidays books for children offers a globe-trotting exploration. Friendship and family are the themes that run through five new titles that entertain and inform young ones and older readers. Turning the pages of a new book is the perfect way to usher in the holidays.

Celebrating Rosh Hashanah can be tough for a young penguin in Antarctica. There are no bees to make honey and no apple trees — just a lot of snow. In this warmhearted, offbeat introduction to the Jewish New Year, illustrated with photographs of penguins and their natural habitat, the little penguin sometimes finds it hard to do the right thing. In simple rhythmic verse, part of an animal-themed series on Jewish holidays (“Otter Passover” and “Panda Purim”), the Israeli-based writer Jennifer Tzivia MacLeod conveys the themes of Rosh Hashanah – reflection, forgiveness, faith and family. Bonus: There’s a penguin origami craft project at the end.

With this new title, Hachai publishing adds to its collection of rhyming, colorful stories for young kids. This High Holidays story by Rochel Groner Vorst features a contemporary haredi Orthodox family getting ready to celebrate Rosh Hashanah, from apple picking to harvesting honey to hearing the shofar. The author, who as a teen won Pittsburgh’s Holocaust poetry contest, is a kindergarten teacher at a Jewish day school in Charlotte, North Carolina, where she grew up.

The endearing Talia makes a return in “Talia and the Very Yum Kippur,” Linda Elovitz’s funny and charming encore to “Talia and the Rude Vegetables” (2012), featuring a young girl who sometimes confuses grown-up words that sound like others.

It’s Yom Kippur and Talia is visiting her grandparents, who live on a farm. She helps her grandmother prepare a noodle kugel for the family’s break fast, gathering eggs from the hen house and milking the cow with her grandfather. Kids will be tickled by the bit of merry mayhem that follows when Talia mistakes the Hebrew word “yom” (meaning “day”) for “yum” — and she begins to grow impatient for her family’s “breakfast” as she wonders why a “fast day” is moving so slowly.

Grandma comes to the rescue by explaining that on Yom Kippur, people pray, fast and ask for forgiveness for any wrongdoings, leading to a heartfelt set of apologies between Talia and Grandma. A truly yummy break fast with her family ends the tale — and there’s a kugel recipe at the back of the book.

Bursting with the colors of fall, “Tamar’s Sukkah” is an upbeat story that emphasizes simple living, gratitude, and welcoming friends and strangers. Tamar, the spunky heroine of the tale, is on a mission to make her plain family sukkah just right — older kids in the neighborhood are invited, one by one, to lend a hand.

The award-winning artist Katherine Janus Kahn, whose books include the hugely popular Sammy Spider series, brings the action to life with bright illustrations that depict a pleasant, suburban multiracial neighborhood filled with squirrels, puppies and bunnies. In the final double-page spread, the kids gather to admire their handiwork and share a simple snack. “A sukkah full of friends is just right,” Tamar exclaims.

This Sukkot story imagines the experiences of a family that fled Nazi Germany to Shanghai in the early 1930s. Despite their overcrowded neighborhood, young Marcus is eager to build a sukkah in his new country. Marcus and his Jewish pals, helped by their new friend Liang, build a simple rooftop sukkah using ingenuity and bamboo. But without fresh fruit available to decorate the sukkah, Marcus is disappointed that it is too plain. To cheer him up, Liang invites Marcus to the Chinese Moon Festival, China’s traditional autumn harvest festival. A puzzling riddle that Marcus finds inside a glowing paper lantern leads to an unexpected act of kindness by his new friend. Even better than adding beauty to the sparely decorated sukkah, Marcus discovers a deeper meaning to the holiday.

Illustrations by the noted Hawaiian artist Jing Jing Tsong vividly portray daily Jewish life in Shanghai in shades of browns and grays — in contrast to the reds, gold and orange that pop on two double-page spreads depicting the holidays, both Jewish and Chinese. An author’s note explains the heroism of Japanese diplomat Chiune Sugihara, who helped thousands of Jews escape Nazi Germany by obtaining visas to travel through Japan and eventually settle in Shanghai.