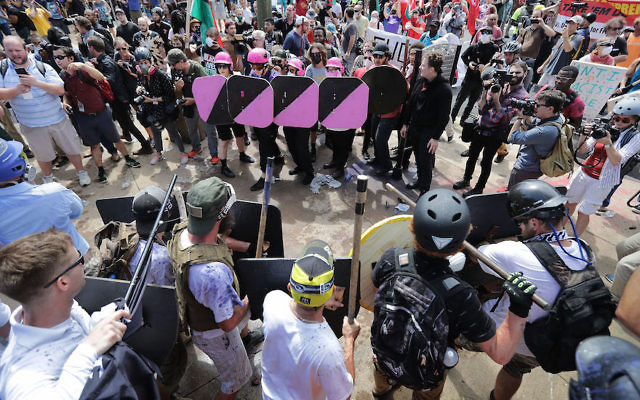 The World Jewish Congress said the racist rhetoric and violence that occurred during the largest gathering of far-right groups in years last weekend in Charlottesville, Va., has “no place, whatsoever, in our society.”

Rabbi Rick Jacobs, president of the Union for Reform Judaism, said in statement issued on Saturday evening, “The vile presence and rhetoric of the neo-Nazis who marched this weekend in Charlottesville is a reminder of the ever-present need for people of good will to stand strong, to speak loudly against hate, and act both to delegitimize those who spread such messages and to mitigate the harm done to the commonweal of our nation and to those that are the targets of hate messages.” He added, “once again, hate has killed.”

Morton Klein, president of the Zionist Organization of America, said his organization was “sickened, revolted by, and strongly condemns [the] blatant act of murderous terrorism and the hatred” on display at the protest.

“Once again, hate has killed.”

The Conference of Presidents of Major American Jewish Organizations added its “strong condemnation to those leaders in government, religious bodies, the media, civil society and the business community who have clearly and forcefully denounced the white supremacists and neo-Nazi messages of hate which incited murderous violence in Charlottesville, resulting in the death of Heather Heyer and injuries to many others.”

These groups were just some of the many Jewish organizations that sharply condemned the rhetoric and violence that jolted the nation last weekend.

Rabbi Elazar Muskin, president of the Rabbinical Council of America, the leading organization of Orthodox rabbis in North America, said the group was “appalled by wanton displays of violence and hatred that erupted in Charlottesville on Saturday. We pray for the injured and express our condolences to the families of those who were killed. We join our voices with all those who embrace the best of our country’s values of respect, tolerance and decency.”

The Holocaust Memorial and Tolerance Center of Nassau County issued a statement condemning “white supremacists, racists and anti-Semites whose hateful speech and actions led to the tragic violence in Charlottesville on Aug. 12. The display of Nazi symbolism and the racist hate speech are frighteningly redolent of pre-war Germany. As we recoil from the shock and horror that something like this could happen in 21st-century America, it is critical that action be taken to overcome hate and fear, and to heal the divisions in our country.”

And the American Jewish Committee’s CEO David Harris said what occurred last weekend was “nothing short of horrifying.”

“It was sickening to see people drawn together by the siren songs of white supremacy, the Ku Klux Klan and neo-Nazism,” he said.