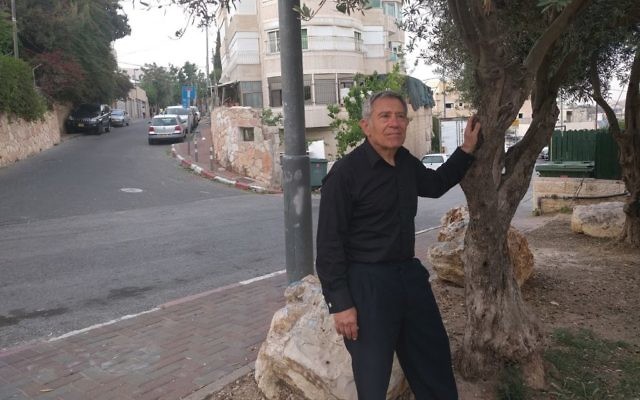 David Maeir-Epstein on Asael Street. “There was a virtual wall in our neighborhood.” Photos by Joshua Mitnick/JW

Jerusalem — Running through the heart of Jerusalem’s Abu Tor neighborhood, Asael Street used to be divided by barbed wire that marked the no-man’s-land between Israeli west Jerusalem and Jordanian east Jerusalem in the decades before 1967.

Today, the casual visitor to the neighborhood would be hard-pressed to find any remnants of the barrier. Israelis, expatriate foreigners and Palestinians residents walk the road freely and exchange pleasantries in Arabic and Hebrew.

There are — however — other clues of the enduring divide in an area Israel captured a half-century ago during the Six-Day War: On the western Israeli side of the street, address signs on newly renovated buildings are in Hebrew; and on the eastern Palestinian side, the houses are adorned by colorful stenciled images of the Dome of the Rock alongside Arabic-language graffiti.

Indeed, even though Abu Tor’s Israeli and Palestinian halves have long since been unified governmentally, for decades the neighborhood’s two populations have lived separately. Relations across the old dividing line have been few and far between.

Decades of political tension and occasional waves of Palestinian uprisings against Israel have left Jewish residents anxious about venturing down the slope where the Palestinian section of the neighborhood begins. Many Palestinians have kept away from Jewish neighborhoods.

In the last two years, however, a group of Palestinian and Israeli residents of Abu Tor have reached across that divide to get to know one another and improve life in the neighborhood. Dubbed “Good Neighbors,” the rare Jerusalem partnership is still in its infancy but has yielded a series of joint projects; there are Arabic- and Hebrew-language courses, several Arab-Jewish social gatherings and a children’s soccer team that draws players from both sides of the neighborhood.

“There was a virtual wall in our neighborhood,” said David Maeir-Epstein, a resident of Asael Street who has spearheaded the cooperation initiative with his wife Alisa. “People would have second and third thoughts before going to the other side.”

The cooperation effort, he said, is bearing fruit because it steers away from political dialogue and airing competing narratives between Palestinians and Israelis in regard to the long-running conflict. Instead, the residents have focused on areas of common interest: garbage pails, speed bumps, green spaces, community centers and resisting a luxury building project slated for the neighborhood.

The project is about “my hope, my environment, my concerns and my neighborhood,” said Maeir-Epstein, a community organizer originally from Bethlehem, Pa. He noted that the next dimension of the joint project involves a plan to boost Abu Tor’s retail and service providers by encouraging residents to patronize local businesses.

The seeds of the partnership were planted in 2014 and 2015, when Jerusalem was awash in violence and riots surrounding tensions over the Temple Mount in the Old City. There were stabbings, car ramming attacks and daily vandalism by Palestinians against the city’s light rail line. Large detachments of riot police were deployed as young Palestinian kids set dumpsters aflame and threw rocks at police. Several residents of the neighborhood found their cars torched.

For the first time, the police set up a series of roadblocks along the seam line between east and west in Jerusalem. Abu Tor was not spared: streets in the Palestinian half were littered with rocks and burned- out dumpsters, while residents were blocked from driving their cars into the Israeli half of the city.

Despite the tension and reservations, residents in and around Asael Street were able organize a series of evening meetings over coffee. This was no small feat, said people involved in the project.

“We are one neighborhood, but there are people who were afraid at the beginning,” said Khaled Rishek, who also facilitates a Jewish-Arab youth leadership group at the Jerusalem YMCA. “A lot of people on our side and the Jewish side were opposed to getting to know each other. The hardest thing is the first step, but we’ve succeeded in getting past it.”

Haj Ghaleb Abu Nimjeh, the head of the neighborhood in the Palestinian half of Abu Tor and a resident of Asael Street, remembers playing soccer as a child along barbed wire and asking Jewish kids to return balls that had been kicked over the border fence. In the decades after the 1967 war, relations in the neighborhood have experienced several ups and downs.

He said that when the Good Neighbors project first got off the ground, there was pressure from Palestinian politicians from outside of Abu Tor to pull back. “I told them this isn’t about politics,” Abu Nimjeh said. “We are doing something for the neighborhood.”

Since the advent of the project, the situation in the neighborhood has improved, he said.

“We realize that we need to be good neighbors to help each other. If we are separate, and don’t help each other, we won’t achieve anything,” he said.

For years, the Jewish half of the neighborhood, with its leafy streets and old stone buildings and location on the seam of Jerusalem, has drawn foreign journalists and diplomats — a trend that has helped spur a wave of renovation. In the Palestinian area of the neighborhood, however, residents face numerous demolition orders for buildings that the municipality says are unauthorized.

Despite that disparity, the Jewish and Arab residents of Abu Tor are also trying to team up to oppose a plan to build a trio of luxury seven-story buildings on the historic neighborhood bluff — considered a holy site by many — looking out to the Old City. Residents are also concerned that the new development project will bring with it traffic and parking problems for residents of Asael Street.

“We all fear that land might be expropriated to widen the road at the expense of the Arab side,” wrote Sue Serkes, a neighborhood resident and activist, in an email. “This kind of working together in Jerusalem is unheard of — especially at this time.”

Shimon Dolan, a 69-year-old lawyer who helped pay for the team’s uniforms, said the young players communicate in a mix of Arabic, Hebrew and English. Though they barely speak each other’s languages, the game helps bridge the gaps. “There is a lot of motivation. There is anticipation for the games and the practices. They like coming,” Dolan said.

However, it is difficult to deepen the kids’ familiarity with one another beyond soccer, he concedes. That requires additional time from parents and kids.

“I would like to see more connection between Jews and Arabs beyond the game, but that’s hard,” he said.

Maeir-Epstein said that he believes the framework of Arab-Jewish community cooperation in Abu Tor can be replicated in other areas straddling the border in Jerusalem.

“I’m not saying this is going to bring peace in the Middle East,” he said. “But if it builds up a sense of trust and pride that ‘we did it together,’ that can create a community that can look beyond our religious and political differences.”

“This is apolitical, but if it succeeds and builds a model, it makes an important political statement that strengthens the center. In Israel, the extremists on both sides want to say, ‘You can’t live together,’” he continued. “If we can make this a community that lives together, and has a common vision, we are saying that we want to take back the center.”