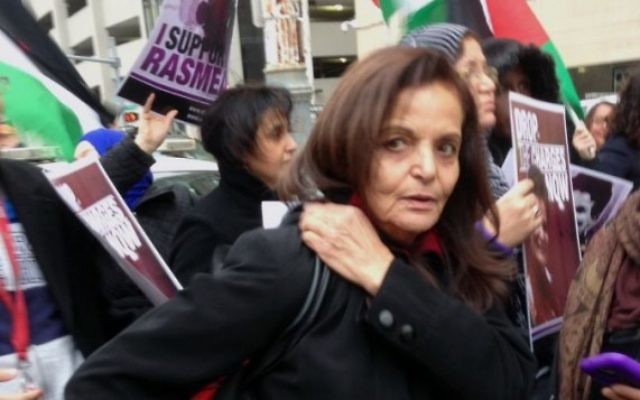 Rasmea Yousef Odeh, a Palestinian who lied about her involvement in terrorist attacks, will be deported today from the United States, where she has lived for 22 years.

A Palestinian who lied about her involvement in terrorist attacks was ordered to be deported for illegally obtaining her citizenship from the United States, where she has lived for 22 years.

On Thursday, a U.S. federal court in Detroit ordered Rasmea Odeh’s deportation, citing her admission to lying on her citizenship application, the news site Click on Detroit reported.

Odeh, a 70-year-old Chicago-area resident, was convicted overseas for participating in two terrorist bombings that killed two Israelis and being a member of a group designated by the United States as a terrorist organization, the Popular Front for the Liberation of Palestine.

“In 1969, the Popular Front for the Liberation of Palestine conducted two bombings in Jerusalem, Israel,” acting U.S. Attorney Daniel Lemisch said. “One was at a Supersol supermarket, in which two individuals were killed and many more wounded. The second bombing was at the British Consulate. Defendant Odeh was arrested and charged with participation in the bombings.”

Lemisch said that in interviews, other participants named Odeh as the person who chose the supermarket as a target, scouted the area and placed the bomb.

She was sentenced to life in prison in Israel, but was released in 1979 as part of a prisoner exchange.

Odeh will be deported to her home country of Jordan and be barred for life from re-entering the U.S.

U.S. District Court Judge Gershwin Drain also fined Odeh for $1,000 to show her that there are consequences for lying on immigration paperwork.

Odeh obtained her U.S. immigrant visa in 1994 and her citizenship in 2004. In both applications, she failed to disclose her arrest and convictions in the bombings. She pleaded guilty to falsifying her immigration applications.

According to a plea agreement Odeh signed, she admitted that she lied about her criminal history.

In court, she told Drain, “Dreams were turned into a nightmare and Zionists killed women and children without consideration … and turned us into strangers in our own country.” She also said, “The Israeli occupation of Palestine is a crime.”

The judge interrupted her three times to tell her that the case is about false statements only. He threatened her that she was risking a conviction for contempt of the court.

When Odeh said her and her people are not terrorists, Drain told her, “This is not a political forum to fan the flames of the Palestinian and Israeli disputes.”

Drain sentenced her to time served and suspended her bond.