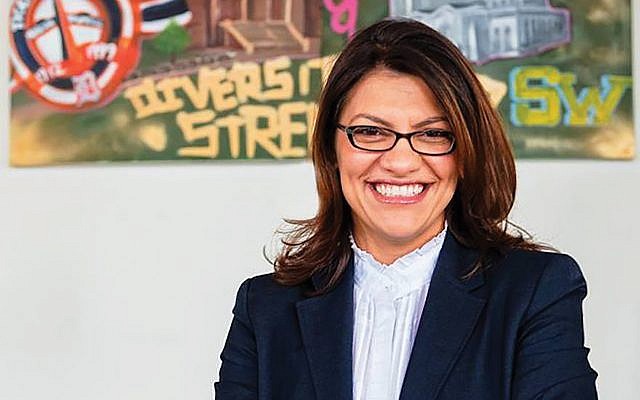 (JTA) — Rep. Rashida Tlaib said in an interview that she “loves the fact” that her “Palestinian ancestors” were part an attempt “to create a safe haven for Jews” after the Holocaust.

The freshman Michigan Democrat made the comments in an interview Saturday on the Skullduggery podcast titled “From Rashida With Love.”

“There’s always kind of a calming feeling when I think of the tragedy of the Holocaust, that it was my ancestors — Palestinians — who lost their land and some lost their lives, their livelihood, their human dignity, their existence, in many ways, has been wiped out … in the name of trying to create a safe haven for Jews, post-Holocaust, post-tragedy and the horrific persecution of Jews across the world at that time,” Tlaib said. “And I love the fact that it was my ancestors that provided that in many ways.”

In prestate Palestine, Muhammad Amin al-Husayni, the grand mufti of Jerusalem, opposed all immigration of Jews into Palestine, and during World War II campaigned against the transfer of Jewish refugees to Palestine. He also reportedly worked with the Nazis to prevent the establishment of a Jewish homeland.

In addition, the Palestinian-Arab residents revolted against the British, which led to restrictions on Jewish immigration to British Mandate Palestine, depriving Jews of a “safe haven.”

Tlaib also condemned Israeli Prime Minister Benjamin Netanyahu for not seeing her grandmother, who lives in the West Bank, as an equal.

“We can smell it from far away that, no, you don’t want to look at my grandmother in the eye, Netanyahu, and say ‘You are equal to me. You are as human as I am to you,’” she said.

At least two of Tlaib’s Republican colleagues took her remarks out of context, saying she had said that the Holocaust — and not the refuge that Jews found in Palestine — gave her a “calming feeling.”

“Rashida Tlaib says thinking of the Holocaust provides her a ‘calming feeling,’” Wyoming Rep. Liz Cheney, the third-ranking Republican in the U.S. House of Representatives, said on Twitter.

Surely now @SpeakerPelosi⁩ & ⁦@LeaderHoyer⁩ will finally take action against vile anti-Semitism in their ranks. This must cross the line, even for them. Rashida Tlaib says thinking of the Holocaust provides her a “calming feeling” https://t.co/opUUNEol2d

.@RashidaTlaib says the Holocaust gives her “a calming feeling” calling for a 1 state solution putting Jews in the minority & out of power of their own country. This is a heart filled w darkness & how the Holocaust began in 1st place. Listen @ 28 min mark. https://t.co/7ZEYSnxV4b

Tlaib in a statement slammed Cheney “for using the tragedy of the Holocaust in a transparent attempt to score political points.” The statement said Tlaib “did not in any way praise the Holocaust, nor did she say the Holocaust itself brought a calming feeling to her.”

“Democrat Rep. Tlaib is being slammed for her horrible and highly insensitive statement on the Holocaust,” Trump said. “She obviously has tremendous hatred of Israel and the Jewish people. Can you imagine what would happen if I ever said what she said, and says?”

Democrat Rep. Tlaib is being slammed for her horrible and highly insensitive statement on the Holocaust. She obviously has tremendous hatred of Israel and the Jewish people. Can you imagine what would happen if I ever said what she said, and says?

Last week Tlaib, the first Palestinian American to be elected to Congress, announced the dates for her congressional visit to the West Bank, which she organized to compete with Israel trips organized by the American Israel Education Foundation, an affiliate of the American Israel Public Affairs Committee.