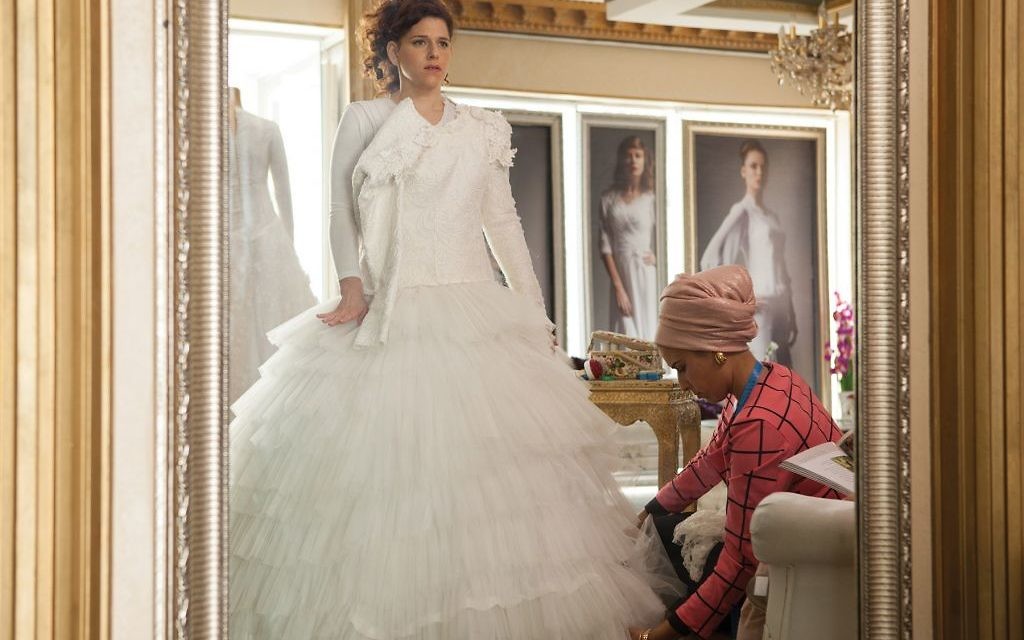 Noa Kooler in a scene from “The Wedding Plan.” About the process of making her second film. Courtesy of Lea Golda Holterman

If you go by the evidence of her masterful first film, “Fill the Void,” you would expect writer-director Rama Burshtein to be an austere and deadly serious woman. But her new film, “The Wedding Plan,” which opens Friday, May 12, suggests a very different person. Much like her second feature film, Burshtein turns out to be quietly charming, soft-spoken with an easy smile and the relaxed manner of someone who is finding the interview circuit a breezy walk in the park.

If you take her at her word, that person and that film are a more accurate reflection of Burshtein than the more rigorous, intense “Void”; the first film centers on the excruciating decision of a young chasidic woman who is confronted, both by the strictures of Jewish law and the demands of her budding affection for a young man, with marrying her older sister’s husband after her sister has died in childbirth. One might say Burshtein wears her chasidism as lightly as her colorful dress and hat.

One of the principal differences between the two films is that the first work is peopled with non-actors going before the camera for the first time. Hadas Yaron, the film’s incandescent lead actress, was someone Burshtein “found in the Army.”

In a certain sense, “Fill the Void” was a reflection of Burshtein’s previous filmmaking. Although she is a graduate of the highly regarded Sam Spiegel film school in Jerusalem, she broke into writing and directing as part of the small but insistent circle of ultra-Orthodox women who make films for their own community. As a training ground, she admits, it was a mixed blessing.

“It’s totally different from the mainstream film world,” she says. “It’s an industry nobody supports, funded entirely with private money, often from the filmmakers themselves. So it’s very formulaic and very commercial. Everything has to appeal to everyone or you lose a lot of money.” The star of Burshtein’s “Fill the Void,” Hadas Yaron, never acted before. The director says the lead role in her new film, played by Noa Koler, above, “was too complicated a part” for a novice. Courtesy Roadside Attractions

And there is another problem for these fledgling women filmmakers.

Burshtein says, “They don’t watch any other films, so they haven’t learned cinema. Everything is rather primitive. But I learned a lot there; I learned about putting two people in the frame and the effects of size and color and framing.”

She also seems to have learned how to work with performers, first non-actors like Yaron, and then seasoned pros like Noa Kooler, the actress at the center of “The Wedding Plan,” an experienced stage actress who has appeared in supporting roles in “Urban Tale” and “Youth.” 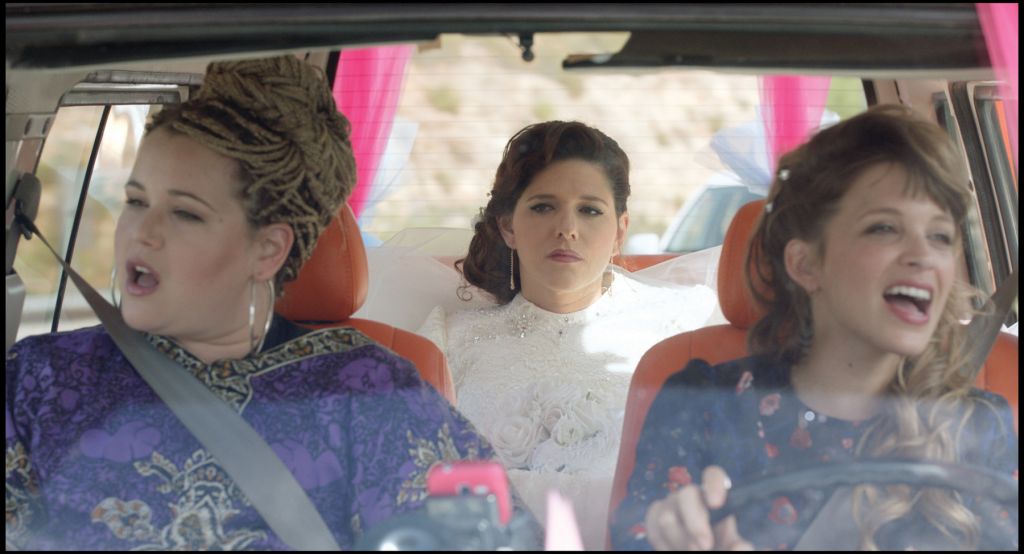 Ronny Merhavi, Noa Koler and Dafi Alferon in a scene from Rama Burshtein’s “The Wedding Plan.”
Courtesy of Roadside Attractions

In contrast to “Fill the Void,” the new film needed an experienced actress in the lead role, Burshtein says.

“It couldn’t be a non-actress,” she explains, “It’s too complicated a part. Noa is a theater actress, she’s a genius, she shines. I watched her audition and saw the essence of the character.”

Burshtein must have seen correctly. Kooler won the best actress Ophir (the Israeli version of the Oscar) for her performance.

“The Wedding Plan” is being billed as a romantic comedy but, like the best of that genre, it has an underlying seriousness, even melancholy. Michal (Kooler) is 32 and Orthodox, so she is particularly conscious of the ticking of the proverbial biological clock. When her fiancé abruptly decides to cancel their scheduled wedding,” telling her, “I just don’t love you,’ she decides that she will proceed without him. She hires a hall, plans a menu and invitations. Now all she needs, with 22 days left before her chosen date, is a bridegroom. It would be easy to play this setup for farce but Burshtein is aiming for something considerably more nuanced. 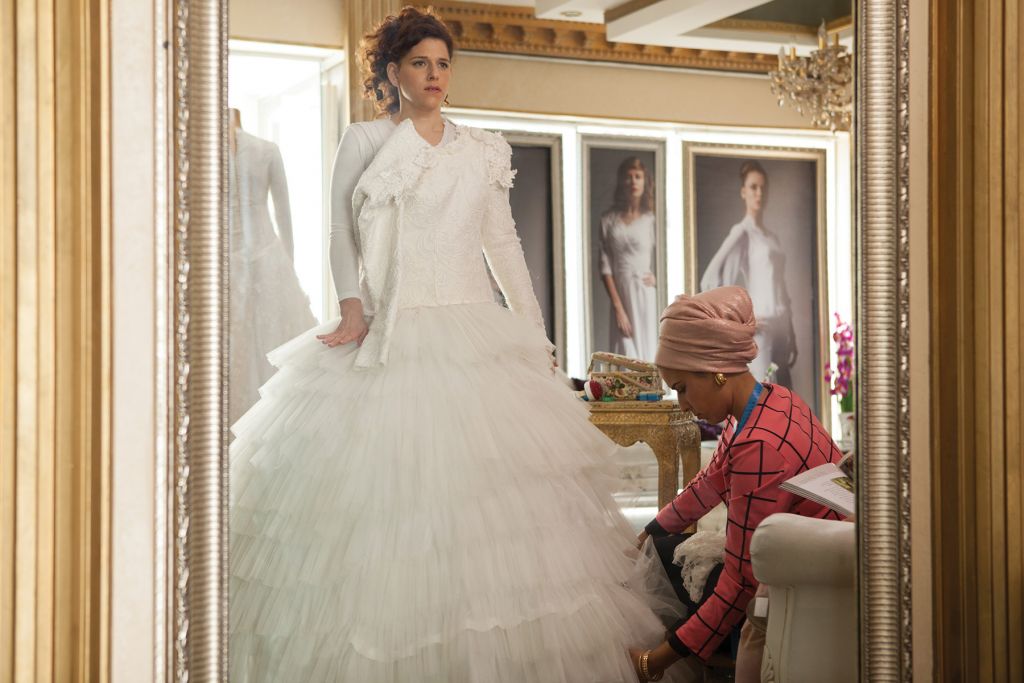 Noa Kooler in a scene from “The Wedding Plan.” About the process of making her second film. Courtesy of Lea Golda Holterman

In a sense, “The Wedding Plan” is a variation on “Fill the Void,” with another willful young woman playing off the expectations of her community to get the happily-ever-after she wants. At first, the comic potential of the material seems to deny it the intensity of the more obviously fraught earlier film, but Burshtein has no interest in making a conventional comedy. The new film, like its predecessor, is a subtle meditation on the place of single women in a religious community that places great store in its traditions of marriage.

For Burshtein, the film is really about hope.

“I think we lack hope,” she says quietly. “For me as a Breslov chasid, life is about the movement between hope and despair,” an echo of the words of Rebbe Nachman of Breslov, who founded the group at the turn of the 19th century.

Indeed, the film’s Hebrew title, “Through the Wall,” is another echo of the Rebbe, a suggestion that one must break down the barrier between hope and despair.

“I wanted to make a film about that,” Burshtein says. “You need to be a believer to do that, to go through that wall.”

On a more practical note, you need to have a terrific belief in self to get a second feature film made, as Burshtein laughingly admits.

“The second project is always harder,” she says. “Suddenly there’s a club saying, ‘You’re so special.’ And you want them to still love you.”

She uses shorthand to describe the temptation to appease those fans.

“It’s the ‘red carpet,’” she says. “It is a code for honors and success. That’s a dangerous drug because you become addicted to it the first moment you taste it.”

Her antidote is simple.

The first time she thought that the acclaim for “Fill the Void” might be damaging her creative process, she says, “I went to my studio and put on some music. For about 20 minutes I imagined the red carpets. Then I started writing [the script for ‘The Wedding Plan’].” n