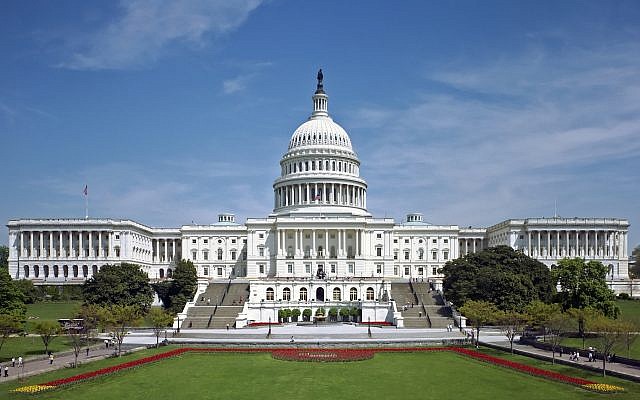 In January of 2018, I had the opportunity to attend a L’taken Social Justice Seminar in Washington, D.C. with my religious school class. The seminar, hosted by the Religious Action Center for Reform Judaism (RAC), brings Jewish teens together from all over the United States to learn about how to better amplify our voices through advocacy work; and, present our views in a Jewish context by studying and citing traditional Jewish texts.

The experience was incredibly positive: I was in a room full of young Jewish liberals of diverse backgrounds—taking workshops on topics such as campaign finance reform, and the history of abortion in the Talmud. What could be better?

My favorite part of the seminar was co-writing a speech on reproductive rights and delivering it to my state’s representatives on behalf of the RAC. The specific purpose of my speech was to urge my reps to vote against a bill that would reverse some of the rights protected by Roe v. Wade. I referenced Jewish texts and values in my reasoning, as well as drew upon my own personal experiences and concerns regarding reproductive rights.

Writing this speech helped me realize just how relevant Jewish values are in my day to day life. Before L’taken, I believed that my Judaism and my liberal values were mostly separate; yet it turns out my opinions were in concurrence with Jewish scholars from the 1400s. 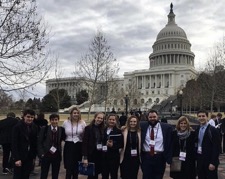 Hannah Downing (middle) with her synagogue’s L’taken Social Justice Seminar cohort in front of the US Capitol building.

The day after writing the speech, I sat in Senator Ted Cruz’s office alongside my speech-writing partners, and together we addressed Kathleen Hunker, a member of Ted Cruz’s staff, and an expert on political law. Ms. Hunker was very considerate towards us. She listened attentively and took notes while we spoke. After our speech, she told us that she respected our message, and appreciated our efforts. She said that while Senator Cruz is supportive of women and women’s rights, he’s staunchly pro-life, so there was only a very small chance that our arguments would change his mind. This was the answer I expected, but I still felt disappointed that my words probably weren’t going to have much impact.

All of a sudden, my best friend and longtime classmate spoke up: “So if he supports women, is he going to give us affordable birth control?” I had never loved my friend more than I did at that moment. Her interjection reminded me that this wasn’t over yet. There was no reason we couldn’t ask some tough questions.

Ms. Hunker replied that making contraception more accessible is an issue addressed by the states; passing a law at the federal level would be a violation of state’s rights. “What about better sex-ed?” I asked, “Creating a comprehensive sex education curriculum instead of just ‘abstinence only’?” Once again, she said it’s a state’s rights issue. Before I could ask what exactly Senator Cruz was doing to further women’s rights, our meeting ended. I walked out of that office smiling.

That moment was a huge turning point for me. I’d never really felt that my voice was of any consequence to lawmakers or the wider world. That’s partly still true since I didn’t convince Ms. Hunker or Senator Cruz to change their minds, but the questions my friend and I raised caused a stir. We made people uncomfortable, which is an important part of being an activist. You can’t change the world without ruffling some feathers.

A month after my L’taken experience, the Marjory Stoneman Douglas high school shooting occurred. I watched the Florida town hall meeting on gun control, and I saw students my age stand up and grill their representatives on why they were so slow to act on passing reasonable gun laws. I saw them doing what I did on Capitol Hill. They were relentless, refusing to back down. They were causing a ripple in the country’s consciousness, reinvigorating the conversation on gun violence.

My L’taken experience affirmed for me that like those student activists, I can have an impact. Issues like climate change or gun violence may seem insurmountable or too polarizing for our current government to address, but it doesn’t mean we shouldn’t act.

Doing nothing and staying silent in the face of injustice only serves to perpetuate the status quo. Our voices have value and we have an obligation to use them. If we keep organizing, demonstrating, and talking to our representatives, I believe that we will eventually be heard, and change will come.