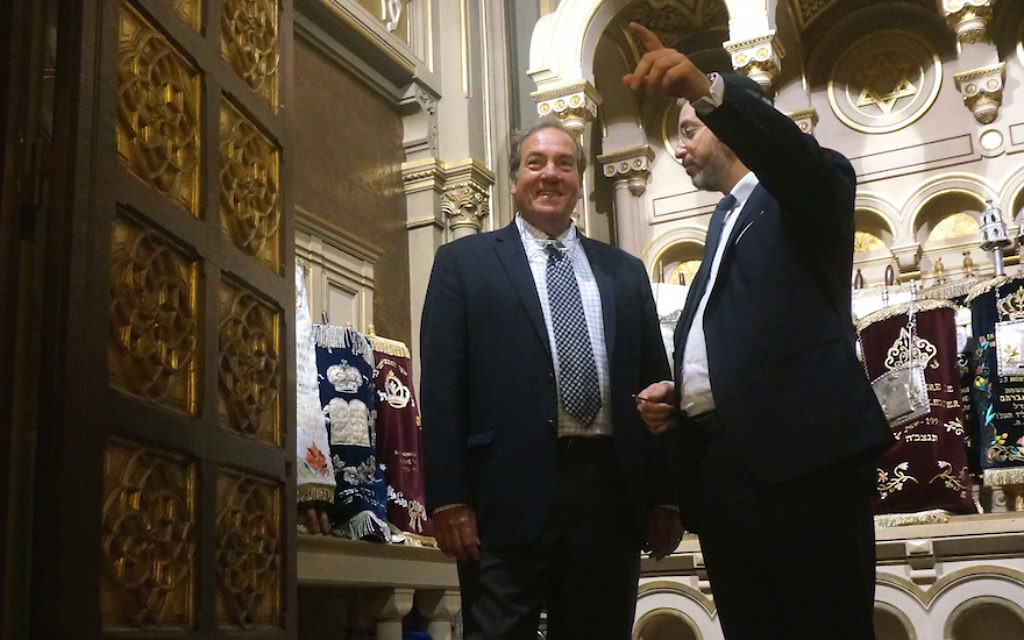 PARIS (JTA) — The summer drizzle that soaked the French capital did little to dampen Yechiel Eckstein’s enthusiasm as he arrived recently with his wife Joelle at the city’s Great Synagogue for a private tour.

But a run-in inside with a local community leader moments later — typical, perhaps, of this Israeli-American Orthodox rabbi’s often strained relationships with the Jewish establishment — quickly changed the tone of the visit.

Raised in Canada and living in Jerusalem, Eckstein, 64, was in Paris in June to oversee a major initiative by the International Fellowship of Christians and Jews — the philanthropy empire that he built starting in 1983, which now brings in $180 million annually in donations, mostly from Christian philo-Semites. According to its most recent annual report, 73 percent of its annual expenses goes to what the IFCJ calls “mission services,” including “worldwide programs to support relief, outreach, and solidarity with Israel and her people,” including food and clothing for impoverished Israeli children, basic necessities for needy Israeli soldiers and emergency provisions for Jews in Ukraine and other crisis-prone areas.

Reacting to the proliferation of anti-Semitic violence in France and the record-setting Jewish emigration it is generating, Eckstein’s fellowship this summer began bringing large groups of French Jews to Israel (450 have come so far) as part of his oft-repeated commitment to intervene anywhere Jews are threatened.

This activity was nothing new to Eckstein. His fellowship has already arranged the arrival of 4,000 Ukrainian Jews since it started in 2014 to handle Jewish immigration to Israel, or aliyah, from that war-torn country. And it has raised at least $170 million over the years to help bring about a million newcomers to Israel through the Jewish Agency.

But entering the epicenter of an established Orthodox Jewish community like the one in Paris is not routine for Eckstein — a maverick rabbi who is often shunned in Orthodox circles for his outreach to Christians and his study of other faiths, including Buddhism. The visit, to which Eckstein invited a JTA reporter, was a sign that Eckstein is finally gaining some acceptance in mainstream Orthodoxy.

The visit, however, did not go smoothly.

At the synagogue, Eckstein burst into an unsolicited cantorial performance from the ornate pulpit, triggering an angry dispute with a local community boss.

The singing interrupted an interview that Joel Mergui, a senior community representative, was giving inside the synagogue to a television crew from Israel’s Channel 10. Mergui believed, mistakenly, that Eckstein had arranged the crew to record the interview so Eckstein could elbow in on the background, and then use the footage for PR and fundraising purposes.

“It’s a trap!” a livid Mergui exclaimed, ending the interview abruptly. “I host you, advise you to keep a low profile and you use me as a prop for your commercials,” Mergui told the rabbi. The interviewers tried to explain they were not working for Eckstein, but to no avail.

As with countless previous tiffs over public recognition between Eckstein and would-be allies, the fight seemed rooted in suspicion toward Eckstein, and exacerbated by his temperament and easily bruised ego.

Eckstein is also a media presence who has produced infomercials, aired by the Fox network and Christian channels in the United States, promoting IFCJ’s projects around the world. In one video, which generated millions of dollars in donations, he is seen crying while talking to needy Jews in the former Soviet Union, where his fellowship spends $30 million annually on helping communities and promoting aliyah.

Eckstein’s intense emotional style is part of what made this Yeshiva University graduate an odd fit in Orthodox circles. But they are also what made him an instant hit with millions of Bible-loving Evangelical Christians, whose style of worship is considerably less inhibited than the norm in Orthodox synagogues.

“I realized that among the conventionally Orthodox, I would always be an oddball, a square peg,” Eckstein says in “The Bridge Builder,” his authorized biography, which was published last year.

A former professional singer — he used to perform at weddings to keep the fellowship afloat in its early years — Eckstein calmly denied Mergui’s accusation. A tall and broad-shouldered man who played basketball for Yeshiva U., Eckstein assumed a defensive yet non-aggressive body posture as he tried to mollify a much shorter but much angrier Mergui.

Eckstein apologized for his singing, explaining he “just wanted to check the acoustics.”

But Mergui’s reply hit a nerve. “I don’t want you on television singing here without rabbinical approval,” Mergui told Eckstein.

“I see you’re so afraid of having your picture taken with me,” Eckstein snapped at Mergui. “If you’re so ashamed, maybe you’re the wrong person to be giving interviews.” Turning to his wife, Eckstein said: “Let’s go get some lunch.”

Eckstein, who says in the biography that his father often discouraged him and never really believed in him, has lost dozens of allies and friends in the Jewish mainstream over his insistence on recognition for himself and his donors.

This issue was part of the reason that in 2014 Eckstein cut the group’s $13 million annual donation to the Jewish Agency for Israel and started his own aliyah operation, which offers every new immigrant a $1,000 grant on top of benefits offered by the Jewish Agency — the body certified by the State of Israel to handle aliyah.

The Jewish Agency has accused Eckstein’s fellowship – a nonprofit with several dozen staff and offices in Chicago and Jerusalem — of acting irresponsibly by creating inequality among immigrants to generate PR for himself. Eckstein dismissed the critique as coming from disgruntled competitors.

In an interview with JTA, he said the decision to break with the Jewish Agency owed to what he perceived as incompetence, red tape and a lack of transparency on their part, as well as that body’s reluctance to acknowledge the fellowship’s contribution. The Jewish Agency, in turn, has denied any such reluctance and maintains that it has solved staff-readiness issues that occurred immediately after the surge in 2014 in aliyah both from France and Ukraine.

Ever sensitive about getting a “seat at the table,” Eckstein broke relations with the aliyah group Nefesh B’Nefesh, which he helped establish, over the recognition issue in the early 2000s, he said.

To Eckstein’s critics, this is indicative of an ego problem.

“In his megalomaniacal effort to supplant both the Jewish Agency and the Federation system, Eckstein has become the Donald Trump of Jewish philanthropy,” Sam Shube, a nonprofit consultant and former executive at Rabbis for Human Rights and the Hand in Hand Center for Jewish Arab Education, wrote in a lengthy comment on eJewish Philanthropy.

Jewish federations in North America support aliyah through allocations to the Jewish Agency.

Eckstein accepts the ego charge (“I’m sure I have a great ego, I don’t think anything is done without ego,” he told JTA) but says his insistence on recognition is not self-aggrandizing but aims to “show the donors we’re taking their money and we’re doing, we’re really bringing [Jews].”

He also insists that bodies that benefit from fellowship funding show gratitude not to him but to his donors, “who give sacrificially an average of $75 from their salaries, social security payments, giving up on vacations and cars to help Jews,” he said.

As the top professional at IFCJ, Eckstein is a recipient of some of that sacrifice. From 2002 to 2007, he made an average annual salary of $363,312, plus another $129,596 per annum in unspecified benefits for a total average compensation of $492,908 a year. According to the Forward’s annual salary survey, a dozen CEOs of Jewish not-for-profits, excluding university presidents, make more than that.

But he earned considerably more after the institution of his pension plan: From 2008 to 2014, Eckstein earned an average annual salary of $464,229 from the fellowship, plus another $419,000 per annum in deferred payments to a pension plan that was instituted for him in 2008, according to the fellowship and a review of its tax-exempt filing.

John French, the chairman of the fellowship’s board, said it determined Eckstein’s compensation based on annual reviews. The pay “is comparable to or less than that of heads of similar Jewish organizations,” he said. Towers Watson, a leading organizational consultant, ranks Rabbi Eckstein’s salary as average for heads of similar sized charities, French added. The Fellowship receives positive ratings from the Charity Navigator watchdog and has the Better Business Bureau’s seal of approval, according to French.

Eckstein, a workaholic with a packed schedule and no hobbies, has worked tirelessly to give Christians a chance to help what they believe is God’s Chosen People. The challenge, he says, has been to negotiate a path that would neither espouse proselytizing nor prohibit Evangelical Christians’ perceived duty to spread Christ’s message.

His concept for doing so is called “witnessing” – a vision in which Jews acknowledge that Jesus was “a force for good,” as Eckstein says in the biography, and in which Christians leave it up to God to achieve what they regard as salvation for Jews by having them accept Jesus as the Messiah. An IFCJ video assures donors that “You Can Help Fulfill Biblical Prophecy” by donating to the aliyah of Jews from the former Soviet Union.

Despite ruptures and setbacks, this modus vivendi has allowed Eckstein’s fellowship to play a meaningful role in Israeli society and the Jewish world. But it came with a personal price. Eckstein has been boycotted personally by leaders from the haredi world, as well as some Christian zealots.

In 1989, a rabbi at his regular synagogue turned Eckstein away from the pulpit during the bat mitzvah of his oldest daughter, Tamar. He says in the biography that the humiliation he experienced then made it the worst day of his life. After his divorce from his first wife, he recalls in “The Bridge Builder,” he sank into a “dark, bottomless pit” for which he was prescribed an antidepressant.

The setbacks and insults have made Eckstein stronger and more capable of taking on greater challenges, with greater success, he says. “Or, at the very least, they gave me a much, much thicker skin than I used to have,” he added.