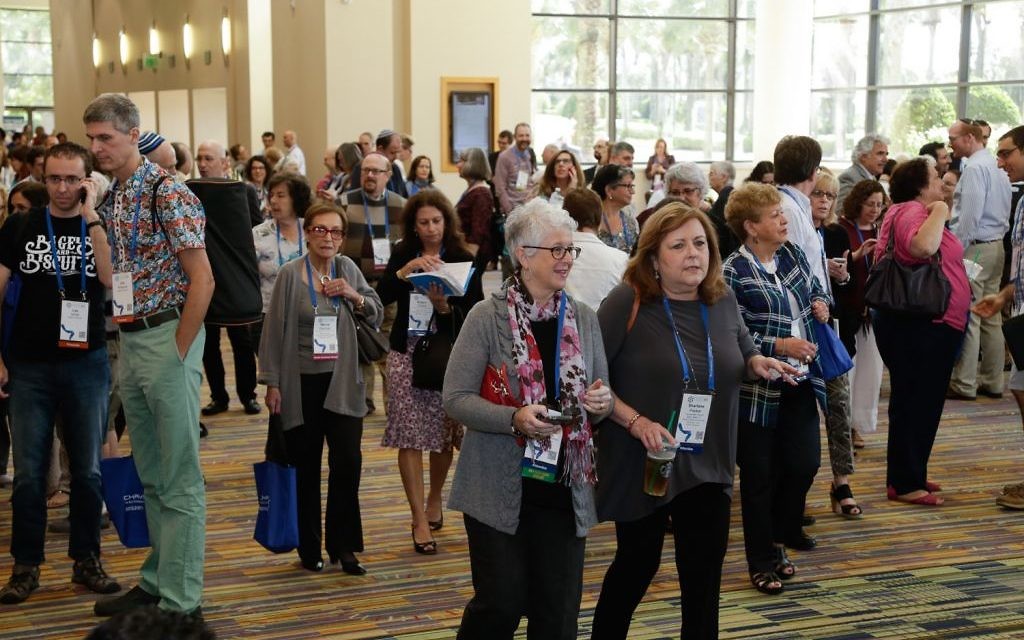 Four hundred and fifty rabbis walk into a conference room.

Not to mention 120 cantors, 250 congregational presidents, and thousands of others from 52 states and provinces. The Union for Reform Judaism’s (URJ) 2015 Biennial, the largest gathering of Reform Jews from across North America to date, has produced some memorable moments. More than 5,000 attendees packed into a sprawling hotel in Orlando, Fla., to pray, network, and get real about the challenges facing the movement.

Two days down and three to go, here are the top five moments from the conference, so far:

Break out the rainbow flags. In a resolution passed unanimously this morning, URJ adopted the most far-reaching resolution on transgender rights of any major religious organization. The resolution affirms the equality of transgender people and welcomes them into congregations, camps and other Reform Jewish institutions. “This is who we are as a movement,” said former URJ Chairman Stephen Sacks. “We were the first movement to welcome gays and lesbians into our communities: this resolution is the next step.”

After taking home the 2015 Genesis Prize, the so-called “Jewish Nobel Prize,” for promoting and upholding Jewish values, it’s no wonder Douglas praised the Reform movement during Wednesday night’s plenary session. After all, it was the Reform movement’s 1983 decision to adopt the principle of patrilineal descent that gives the 69-year-old actor his M.O.T. credentials. (His father, the actor Kirk Douglas, is Jewish.) “I never thought of myself as Jewish. I had always heard that you can’t be Jewish unless your mother is Jewish,” he said. “Today I’m proud to say I’m a Jew.” He also mentioned his wife “Catherine” (Catherine Zeta-Jones, no biggie) and his son, Dylan, as major inspirations along his path to Judaism. Dylan recently celebrated his bar mitzvah, and the family marked the occasion with a trip to Jerusalem.

Yes, folks, you read right. In a late-night session on Wednesday, Kristof, lecturing about the importance of empathy and compassion, shared that his children gave him a Gambian pouched rat for his birthday five years ago. This genius rodent, dubbed a HeroRat, can be trained to detect land mines by scent. Kristof’s rat, which he named Boban, is today busy sniffing out minefields in rural Angola.

4. NAACP President and CEO Cornell Brooks leads a prayer for all

He’s not just an activist and a lawyer: Cornell Brooks of the National Association for the Advancement of Colored People (NAACP) is also a minister. In the spirit of interfaith relations Brooks, after speaking on a Thursday-morning panel about race in America, asked the packed auditorium to bow their heads as he recited a prayer for peace, tranquility and progress. And let us say, amen.

Chabad, the chasidic movement known for their outreach efforts, received an unexpected shout-out from Birthright Israel co-founder, Charles Bronfman. After receiving the Eisendrath Bearer of Light Award for his establishment of Birthright on Wednesday night, the businessman-turned-philanthropist gave the several hundred Reform leaders a sound ego-check.

“Who is the largest trip provider? Chabad. And who performs the most conversions? Chabad. And who provides the largest number of post-trip programs? Chabad. It seems to me it should be you, not Chabad,” said Bronfman, making audience members squirm. Bronfman noted that 75 percent of participants on Birthright — which provides free, 10-day trips to Israel for Jews aged 18-25 — identify as Reform, nondenominational or just Jewish. “These are your young people.” Later in the evening, URJ President Rabbi Rick Jacobs responded the challenge, promising Bronfman the Reform movement will “never going to stop growing our numbers and increasing the impact of these transformational trips.”