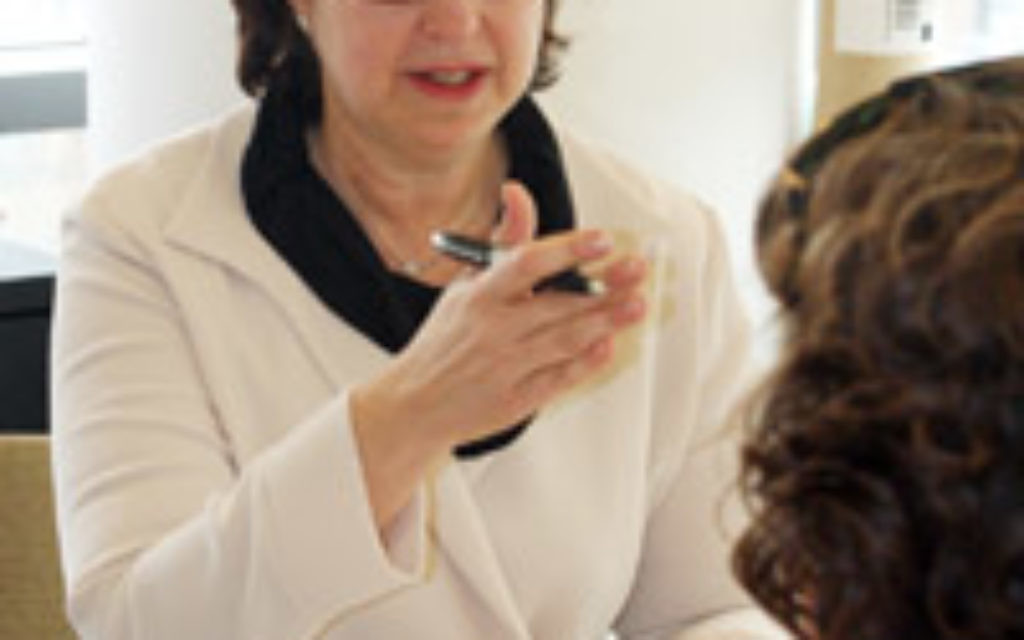 Rabbi Joy Levitt doesn’t mince words when it comes to the part-time and mostly synagogue-based programs where the majority of American Jewish kids receive their sole formal religious training.

In a recent paper distributed to Jewish educators nationally, Rabbi Levitt, the executive director of the JCC in Manhattan, described Hebrew school as a “failure” and “an essentially bad model.”

But that hasn’t stopped her from developing an ambitious plan to reinvent supplemental Jewish education for children ages 9-13. Or from recruiting a veritable who’s who of synagogues, leading Jewish professionals and funders — all of whom convened for a kick-off meeting earlier this month — to help bring the plan to fruition.

In a paper outlining her vision, Levitt, a former pulpit rabbi, honed in on a central reason for Hebrew school’s weak track record of engaging children and their families: synagogues “have been tackling the challenge of Hebrew school” as “stand-alone institutions,” ones that frequently see other Jewish organizations as competitors rather than partners.

Her alternative model has synagogues teaming up with JCCs, summer camps, museums and innovative Jewish groups like Storahtelling, Hazon and the American Jewish World Service, to offer kids and their families more choices and more customized learning plans —all for one membership/tuition price.
“The notion is it takes a village to create a Jewish adult,” she told The Jewish Week.

But in the enormous, diverse and often fractured “village” of Jewish New York can such a project actually work?

Called The Jewish Journey Project, the initiative, still in the planning stages, is being run by Rabbi Sid Schwarz, the founder of the PANIM Institute for Jewish Leadership and Values and author of several books, including “Finding a Spiritual Home: How a New Generation of Jews Can Transform the Synagogue.” The effort has enlisted the 14th Street Y, the JCC in Manhattan and seven local synagogues, including some of the most prominent from the Reform, Conservative and Reconstructionist branches: Manhattan’s Congregation B’nai Jeshurun, Park Avenue Synagogue, Temple Emanu-El, Congregation Habonim, East End Temple, the Society for the Advancement of Judaism and Nassau County’s Reconstructionist Synagogue of the North Shore.

The plan is to spend a year working out the myriad logistical, curricular and financial details and then begin piloting the project in the fall of 2012. Eventually Rabbis Levitt and Schwarz — the two are friends from their days as classmates at the Reconstructionist Rabbinical College — hope the project can be replicated on a national level. A consortium of funders, led by the Gottesman Fund and including the Jim Joseph Foundation, the Littauer Foundation and others, is paying for the $175,000 planning process.

Exactly how the project will look when it launches in 2012 — and how much it will cost — remain to be seen. However, Rabbi Levitt’s “concept paper,” which she authored while on a recent sabbatical, suggests that a “typical process for a fourth grade student would begin with a family meeting with an advisor, where the student would choose the four (or so) ‘badges’ to work on throughout the year. The student will accomplish this at their synagogue, at the JCC, in family settings, in private tutorials, and in other institutional settings in the community where programs, classes and workshops are offered. … His ‘program’ is family-centered, synagogue-based and community enriched. His parents pay one tuition bill.”

The program, as Rabbi Levitt envisions it, would also include a weekly “clubhouse,” where kids would come together to socialize and celebrate Shabbat and holidays, and would feature communal community-service “mitzvah” projects, rather than the individual ones that have become standard in many bar/bat mitzvah preparations.

The Jewish Journey Project is hardly the first effort to improve and re-imagine Hebrew school. Since the mid-1990s, programs like the Experiment in Congregational Education have worked with individual congregations to re-think their approaches, usually de-emphasizing classroom time and ramping up participatory activities that involve the entire family.

UJA-Federation of New York’s Commission on Jewish Identity and Renewal, whose managing director is serving on the Jewish Journey Project’s professional advisory board, has invested heavily in such initiatives, helping scores of local congregations participate in Project Re-imagine and a related effort, operated out of the Jewish Education Project (formerly the Board of Jewish Education of New York), called LOMED (Learner Outcomes and Measurement for Effective Educational Design). Since 2005 the Leadership Institute for Congregational School Educators, run jointly by the Reform movement’s Hebrew Union College and The Conservative movement’s Jewish Theological Seminary and funded by UJA-Federation, has offered two years of intensive professional development and mentoring to select Hebrew school directors.

Meanwhile, pilot projects like Yerusha, a family-run program in Princeton, N.J., in which kids earn badges as they learn; Storahtelling’s Raising The Bar, which helps families prepare creative bar/bat mitzvah ceremonies; and Hebrew Learning Circles, a home-based Jewish education program, have sprung up in recent years.

Rabbis Levitt and Schwarz emphasize that they are not dismissing or competing with such efforts.

Indeed, the two have been in contact with most of these players, and The Jewish Journey Project’s professional advisory group includes leaders of many of these initiatives, as well as top professionals from JTS, HUC, the Foundation for Jewish Camp, the Jewish Education Service of North America (JESNA) and the Covenant Foundation.

“We feel we’re standing on the shoulders of the work they’ve done,” Rabbi Schwarz said of Re-imagine and LOMED. “Five of the seven synagogues in our model have been through one, if not more of those programs … We think the work [Re-imagine and LOMED] have done has made these congregations ripe for something even bigger.”

Cyd Weissman, who has run Re-imagine, LOMED and other Jewish Education Project efforts in congregational education and is on the Jewish Journey Project’s advisory group, told The Jewish Week she is “delighted that congregations are innovating and are recognizing that the classroom-only model doesn’t create the impact that’s needed.

“The more interesting models there are, the more we’re able to offer families and the more we’re going to speak to the diversity of our community,” she added.

Saul Kaiserman, director of lifelong learning at Temple Emanu-El, whose religious school has just over 300 students, said that the Leadership Institute and LOMED, both of which he has participated in, are “much more about how to make change in your own institution.”

“This is about building something together that will transcend institutional boundaries,” he said, adding, “That’s incredibly exciting.”

Which is not to say that Kaiserman, along with those from other participating congregations, doesn’t have some apprehensions about the project.
“Are parents going to be able to organize drop-offs and so forth if the kids are six weeks in one place and six weeks in another?” he asked. “We’ll have to figure out how to make those sorts of things work.”

Rabbi Felicia Sol of B’nai Jeshurun, which has approximately 200 children in its religious school, said she is very excited about the project, particularly its “collaborative model.”

“The concerns, I think, are about making sure it’s a high-achieving, quality program and that it’s not so focused on the individual kid that they miss out on the community,” she said, adding that “we don’t want to become like private trainers for families.”

Like Kaiserman, Rabbi Sol also worries about the logistics. “We’ll have to make sure it’s not such a nightmare to run that it becomes too intensive or impossible to sustain.”

Leadership Institute graduate Gidon Isaacs of the Society for the Advancement of Judaism (where Rabbi Levitt’s husband Rabbi Michael Strassfeld is the spiritual leader) echoed his participating colleagues’ mix of excitement and apprehension about the project.

“What we’re hoping to get out of this is finding a new model, finding something that helps get parents out of this mindset of outsourcing Jewish education to the school,” he said, adding that he especially likes the way the project aims to give kids “choice and agency in their education.”

However, “nuts and bolts” could be a stumbling block, he acknowledges, as well as “larger questions about maintaining unity and congregational identity.”
“There’s a lot of social elements to Hebrew school as it is now,” Isaacs said. “Kids see the same kids and go through the same experiences. [The Jewish Journey Project] creates a new set of challenges around maintaining that cohesion.”

With the project still in early, exploratory stages, none of the synagogues has yet committed to piloting the project.

“Each has the option a year down the road whether to opt in or out,” Rabbi Schwarz said. “It’s possible that only five will decide in 2012 to be part of it, and from our perspective that won’t be a failure. This is a radical thing, and people are coming in not knowing what it will look like.”

Managing so many different groups — and figuring out the financing — also promises to be complicated.

“One of the great challenges of this is how to build and manage the relationships among the different institutions,” said Bill Robinson, chief strategy officer of the Jewish Education Project, who is chairing a committee charged with developing a “financial model” for the Jewish Journey Project.

Before determining “how will money flow through the system to ensure all providers are fairly compensated,” Robinson said his committee will need to learn more about the current financial practices of synagogues and their religious schools, including how much they bring in from tuition, how much their current programs cost and the extent to which the schools are subsidized by membership dues and fundraising.

Breaking down the finances can be difficult because it means determining “how much of the rabbi’s time is devoted to education” and “if space weren’t used for classrooms, would it be used for something else?”

Rabbi Levitt acknowledged the challenges — along with the high price tag that implementing a high-quality program will likely require — but said she is optimistic that the details can be worked out.

Philanthropy will be needed to supplement parental investments, she said, but “when presented with new ideas that are not same-old, same-old, philanthropists are going to be willing to invest.”