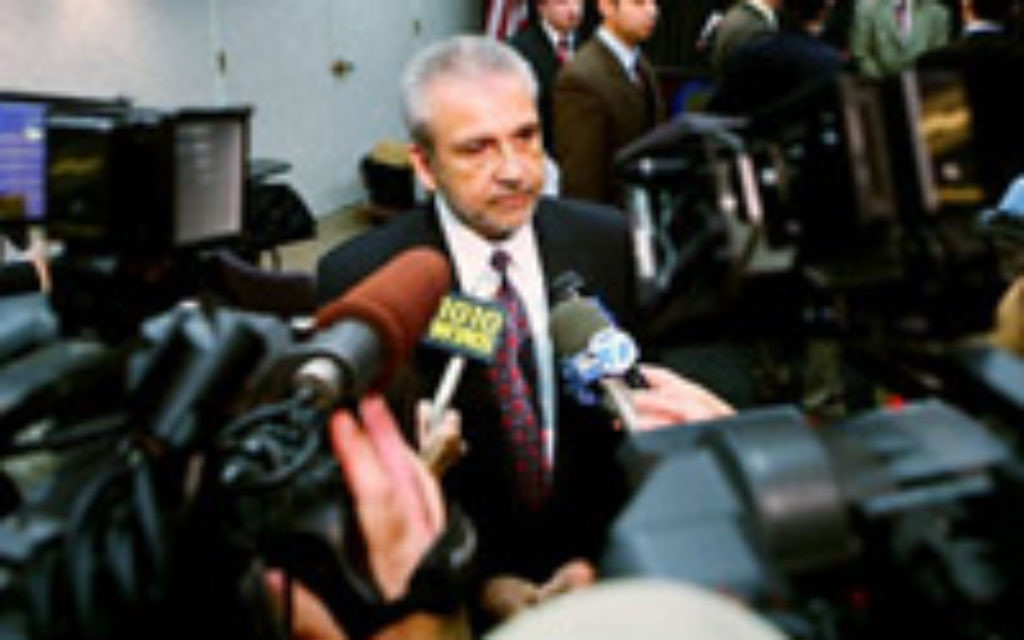 The chief of the Brooklyn district attorney’s rackets bureau and a member of the DA’s new task force to combat witness intimidation in the ultra-Orthodox community indicated a willingness to explore all available avenues to tamp down on the problem — including “[picking] up the phone and [calling] the U.S. attorney.”

Michael Vecchione’s comments came Tuesday in an interview with The Jewish Week, and they suggest an openness to receiving information from community members in sex abuse cases that his own boss, DA Charles Hynes — at least based on his recent statements to the press — appears to lack.

In public statements over the course of the past few weeks, Hynes has described the problem of intimidation of Orthodox abuse victims as worse than anything he has seen in organized crime or police corruption cases.

“We should not be limited by what [people in the community] believe intimidation is,” Vecchione said in response to a comment by The Jewish Week that many in the community fear that threats of social ostracism themselves may not be actionable as a form of intimidation.

“[Ostracism] could be [intimidation],” he asserted, noting that “the statute is specific yet broad enough, and there is a catch-all phrase that would get us into that.

“We should be limited by nothing,” Vecchione continued, adding that “[community members] should just bring to us what they have and then we will go from there.”

(Vecchione is apparently no stranger to prosecutions involving the Orthodox community. Indeed, a piece in Monday’s New York Times about a 1994 kidnapping case seems to lend weight to longstanding claims that Hynes has historically treated Orthodox defendants with kid gloves. In that case, according to the Times, Hynes’ office initially sought to drop the case and then entered into a plea deal that was later overturned by a State Supreme Court justice. The prosecutor on that case was Vecchione.)

According to the law, Vecchione explained, if someone “interferes with a prosecution by attempting to have a witness absent themselves or change their testimony” then that person is “guilty of one of the crimes that fits into the category of intimidating a witness.”

Asked whether rabbis, like David Zwiebel, the executive vice president of the haredi umbrella group Agudath Israel, who contend that reporting to the authorities before first consulting a rabbi is mesirah (the act of informing) — an action punishable by death — could themselves be committing a crime, Vecchione said that “[they] could, depending upon what the person who is making the statements is talking about and to [whom].”

According to Vecchione, this hinges on whether the person is speaking generally or whether the “intimidating statement” can be connected to “a particular case … in which a person decides not to come forward or change their testimony or something of that nature.”

“There has to be a connection between what the potential defendant and/or intimidator says and the witness in a particular case,” he continued, noting that this could be “very difficult” to establish.

Hynes himself has said that he would not take action regarding such statements, but for a different reason. Responding to a question posed by radio host Zev Brenner Monday night about whether a rabbi who says reporting is mesirah can be prosecuted, Hynes said that “no legal authority … allows me to object to [such statements] … because they are a religious interpretation.”

Some experts disagree with both Hynes and Vecchione. According to James A. Cohen, a professor at Fordham Law School and an expert in the area of witness tampering, “A [general], public statement is obstruction. In this country we respect religion … but that doesn’t give [religious leaders] license to stand at the pulpit and say ‘you must consult with a religious figure … before you go to the authorities.’ This is obstruction of justice, plain and simple.”
Marci Hamilton, the Paul R. Verkuil chair in public law at Cardozo School of Law, concurs.

“Where Hynes gets it wrong is that he cannot prosecute someone for the content or viewpoint of their speech, but he can prosecute them for inciting imminent lawless action.

“Where the rabbis are inciting their congregations to obstruct justice or endanger children,” Hamilton explained, “they are crossing the line from protected speech to illegal conduct.”

Vecchione also allowed that such statements might be viewed as an interference with community members’ civil rights — a theory that has been advanced by Orthodox attorney and author Michael Lesher. But the rackets bureau chief added that “you have to ask the federal authorities about that because … I don’t want to speak to that because I’m not familiar with the law.”

Lesher has noted “under federal law, it is a crime to use the threat of force to interfere with someone’s right to the benefits of state law, including the criminal justice system, if you make that threat because of the victim’s religion.”

“By invoking the language of mesirah — a religious offense that authorizes the use of deadly force against any Jew who ‘informs’ to the authorities — Agudah’s stated policy amounts to a deliberate call for the use of force to stop a Jew, because he or she is a Jew, from going to police against a rabbi’s instructions,” Lesher told The Jewish Week. This could make the Agudah and anyone else making such statements “complicit in a civil rights crime any time an Orthodox Jew gets a threat for talking to the police when a rabbi told him not to,” Lesher believes.

Vecchione also said that the DA’s task force might consider convening an investigative grand jury to gather information without a particular target, something that he — and Cohen, among others — have acknowledged is “a very powerful tool in terms of investigating organized crime.”

“The techniques that we use to investigate organized crime can very well be used in this situation as well,” he added.

Vecchione’s statements stand in contrast to those made recently by Hynes about those who have attempted to bring to his office information about intimidation.

Late last month, The Jewish Week reported that a father whose son was allegedly molested by Rabbi Yehuda Kolko provided information both to the police and, in an affidavit, the DA about a harassing phone call he received originating — according to the caller ID on his phone — from the school, Yeshiva Torah Temimah, where the alleged abuse occurred and which the father is now suing. (The same family pressed criminal charges against Rabbi Kolko, who was allowed to plead to misdemeanor charges of endangering the welfare of a child. Rabbi Kolko is now awaiting trial on charges he violated an order of protection that was part of the plea deal.)

In response to a question from WCBS at a recent, unrelated press conference, Hynes seemed to minimize the father’s claims, saying that he “was the victim of a telephone hang up” from “something called Torah Termina [sic] on Ocean Parkway” and that the affidavit he submitted charged “no criminality.” However, Cohen told The Jewish Week several weeks ago that “threatening phone calls” — even outside the context of a criminal or civil action — “is criminal conduct.”

The DA also appeared to cast doubt on the father’s report that the call came from the school, saying that he wished “we had that technology [that the father had] because we have one hell of a time tracing phone calls” and went on to ask, “How do we find the person that made that phone call?”

While the father acknowledges that identifying the exact person who made the call from the school’s number could be difficult or even impossible, he also noted in an interview with The Jewish Week that his phone company informed him that it would release his phone records if ordered to do so by the police or the courts. He also contends that he was given no indication that the DA or the police even investigated the claims made in his police report (which he also shared with The Jewish Week) and could not in fact get anyone from the office to return his calls for months, until after a reporter from the New York Post started making inquiries.

The district attorney also declined to meet with victims’ advocate and psychologist Dr. Asher Lipner, who requested through former Mayor Ed Koch a meeting “to share ideas and information” with the DA’s task force through (Lipner has been treating survivors of child sexual abuse in Brooklyn’s Orthodox community for over a decade).

The Jewish Week has obtained a copy of an e-mail sent by Dr. Lipner to members of the DA’s Kol Tzedek staff about the information discussed in those meetings (one of which included advocate Ben Hirsch of Survivors for Justice, and was referenced in a separate e-mail). This information included allegations of witness tampering and obstruction by named rabbis and community-based organizations. Lipner was apparently told that these staff members would be putting an assistant district attorney from the rackets bureau in touch with him, but this never materialized, according to Lipner.
However, if Vecchione’s statements are any indication, Lipner may well get another chance.

“Tell people that they have someone they can come to,” Vecchione instructed The Jewish Week. “And that our rackets division is open for business.”