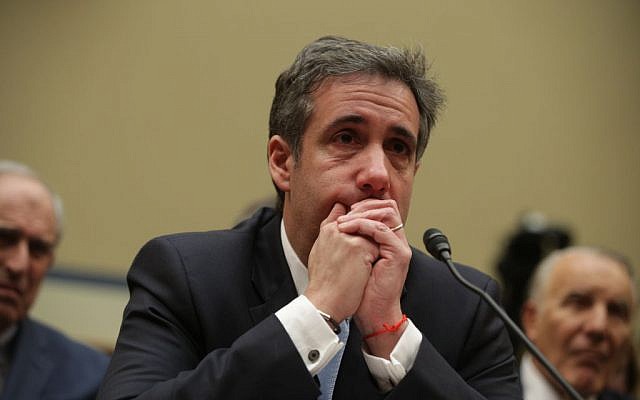 Yesterday’s hearing of the House Oversight Committee consisted of more than seven hours of questioning about Russia, tax fraud and campaign finance fraud. But at the end of the day, Jews took to Twitter to ask a bigger question: Had Michael Cohen, President Trump’s former personal lawyer and fixer, done teshuvah?

Teshuvah, or repentance, is defined by Maimonides as a process in which the penitent has to seek forgiveness from the one he or she has wronged, as well as change his or her own ways to prevent the same wrong being repeated.

With Cohen headed to jail for the next three years, the second part may be a foregone conclusion. But the sincerity of Cohen’s apology was certainly up for debate.

I don’t care what anyone says, Michael Cohen is doing teshuva.

When you’re making teshuvah next Elul and into Yom Kippur, say a little thank you to yourself that you’re not Michael Cohen and having to do it in front of Congress followed by 3 years in prison#CohenTestimoney

Teshuvah requires being honest with oneself & then speaking one's actions and digressions in full transparency to the public, particularly directed to the ones who have been specifically harmed. /20https://t.co/tlmsUcoEos

Well, sure. Although it's not my place to determine whether he has achieved the highest levels of teshuva. Still, it's a discussion well worth having (and looking at Rambam/Maimonides to see where it fits. IMHO

Some were quick to point out that while teshuvah is important, it would not excuse Cohen’s previous actions on behalf of President Trump.

Teshuvah does not excuse Cohen for his actions — nor do I.
I write not to gain sympathy for Cohen. He's played his role in corruption & damage, regardless of any change of heart being caught may have caused. I write to alert folks to:

Cohen is still dead wrong on right wing politics, but owning up to wronging people on national tv is profound. And we should celebrate forgiveness as much as we celebrate integrity because if we don't, we don't leave room for anyone's growth, our own, and no room for integrity.

I am glad Cohen is evidently going to reveal much today, don’t get me wrong. But he’s going to have to do a lot more tshuvah/amends/repentance work that’s not directly tied to saving his own hide before he gets to start throwing around morality language.

Teshuvah happens the moment you decide to change. I am glad to see you are on this path and glad you did what you did to try to start the process of repairing the damage. Good job.