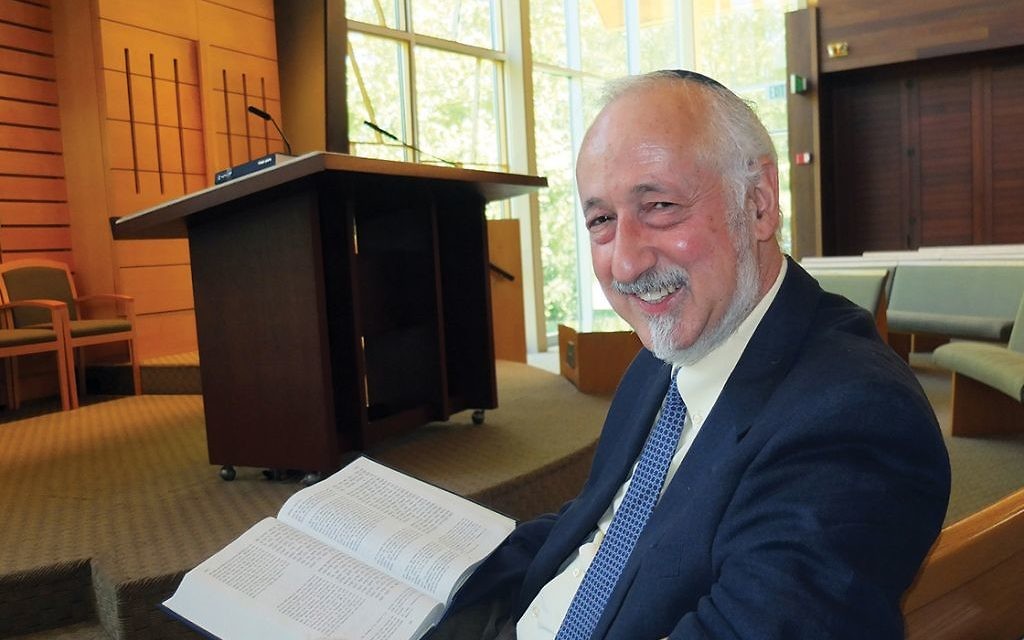 Washington, D.C. — In May 1984, the congregation at Kesher Israel, the capital’s tony Georgetown Synagogue, suddenly found itself with a rabbinic opening when the congregation’s longtime spiritual leader, Rabbi Philip Rabinowitz, was found murdered in his home.

For the next few years, a combination of congregants and, for a short time, a rabbi who left for Hillel work, performed the congregation’s teaching/preaching/counseling activities until Rabbi Barry Freundel took over the pulpit in 1989.

He continued until October 2014, when Kesher Israel suddenly found itself with a rabbinic opening again when it fired Rabbi Freundel after he was arrested on multiple counts of voyeurism for spying on women as they disrobed for the mikvah.

This time, the congregation did not look immediately for a full-time rabbi to replace Rabbi Freundel. Instead, after a half-year search, the congregation announced recently that Rabbi Avidan Milevsky, a psychotherapist and associate professor of psychology at Kutztown University in Pennsylvania, will serve as interim rabbi until a full-time replacement, who will begin working next summer, is hired.

In deciding to engage an interim rabbi, the Modern Orthodox synagogue is joining a trend outside the denomination; in recent years a growing number of non-Orthodox synagogues have seen the advantage of putting a “turn-around” or “transitional” spiritual leader in place after a congregation faces an empty pulpit because of death, retirement, or, in the case of Kesher Israel, scandal.

“We’ve had the same rabbi for 25 years; we couldn’t just jump into a process without knowing and understanding how our community has changed over that time,” said the synagogue’s president, Elanit Rothschild Jakabovics. “Jumping into a permanent search would not have been the right thing to do.”

In the Reform movement, which utilizes most of the interim rabbis in this country, 16 men and women are serving in those positions this year, said Rabbi Alan Henkin, director of rabbinic placement at the Central Conference of American Rabbis.

“A synagogue’s work with a trained interim rabbi allows time for thoughtful, intentional work, strengthening congregations for a healthy search process of their new rabbinic leader,” Rabbi Henkin said. “Once congregations hear about the specialized training our interim rabbis are provided, they usually understand … the unique benefits of working with an interim rabbi.”

“When a congregation’s rabbi leaves, the community may perceive itself ‘stuck between two worlds,’ juggling the shul’s governance while imagining a different synagogue under new rabbinic leadership,” Rabbi Deborah Prinz, former director of program and member services for the Reform movement’s Central Conference of American Rabbis, wrote in a 2012 essay, “When Do You Need an Interim Rabbi?”

“Experts in Christian settings, where Interim Ministry has long been understood as very valuable, explain that membership and budget remain stable during the interim period,” Rabbi Prinz wrote. “This work shifts the attention from the previous rabbi’s strengths or weaknesses and avoids a frequent reactive decision about the new rabbi.”

“There are always interim jobs,” Rabbi Crystal said. “I’m a turn-around consultant. It’s very fascinating and important work. Some rabbis only want to go to a congregation where there’s been an interim. You’re setting up [the new rabbi] for success.”

Rabbi Levin, who spent a year at Beth Sholom after completing a consulting course offered by the Alban Institute, helped guide a synagogue that faced “financial challenges, clergy and administration staff vacancies and a clash of personalities among its lay leaders,” the Jewish Chronicle reported.

The rabbi took part in the congregation’s search for a new executive director, addressed “congregational dynamics,” created a website that facilitated the search for a full-time rabbi, and steered a series of conversations about the qualities that members sought in a new spiritual leader.

“She certainly helped us get over some of the turmoil leading into her arrival,” said David Horvitz, Beth Sholom president. “It’s a gratifying role, this interim role,” Rabbi Levin said. “This sense of leaving a congregation in better shape than I found it is tremendous.”

In the past, a congregation with an unexpected pulpit opening would turn to a known rabbi nearby — someone retired, or working as a teacher or in another job — to fill in for a while.

Today, especially in the Reform and Conservative movements, a formal structure is in place.

Representatives of Reform Judaism, which has developed an extensive training and certification program for interim rabbis — Conservative Judaism has a smaller-scale training program — stress that an interim rabbi is not simply someone with rabbinical ordination and some free time.

“Not every [rabbi] can step in and be a successful interim rabbi,” Rabbi Crystal said.

The growth in the interim rabbinate is a sign of change in the Jewish world; many congregations, facing diminishing membership, are more cautious about whom they hire. And it’s also a sign of change in the rabbinate itself; many people with rabbinic ordination find the change of pace offered by interim posts more satisfying than a long-term job in a single congregation.

The interim rabbinate, the Reform leaders said, is becoming virtually a separate career path, ideal for people who enjoy its peripatetic lifestyle, who appreciate the challenge of stepping into a congregation that has suffered a loss at the leadership level and who have specialized training in and an aptitude for such areas as conflict resolution and systems analysis.

“This is their rabbinate,” not a compromise from a traditional pulpit job, said Rabbi Steve Fox, the CEO of Reform’s CCAR. Rabbi Alan Henkin, CCAR’s director of placement, called the interim rabbinate “the 21st-century version of the circuit-riding rabbi,” itinerant rabbis who would serve congregations in a large geographic region, particularly in the South.

“The status of the interim rabbi has risen over the last few years,” said Rabbi David Katz, who served until this summer as interim rabbi at Congregation B’nai Yisrael of Armonk. He took the post after Rabbi Douglas Krantz, who founded the congregation, left for a teaching position at the University of Delaware.

“People [in congregations] see the advantage of a change agent,” said Rabbi Katz, a veteran of several interim pulpits who served at Temple Israel Reform Congregation of Staten Island for 16 years. But, he added, it’s not for everyone. “It’s somewhat of a nomadic life — it’s packing and repacking and unpacking.”

Many interim rabbis are hired for their ability to “heal” a fractured congregation dealing with the departure of a longtime spiritual leader; but this aspect is less pronounced in the Orthodox community, said Jessica Pelt, executive director of Kesher Israel.

Interim rabbis often step into situations of unsettled intra-congregation dynamics over such issues as what type of fulltime rabbi the members want, what spiritual direction the congregation should take, and what mistakes lay leadership has made. As an outsider, an interim rabbi is in a position to speak truth to power before moving onto his or her next job.

Rabbi Marc Disick, who this summer finished serving as interim rabbi at Congregation Emanu El, Houston’s largest Reform synagogue, is a veteran of three previous interim positions; his credentials include mental-health training and expertise in pastoral care and counseling. He took the Emanu El post after the congregation’s rabbi of 41 years, Rabbi Roy Walter, retired and his replacement’s contract was not renewed.

If successful, Rabbi Disick said, “you leave the community in better shape than you found it.” The full-time rabbis hired at the congregations where he has served are still in place, he said.

Rebecca Lunstroth, Emanu El’s president, said that immediately hiring a full-time replacement for Rabbi Walter, instead of an interim, was, in retrospect, an error. “After [several decades] with the same beloved rabbi, it was an impossible feat to follow … we needed to get our house in order before engaging a new senior [rabbi].”

Lunstroth said Rabbi Disick has done “a lot of diagnostics … no congregation wants to hear about their flaws. The lay leadership is working diligently to address most of them.

“I’d say,” said Lunstroth, “that the majority of the congregation is saying, ‘Why didn’t we do this — engage an interim — in the first place?’”

But not all congregations choose to go the interim-rabbi route.

While the Reform Shaaray Tefila in Manhattan hired an interim rabbi when Rabbi Jonathan Stein announced his retirement last year, the Reform Congregation Beth Elohim in Brooklyn did not do so when Rabbi Andy Bachman announced he was stepping down.

Instead, the congregation permanently hired Rabbi Rachel Timoner. “We didn’t feel we needed a break [between full-time rabbis],” said Tomer Inbar, co-chair of Beth Elohim’s rabbinic search committee. “We would be losing valuable time to continue the work that Rabbi Bachman had begun.”

The use of interim rabbis in the wider Reform movement shows no sign of abating — and if Rabbi Milevsky’s tenure at Georgetown’s Kesher Israel proves successful, it may become more common in the Modern Orthodox world. “I feel it will grow,” said Elanit Rothschild Jakabovics, the congregation’s president.