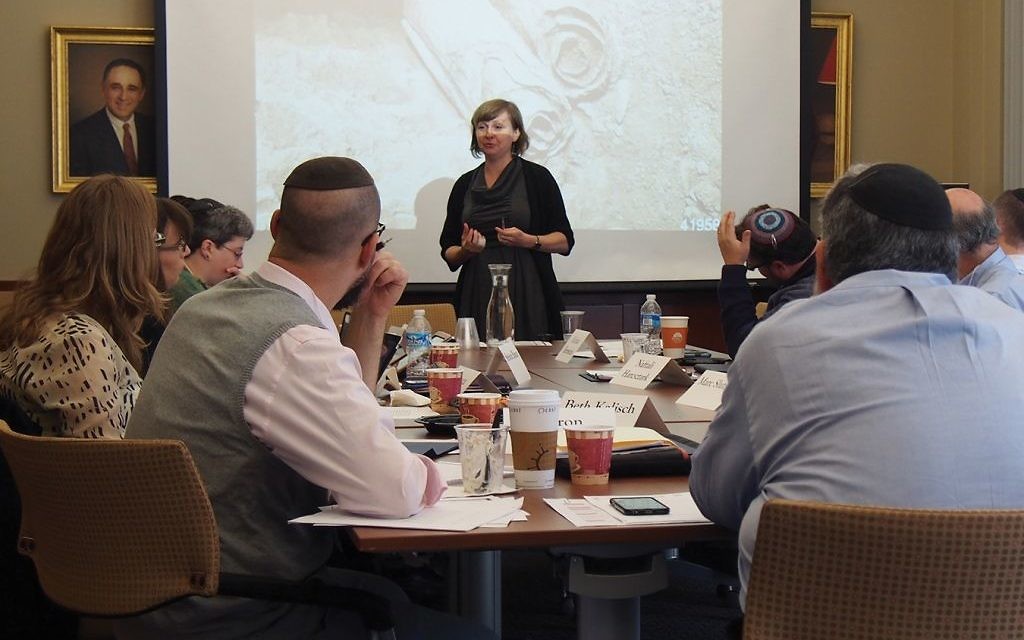 The ivory tower and the synagogue near you could hardly be more different.

In one, solitary postdoctoral fellows pore over ancient texts in search of often arcane, though potentially transformative, knowledge; for instance, the “emotional, embodied experience of prayer” in the Qumran community, where the Dead Sea Scrolls were discovered.

In the other, a community of worshippers gathers (with less and less frequency these days), and while prayer is surely on the agenda, the more mundane pressures of modern life impinge: bar/bat mitzvah schedules, the building-fund campaign, how to integrate intermarried congregants; all of it can compromise the spiritual and meaning-making project of synagogue life.

In a potentially bold stroke, Rabbis Irwin Kula and Brad Hirschfield of Clal – the National Jewish Center for Learning and Leadership, think they have a way to unite academia and the wider Jewish community. The goal: to bring the ideas uncovered by those postdoc fellows to Jews in the pews, and those beyond the synagogue. And in that way to “reimagine Judaism on the ground,” according to Rabbi Kula.

In what is believed to be a first-of-its-kind program, Clal is teaming up with the Katz Center for Advanced Judaic Studies at the University of Pennsylvania to train a cohort of multi-denominational rabbis to be “translators,” as Rabbi Kula calls them.

“We need to have them be bridges,” the rabbi told The Jewish Week on the eve of the program’s first session last week. “How can we take this serious research, this peer-reviewed research being done in Jewish studies programs, and figure out what difference it makes to the lived lives of people we deal with? How can we take this ‘private good’ that’s been living in the ivory tower, and make it a ‘public good?’”

The program’s playful acronym, LEAP, suggests the movement from the academy to the people: it stands for leverage, expand and popularize.

The guiding metaphor for the pilot program, Rabbi Kula explained, is drawn from medicine: the idea that basic science (discoveries in the lab) leads to applied science (getting those drugs and procedures to patients). “From bench to bedside” is how it’s described in the medical literature in what is referred to as “translational medicine.”

In Jewish life, the rabbi said, “we have all this high-end knowledge — the basic science — in the university. And millions of dollars are being spent on these Jewish studies programs.

“But we have no applied science,” he said, no one to take those ideas and that knowledge, translate it, make it accessible and communicate it beyond denominational lines to the Jewish community.

The program, then, is looking for a few good Deepak Chopras to bridge the disconnect.

“For us as a research institution,” said Anne Oravetz Albert, the Katz Center’s director of public programs, “we want the ideas coming out of the Katz Center to be put into terms that are accessible and useful. Our fellows will be doing the teaching and presenting their research, and the rabbis will be trying to figure out how that work can be turned into something meaningful to congregants.”

The first cohort of rabbis comes from a pool of more than 100 that Clal has trained in a program called Rabbis Without Borders. Thirteen, including Rabbis Kula and Hirschfield, met for two days last week at the Katz Center in Philadelphia for the first of three sessions of a yearlong course of study focusing on the inner life of Jews (the pilot runs for two years).

Two scholars at the Katz Center, Eva Mroczek and Rachel Werczberger, spoke about their research into “experiments in community building and prayer practice,” as Rabbi Hirschfield put it, one ancient and the other contemporary. Mroczek focused on the nature of prayer in the Qumran community, and Werczberger on the idea of “Jewish authenticity” as it applied to several Renewal/New Age-type communities in Israel that flourished in the early 2000s but eventually collapsed.

Rabbi Hirschfield was struck with the parallels between Jewish spiritual life more than 2,000 years ago and that life today. “People during the Dead Sea period were figuring out how to pray in the first-person singular. It’s one of the things secular Jews today deal with — the idea that spiritual life starts with me. Our ancestors were dealing with the very same thing.

“To tell people in our community that everyone can be a psalmist like David — that can unleash people’s hearts.”

In terms of the practical applications that might follow from the session on Qumran prayer, Rabbi Hirschfield mentioned a Reform rabbi who is in the midst of a search for a new cantor. “He said he now understands that the decision is not a musical one but rather one about prayer, about people’s needs for prayer. It will now be a different kind of search process — one that is based on learning how the Dead Sea sect of Jews prayed 2,100 years ago.”

For Joshua Davidson, senior rabbi at the Upper East Side’s Temple Emanu-El, the session on the intersection of New Age and traditional Judaism seemed to present possibilities. “The New Age rituals allow for a more personal interpretation of traditional liturgical rubrics,” he said. “It’s clear that in more traditional worship settings, it’s important to personalize the lessons of the liturgy, to personalize the communal and historical narrative to engage individual worshippers.”

While warning that “there are certain lines that shouldn’t be crossed,” Rabbi Davidson said, “If we are to engage our generation, and future generations, we have to be really open-minded how we go forward.”

Rabbi Tully Harcsztark, principal of the Modern Orthodox day school SAR, said he has “long been trying to figure out how academics and Jewish communal professionals could work together. Bringing these two groups together, for me, that’s the compelling part — bridging theory and practice.”

In terms of putting the academics’ insights into practice, he urged patience. “It’s too soon right now; these are not linear things. I think we have to spend some time at the meta level, to reflect on the process, dig deeper, build a shared vocabulary.”

For Ayelet Cohen, a former pulpit rabbi at Congregation Beth Simchat Torah in the West Village and now the director of the Center for Jewish Living at the JCC in Manhattan, the chance to meet with rabbinic colleagues across the denominations was “stimulating” and one that could lead to collaboration and innovation.

“The JCC is a wide-tent community organization, and while we don’t gather for prayer, I can imagine program platforms where we could integrate these ideas,” she said. She mentioned the JCC’s Shabbat dinner program and its night of learning for Shavuot.

Undergirding the LEAP program is Rabbi Kula’s subtle critique of Jewish establishment institutions, their approach to Jewish life and how they have framed the debate in the wake of recent Pew Research Center findings about Jewish attitudes and practice. The central narrative, post-Pew, the rabbi said, “is that we have a problem of erosion, of assimilation, of engagement. We invest in attachment programs. Birthright, for instance, is not about ideas but about attachment. We don’t care what the attachment does, and we never ask, does it actually help people flourish as human beings?

“Our claim is that we don’t have an identity problem, a group pride problem. What we have is a weakening of legacy institutions, like all of America. What we have is a serious R&D problem, an ideas and practice deficiency. The products and services and wisdom are themselves in need of reimagining.”

Asked if some of the rabbinic translations of the cutting-edge academic research might lead to a dumbing down, Rabbi Hirschfield dismissed the fear, saying, “Dumbing down is how people talk about popularization when they’re not controlling it.”

For the Katz Center’s director, Steven Weitzman, the program “isn’t just about the information our fellows are teaching. It’s to give rabbis an idea of how scholars think about Jewish culture today, or the inner life of Jews, or what constitutes authenticity in Judaism — the range of questions they bring to the table.

“Our hope,” he said, “is that it helps them to think in new ways about practical questions.”