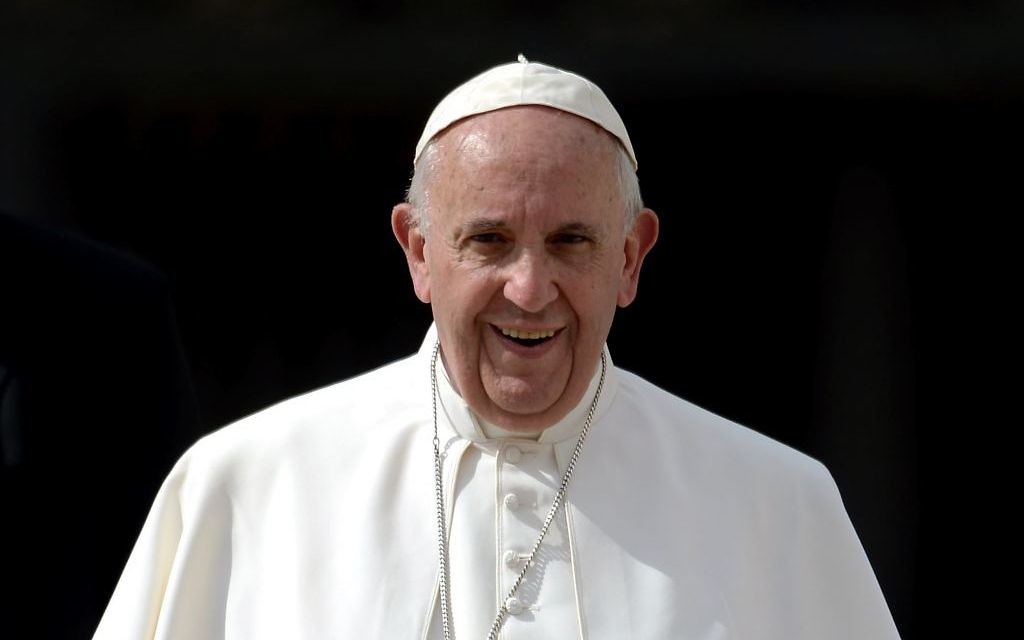 During Pope Francis’ recent visit to New York, there was over-the-top media reverence for the humble servant of God, there was ecumenical spirit at an interfaith service at the Sept. 11 Memorial Museum and there was sheer joy as the pontiff cruised through Central Park in his stylish Fiat.

What there wasn’t, it seemed, was humor.

Turns out, the Vatican had the sense to make humor part of their greater mission.

On the eve of Pope Francis’ U.S. trip, an organization of the Catholic Church launched jokewiththepope.org, a website that announced a competition to decide the title of Honorary Comedic Advisor to the Pope. Interested men and women were invited to submit — via videos, or typed-out jokes — clean humor that would reflect the Vatican’s standards and values.

More than 4,000 people from 47 countries participated.

The winner: a rabbi from Vermont with a catholic sense of humor.

Rabbi Bob Alper, who was ordained in 1972 by Hebrew Union College-Jewish Institute of Religion and has worked for the last 27 years as a stand-up comic after 14 years as a full-time pulpit rabbi, received an email with the surprising news on Monday from the American branch of the Pontifical Missions Societies (PMS), which sponsored the joke contest.

The 70-year-old rabbi, who lives in East Dorset, Vt., said he “was kind of shocked and delighted” after hearing the news.

Rabbi Bob Alper is a veteran of ecumenical performing, having appeared in comedy shows for more than a decade with Muslim and Protestant colleagues. In his 27-second video, the rabbi makes a mild joke that pokes fun at himself.

“I’ve been married for 46 years, and my wife and I are on the same wavelength. At the same time that I got a hearing aid, she stopped mumbling,” he said.

“The joke is one of the best I’ve ever written,” Rabbi Alper told The Jewish Week in a telephone interview. “It’s reality. It’s something with which people can identify. It exemplifies the Pope’s values, which are family, humor, warmth.”

The contest was an extension of the Vatican’s increasing use of social media and a reflection of Francis’ accessible personality, said Father Andrew Small, national director of PMS.

He said the idea of the competition came to him in a dream, as a means to spread joy and to promote a new digital app about church missionary work. The contest’s website features three church missions — in Ethiopia, Argentina and Kenya.

“I have [humor] in my cultural DNA,” said Fr. Small, a native of Liverpool, England, known for its “rip-roaring sense of humor.”

When he “shopped the idea around” in church circles some people were nervous that it would be perceived as disrespectful to the Pope, he said. Then Francis, who had heard about the proposal, sent a letter of approval in his native Spanish. “ I like to laugh — a lot. It helps me to feel closer to God and closer to other people in my life,” the Pope wrote. “I invite you to share your happiness, your joy and your laughter with one another and with the whole world. Share your jokes and your funny stories: the world will be better, the Pope will be happy and God will be the happiest of all.”

That was all the imprimatur that Fr. Small needed.

He promoted the contest through local dioceses, and implored such celebrities as Bill Murray and David Copperfield to enter. Guideline: “the sort of joke you would feel comfortable telling the Pope, with your mother present.” In other words, squeaky clean. But hip.

Entries were posted online. People could vote for their favorite, but an interfaith panel of humor mavens chose the winner.

How did a rabbi make the final cut?

“We picked the person who fitted the role” as the Pope’s humor advisor, Fr. Small said. He called Rabbi Alper’s joke “original … situational … gentle … [and] self-effacing.” And it is family-focused, just like the Pope, who. Fr. Small said, “was talking all the time about the family.”

Besides the honor of being named to the honorary position, the winner has no official duties. A meeting with the Pope is not a prize, but, said Fr. Small, “I don’t think it’s crazy at all. The Lord works in mysterious ways — Rabbi Bob has a bright and holy future in front of him.”

Humor is a bridge between religions, Fr. Small said.

Rabbi Alper agreed, saying that the apparent anomaly of a rabbi winning a Catholic-sponsored contest shows that all faiths share an appreciation for humor. “It goes to the idea that a refined sense of humor is important for any spiritual leadership,” he said.

Rabbi Alper said one of his Muslim colleagues has told him that “Mohammed had a good sense of humor.”

Similarly, said Father James Martin, editor-at-large of America – The National Catholic Review, “I follow a rabbi who had a good sense of humor. Jesus had a great sense of humor, but we [today] don’t understand the humor of 1st century Palestine.”

Fr. Martin, author of “Between Heaven and Mirth: Why Joy, Humor and Laughter are at the Heart of the Spiritual Life” (HarperOne, 2012), also entered the papal joke competition.

He said he thinks “it’s fantastic” that a rabbi won the contest. “My response is, ‘mazel tov.’”

Rabbi Alper performs mostly in Jewish venues and on college campuses, but aspires, like most stand-up comics, to appear on the Tonight Show. He said winning the contest has brought him nearly there.