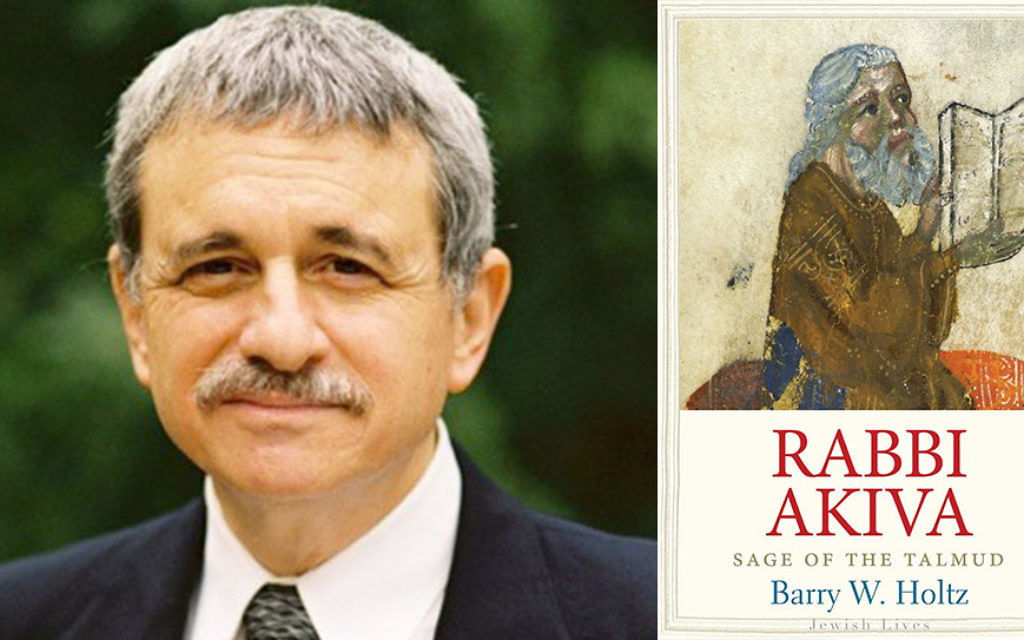 Barry Holtz and the cover of his book, "Rabbi Akiva: Sage Of The Talmud." Courtesy of JTS

When I ask Barry Holtz about the holes in his research about Rabbi Akiva, he points out that nothing is known about the early life of the great sage of the first and second centuries. Since the time of Freud, he suggests, no one could write a biography without delving into the subject’s early life and family relationships, yet he had no such sources — no archives, no letters or diaries. While the name of Akiva’s father, Yosef, is known, nothing more is known about him, and the name of his mother is lost to history.

Holtz has written what he calls an “imagined biography” about the much-admired rabbinic figure born around 50 CE. “Rabbi Akiva: Sage of the Talmud” is a compelling new volume in Yale University Press’ “Jewish Lives” series. While Akiva’s name is mentioned 1,341 times in the Babylonian Talmud, he is a “man without a past.” What exists are stories — literary anecdotes about his life, parallel retellings that are not identical, lessons inferred from his actions, drawn from the Mishnah, Tosefta, the Babylonian and Jerusalem Talmuds and midrashim — all “internal” sources of Judaism. Understanding that these stories can’t be read as factual accounts, Holtz parses them, often in various versions, to tease out the culture, values and religious teachings embedded within. Amidst the challenges, he manages to capture Akiva’s distinctive voice.

The Theodore and Florence Baumritter Professor of Jewish Education at the Jewish Theological Seminary, Holtz pursued the latest academic research, even as he was assertive about the fact that he was not writing an academic book. Like the contemporary scholars whose works he cites, Holtz, who served as dean of the William Davidson Graduate School of Jewish Education for five years, follows the tradition of “relating to the materials not as historical data but as literary and cultural footprints from the rabbinic past.”

In an interview at the kitchen table of his Upper West Side apartment, Holtz is erudite and down-to-earth, choosing his words carefully and enjoying the occasional detour into other stories. He mentions two connections between Rabbi Akiva and the upcoming Days of Awe: one, the more well-known, is the story of Akiva’s tragic death — with the words of the Shema on his lips — at the hand of the Romans. Along with accounts of the deaths of other martyred rabbis, it is poetically told in the liturgy of Eleh Ezkerah, the martyrology, read on Yom Kippur. 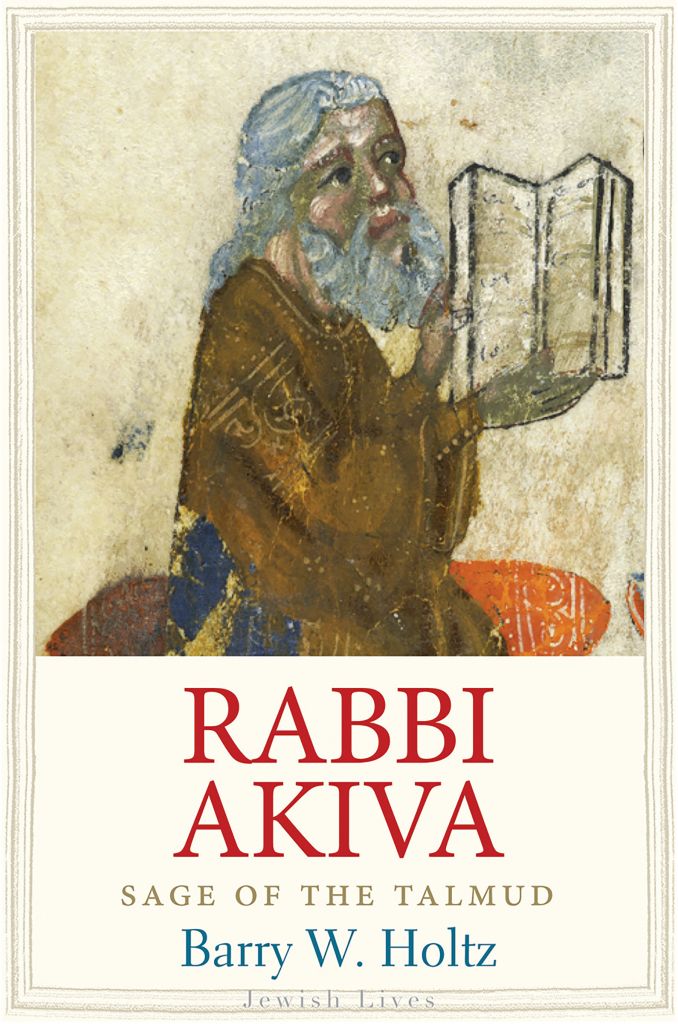 “Rabbi Akiva: Sage Of The Talmud” by Barry Holtz. Courtesy of JTS

Holtz also retells a story in the book about a time of drought, when the people, in much despair, asked their leaders for help. Akiva’s teacher, Rabbi Eliezer ben Hyrcanus (the two were often in dispute), offered the prayers said on a fast day but they were not answered. Rabbi Akiva then stood before the congregation and prayed for mercy, and the rains then fell. According to the Talmud (Tractate Ta’anit), the rabbis heard a heavenly voice saying that it wasn’t because one man was greater that his prayers were answered, but that because Rabbi Akiva was a forgiving person and the other was not.

Akiva’s prayer is echoed in the “Avinu Malkeynu” (Our Father, Our King) prayer, which is an important part of the High Holy Day liturgy, and is also recited on fast days, calling on God for mercy.

“What does it mean to be a forgiving person?” Holtz asks. “This quality of Rabbi Akiva is very powerful — there’s a modesty about him. In the world of the rabbis, there was a lot of room for holding grudges — these were combative worlds, with emotions stirred, not physical reactions.

“The Avinu Malkeynu prayer takes on a different meaning for me because of the context of that story. It’s a beautiful prayer and so many people are moved by it — we’re worried about our life and future. From Akiva’s side, it’s saying that you should be the kind of person who doesn’t hold grudges, who forgives others even when they shouldn’t be forgiven,” he continues.

“I’m taking it further than the text says — it speaks to me that way — we would be better off nowadays to view other people with a kind of generosity. That speaks to me in our culture, where it feels like everything is ratcheted up.”

Holtz writes, “Akiva always seems to be in the middle of the action, whether he is the central player himself or a significant supporting actor.” The most well-known statement attributed to Rabbi Akiva is that the biblical phrase, “Love your neighbor as yourself,” is the greatest principle of the Torah.

One of the best-known stories about Rabbi Akiva relates to his meeting his wife, which seems like an oddly contemporary story. He was a poor shepherd and, in a romantic twist, was noticed by the daughter of the wealthy landowner. With insight into his outstanding qualities, she approaches him and suggests that if they were to marry, she would encourage him to go off and study with a rabbi. He agrees, her father cuts them off and they live in poverty in a hayloft in what might be a scene from a Puccini opera, Holtz suggests. When Akiva stays away for 12 years in pursuit of Torah studies, she is wholly devoted to him. (Some say that her name was Rachel, but there is not agreement among scholars if her name was even known.) He returns and by then is known for his wisdom and moral strength, is reconciled to his father-in-law and then goes off for another 12 years, although by then he is a wealthy man.

“When I began this project, I didn’t have strong feelings about Akiva. In the end I came to admire and be very moved by him. The part that took me by surprise is his world of friendship and sense of community — this world of a small group of people who fought with one another, cared for one another, eating together, constantly talking about the world,” he says.

For Holtz, building community has been a major force in his life. As one of the founding members of the pioneering Havurat Shalom in Boston, Minyan M’at in New York as well as a minyan in Philadelphia when he was teaching high school there, he has long been involved with communities that seriously wrestle with Torah, amidst fellowship. As he wrote the biography, he realized how much he had been affected by Akiva’s world.

He recognizes that others have written about Akiva, and have found their own paths to the sage. Many remember him for his martyred death by torture, or for his scholarship and interpretation. For Holtz, the Akiva who stands out and stays with him most is the “man in the community of the sages, talking about Torah, setting the stage for the future. This is where Akiva shines, where his heart sings — in the give-and-take of learning and debate.”

The way Judaism is practiced today is very much shaped by the arguments and debates of Rabbi Akiva and his associates. Holtz emphasizes that “Akiva represents a kind of intellectual characteristic that has shaped Judaism and Jews until today, that is, the close reading and interpretation of text” — in secular as well as religious life. “Akiva would interrogate the text, seeing every letter as a possibility for interpretation — the creation of a Jewish mind, in a sense, begins with Akiva. He’s not the only one, but he became the leader and representative of a culture.”