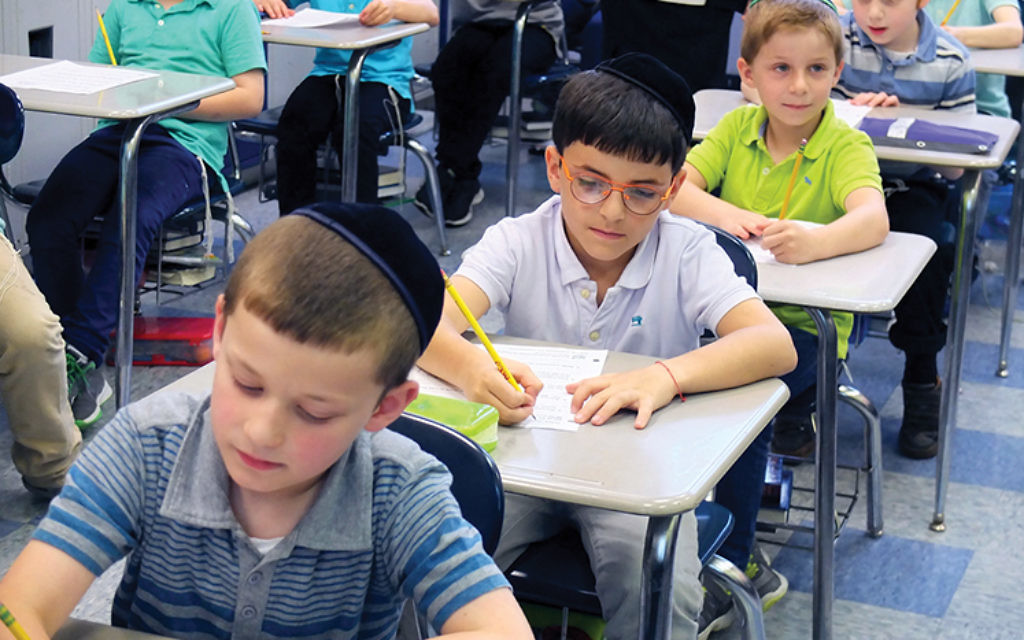 Students at a Jewish school in Midwood, Brooklyn. MICHAEL DATIKASH/JW

One year after the city vowed to investigate claims of subpar secular education at dozens of ultra-Orthodox yeshivas in Brooklyn and Queens, a coalition of yeshiva educators, families and community leaders have formed a coalition to improve yeshivas from within.

It’s not clear, however, whether Parents for Educational and Religious Liberty in Schools (PEARLS) actually plans to improve secular education in yeshivas or if the group’s goal is to give lip service to the idea to appease city officials while keeping the status quo.

Attorney Avi Schick, who represents the yeshivas being investigated and who advises PEARLS, told The Jewish Week in an email that the organization “supports improvements to the secular curriculum while ensuring that the yeshiva education continues to remain a fundamental bedrock institution of Jewish learning.”

Asked for specifics about how the curriculum will be changed, he said, “Academic consultants have been working for many months to design a curriculum, including lesson plans and textbooks published by the major textbook publishers. A series of teacher trainings will commence in August. Copies of the materials prepared by the academic consultants have already been shared with the various district superintendents, and [the material] has been very well received.” He did not respond to The Jewish Week’s request to see some of the materials.

One of the consultants hired by PEARLS is Richard Altabe, former head of Yeshivat Shaare Torah in Midwood, where students take the New York State Regents exams and college-level AP courses. He told the Wall Street Journal that the new curriculum would meet the Common Core standards that New York State public schools follow.

Bringing the secular education at the yeshivas under investigation up to Common Core standards, which are rigorous, appears to be quite a tall order. According to Young Advocates for Fair Education (Yaffed), a nonprofit pushing for better secular education in charedi yeshivas, tens of thousands of chasidic and black hat boys aged 13 and over receive no secular education at all, and boys 12 and under only get about six hours of English and math instruction per week. Students are taught no science or social studies at all, the group says. Asked how it would be possible for yeshivas to align with Common Core standards with just six hours of secular education a week, Schick said only that PEARLS would be “focusing on the elementary grades, at least for now” and that the “Pearls math textbook is being published by Sadlier-Oxford, a well-known textbook publisher long-approved by the DOE.”

But while PEARLS representatives discussed their plans to improve secular curriculum with the secular press, in the Orthodox newspaper Hamodia, Rabbi David Zwiebel, executive vice president of Agudath Israel of America and a member of Pearls’ executive committee, said the group was started to protect Torah education.

“We see around the globe an alarming tendency by governments to insist that all non-public schools meet requirements of the public education systems, in many cases imposing obligations that are contrary to religious beliefs,” he said. “These things need to be kept for parents and yeshivos to decide.”

The group’s July 14 news release says the organization was created to explain “the extraordinary importance of the yeshiva school system,” “to protect the right of parents to choose a religious education” and “to improve the yeshiva curriculum while protecting the fundamental bedrock principal of religious learning.” Pearls’ website is more direct, saying its goal is “to support efforts to improve yeshiva curriculum so that children receive the best religious instruction possible.”

The only suggestion in the release that the group will also try to improve secular studies comes from PEARLS founding member Rabbi David Niederman, chairman of the United Jewish Organizations of Williamsburg, who says the group will “continually strive to provide students with the tools they need to become productive citizens that contribute to society.”

Rabbis Zwiebel and Niederman did not respond to requests for interviews.

Yaffed founder Naftuli Moster said that while at first he had hoped that the group might sincerely want to improve secular education, the Hamodia article and press release were “extremely disappointing.”

“At this point I have zero faith in PEARLS accomplishing anything in terms of improving the education system,” he said. “It turns out that they were just a group created for the sole purpose of thwarting any possible progress.”

He added that the fact that PEARLS announced in its press release that it had hired the public relations firm Global Strategies Group makes clear that the group’s primary goal is to change the public perception of yeshivas, not to improve them.

Democratic strategist Hank Sheinkopf said it’s possible that PEARLS’ might be able to make more progress with the city than Yaffed because it’s sanctioned by ultra-Orthodox community leaders, who, for the most part, consider Yaffed to be a threat.

Mayor Bill de Blasio has always had a strong relationship with charedi communities, having started out representing large portions of Borough Park as a city councilman. While de Blasio might be reticent, for political reasons, to be seen cooperating with Yaffed, he might be more comfortable working with PEARLS.

“The de Blasio administration will do its very best to create smooth waters if possible … to avoid conflict with a constituency that has become loyal,” he said. “Don’t bet on anyone who is concerned about being elected at this level to take this issue head-on [by working with a group like Yaffed]. Maybe this group is a means to achieve some level of compromise.”

Asked why the investigation has taken more than a year and when a report on it would be released, DOE spokeswoman Toya Holness said, “We have been in productive conversations with the schools for months while our investigations have continued and we are encouraged by the progress we’ve seen.”

“These claims have been pending for years and it doesn’t look like anybody’s rushing to do anything, either pronounce that the schools are meeting the requirement, or that they’re not,” he said. “Whether city or state education officials really have an appetite to pick this fight remains to be seen.”

This isn’t the first time that the city’s charedi communities have responded to the threat of government oversight with promises to reform the system from within and self-police any groups that fail to fall in line.

When the Bloomberg administration increased its oversight of the controversial charedi circumcision ritual metzitzah b’peh by requiring parents to sign consent forms informing them of the dangers associated with the procedure, charedi leaders and the de Blasio administration made a deal that if the city dropped the consent forms, the charedi community would require mohels to be tested for herpes if an infant they performed a bris on showed signs of being infected with the virus. If the mohel were found to be the source of the virus, he would be banned for life from performing metzitzah b’peh.

However, when a child was infected by herpes in April of 2015, shortly after the agreement was put in place, the parents refused to identify the mohel who performed the bris. And in 2012, The Jewish Week discovered that Rabbi Yitzchok Fischer, who had been banned by the state from performing metzitzah b’peh in 2007 was still performing the ritual five years later.

In metzitzah b’peh, a mohel sucks on a newborn’s penis after a circumcision to draw blood away from the wound with the goal of cleansing it. The practice can lead to brain damage or even death if the mohel transmits the herpes virus to the baby during the procedure.

“It’s pretty clear that in the case of the chasidic community, self-policing hasn’t worked very well,” Stern, of the AJC, said, referring to the realm of education.

“It’s worked very well for the chasidic schools,” he amended, “in the sense that if they don’t want to provide secular education nobody’s stopping them from not providing it. But that doesn’t satisfy the state’s interest in having kids with the basic tools of literacy and of math that they need to have choices in their adult lives.”