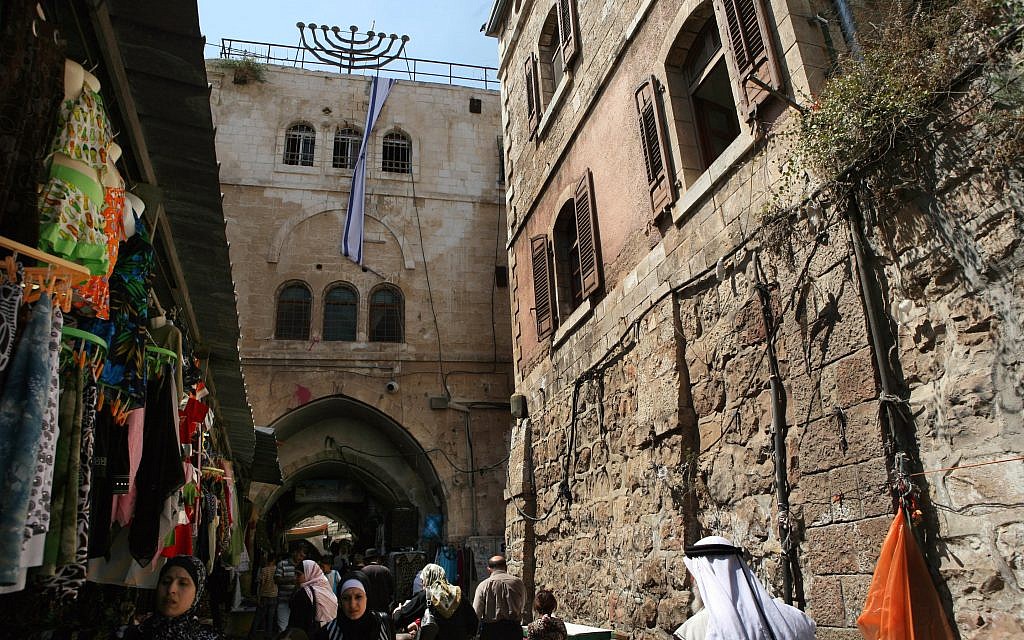 Illustrative image of a property in the Muslim Quarter of Jerusalem's Old City owned by Ateret Kohanim. Here people walk past the Wittenberg House, which was previously owned by former Israeli prime minister Ariel Sharon and used as a place of cultural gatherings at the end of the 1800s. Getty Images

The Palestinian Authority has arrested 45 Palestinians in recent months for allegedly selling property to Israeli Jews, a crackdown that has even swept up a Palestinian-American on charges of facilitating the sale of a house in the Muslim Quarter of Jerusalem to Yeshivat Ateret Kohanim for a reported $500,000.

One man, Issam Akel, 53, of Jerusalem was arrested last October after he was “summoned to go to Ramallah under false pretenses of having to sign some documents,” according to Yifa Segal, director of the International Legal Forum, a nonprofit that promotes peace, justice and equality in Israel and the Middle East.

“Issam lived in the U.S. for over a decade,” she said in an email and phone interview from Israel. “He was married and has children there. His two youngest kids are from his second wife with whom he has been living here. However, he does still have siblings living in the U.S. and at least one of his older kids.”

The Trump administration demanded Akel’s immediate release but has remained silent since the announcement last week that Akel was sentenced to life in prison and hard labor. Just how hard the administration wants to push the Palestinians is unclear when Israeli-Palestinian peace talks are not even on the horizon.

There was utter silence also from the international community and civil rights organizations. Neither the American Civil Liberties Union nor the Anti-Defamation League, for example, chose to comment. 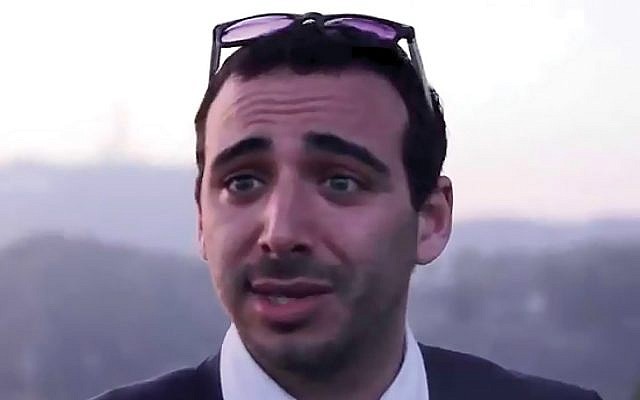 Issam Akel was sentenced to life in prison by the Palestinian Authority for allegedly facilitating the sale of a house in the Muslim Quarter of Jerusalem to Yeshivat Ateret Kohanim. Via YouTube

The issue is a thorny one for organizations and companies because it would get them entangled in the Palestinian-Israeli conflict. The rental giant Airbnb, for example, faced a fierce backlash after it decided last November to remove approximately 200 Israeli Jewish rentals in the West Bank, land that it said is “subject to historical disputes between Israelis and Palestinians. … Many in the global community believe companies should not profit on lands where people have been displaced.”

Segal said she too has reached out to human rights organizations including Amnesty International “and I have not heard back from any of them. Neither have I heard back from the European Union, [German Chancellor Angela] Merkel and the United Kingdom. Not one of them is willing to say anything about this issue; it’s appalling and shameful.”

Calls to the newly minted Rep. Rashida Tlaib (D-Mich.), a Palestinian-American, for comment were not returned.

Asked by The Jewish Week to comment on the Akel imprisonment, Human Rights Watch said in a statement that it had “not collected enough information to judge the case in question.”

“But if we did so,” it said, “we would be mindful of the fact that this is happening in the context of an occupation and underlying armed conflict. We would want to look at the clarity of the law, the fairness of the trial proceedings, and whether the penalty was disproportionate. We would also want to look at whether the ban on sales is on the basis of nationality or on the basis of religion (e.g., no selling to Jews) – the applicable laws banning sales do not seem to be crafted on the basis of religion.” 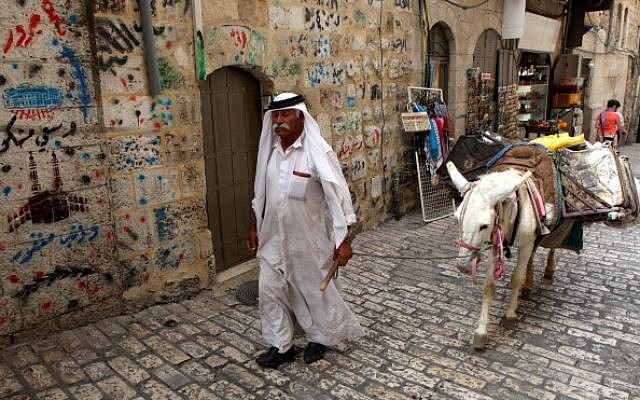 An oil vendor walks with his donkey in the Muslim Quarter of Jerusalem’s Old City on May 10, 2010. Getty Images

But Malcolm Hoenlein, executive vice chairman of the Conference of Presidents of Major American Jewish Organizations, said that by preventing Palestinians from selling property to Jews, the PA is “not only pre-determining the final status [of disputed land], it is saying that Jews have no right to live there no matter what is decided [in final-status talks]. They are saying this land should be judenrein [free of Jews].”

Among the few Jewish groups to issue statements deploring the PA’s actions are the Zionist Organization of America and the National Council of Young Israel. Also rushing to Akel’s defense was former Brooklyn Assemblyman Dov Hikind, who met with Akel’s wife, Maram, and two daughters (Nataliem, 7, and Sila, 3) in Israel last month. He said “the family denies that [Akel] sold” the property in question. 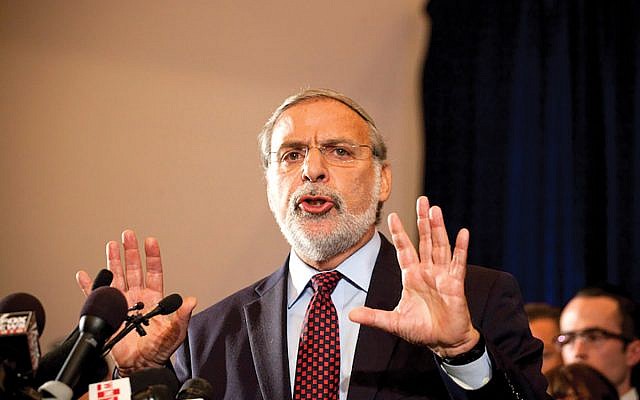 “She shared her pain and difficulty in surviving,” he said of Akel’s wife. “Here is a young woman with two little children and I could see how scared she was. She had reached the point — after holding it for two months — that she decided to go public.”

On Nov. 28, the Trump administration weighed in, calling upon the PA to release Akel. David Friedman, the U.S. ambassador to Israel, tweeted, “The Pal Authority has been holding US citizen Issam Akel in prison for ~2 months. His suspected ‘crime’? Selling land to a Jew. Akel’s incarceration is antithetical to the values of the civilized world, the US & to all who advocate the cause of peaceful coexistence. We demand his immediate release.”

The Pal Authority has been holding US citizen Isaam Akel in prison for ~2 months. His suspected “crime”? Selling land to a Jew. Akel’s incarceration is antithetical to the values of the US & to all who advocate the cause of peaceful coexistence. We demand his immediate release.

Hikind, who said he also met with Friedman over this issue, noted that at his urging, Maram Akel wrote a letter to President Donald Trump that he handed the president during his visit to the White House at the December Chanukah reception. In it, she wrote that her husband has been tortured and that his “physical and mental health [are] deteriorating from day to day. I fear that if this continues, he will not survive for much longer.”

Nothing further was heard about Akel until last week when the PA announced that he had been sentenced to life in prison and hard labor following a one-week trial. The Palestinian Grand Criminal Court ruled that Akel had been found guilty of “attempting to cut off a part of the Palestinian land and adding them to a foreign country.”

The PA considers it a crime to sell any property to Jews and those convicted have been sentenced to hard labor or the death sentence.

Segal said she understands that Akel, who worked as a clerk for the PA, was concerned about the possibility of arrest before he traveled to Ramallah, the seat of government for the Palestinian Authority. But she said that although Palestinians were being arrested for allegedly selling property to Jews, there had never been arrests of Palestinians who had Israeli residency, as Akel does, “and certainly not an American.” 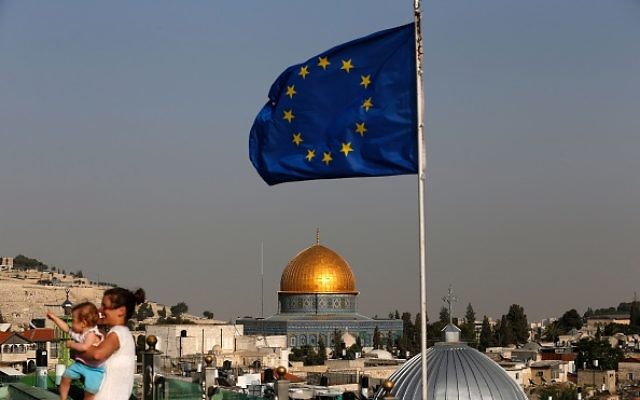 “He felt that protected him,” Segal said.

Segal said a representative of the U.S. Embassy was “eventually” allowed to visit Akel, as was his wife.

“They allowed her to speak with him on the phone once a week and she has seen him a couple of times,” she said.

Within hours after the PA announced Akel had been sentenced to life in prison, unconfirmed reports surfaced suggesting that Akel would be extradited to the United States.

“[We want] to end this affair — he has become a burden on us,” one PA official was quoted as telling Israeli journalist Gal Berger.

A spokesperson for the Israeli consulate in New York said Israeli law does not prohibit Jews from selling property to Palestinians. On the contrary, Segal said, an Israeli Jew “could be sued for discrimination if he refuses to sell because the buyer is an Arab or a black person.”