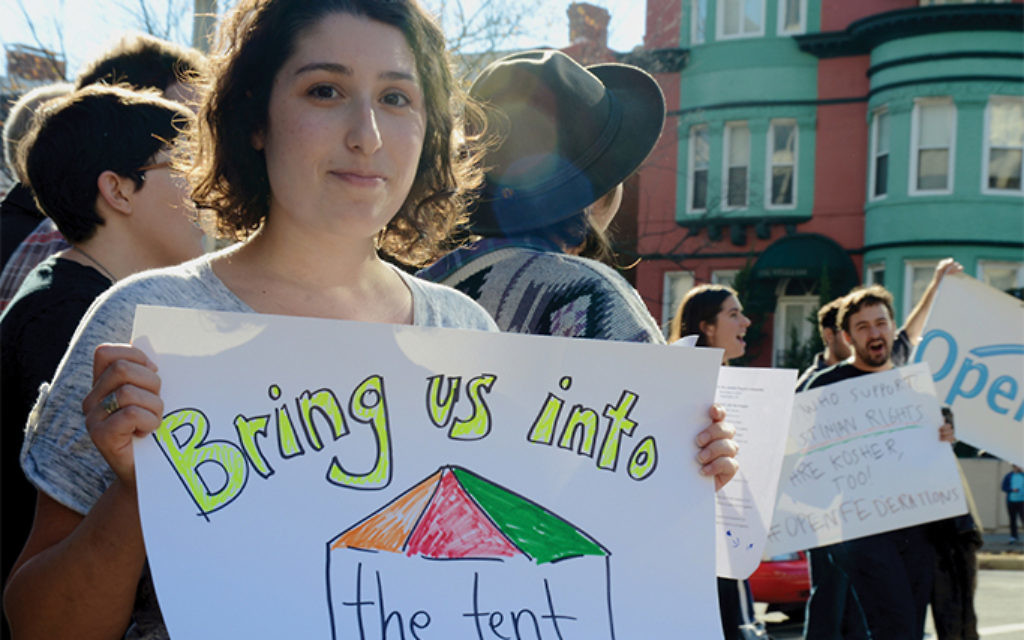 The General Assembly of the Jewish Federations of North America is the kind of ur-establishment event that draws the biggest names in the global Jewish community: Israeli Prime Minister Benjamin Netanyahu, for one.

That kind of star power obscured a gathering of another sort last week that took place at the same time, the Jewish People’s Assembly of Open Hillel, a protest against the main event that took place across the street from the Washington Hilton, which hosted the GA.

The group, which drew about 30 people to its rally, compared with the 3,000 that attended the GA, was trying to make the point that Hillel isn’t the only major Jewish organization that polices conversations about Israel, marginalizing critical viewpoints, especially among younger people, who compared to other groups are more likely to favor boycotting goods produced in places Israel occupies. JFNA did not respond to a request for comment.

“This was us going out of our comfort zone a bit,” said spokesman Caroline Morganti, a senior at M.I.T. She said that although the 3-year-old group has so far focused Hillel, taking aim at JFNA seemed the next logical step.

“The Jewish Federations of North America are such a large distributor of funds, so we thought it would be great if people could start talking about they way that they shape the conversation,” she said.

Since 2012, Open Hillel held a conference at Harvard University and now this combined conference and protest in D.C., but mostly acts opportunistically, trying to help activists on campuses across the country challenge Hillel’s “Standards of Partnership,” which regulate which groups can and can’t speak about Israel under Hillel’s auspices.

The organization has worked to help Harvard’s Hillel put a civil rights activist critical of Israel on a panel about contemporary civil rights work. They also supported an event at the University of Pennsylvania’s Hillel co-sponsored by Students for Justice in Palestine and J Street U, the student arm of J Street, which seeks a two-state solution.

So far, Hillels on only three campuses — Swarthmore, Vassar and Wesleyan — have become “open,” breaking with the international organization over the standards of partnership. The movement recognizes that the Hillel chapters on most campuses are too financially dependent on the parent organization to consider doing that, so they concentrate their efforts on trying to broaden conversations within the existing structure. The group currently has a mailing list of almost 2,000 and a core membership of about 60.

It started when the Harvard Progressive Jewish Alliance, a Hillel-affiliated group, moved to co-sponsor an event with the Harvard Palestine Solidarity Committee. The Boston Federation, known as the CJP, informed Harvard’s Hillel that the Palestine group violates Hillel’s standards, and including them could mean a loss of funding.

That original experience, in which the CJP intervened to enforce Hillel’s rules, was one that prompted the activists to consider broadening their mandate, Morganti said. They’re considering creating an additional group consisting of former students who started out in Open Hillel but have now graduated, and would try to facilitate more inclusive conversations on Israel in federations and other organizations.

Still, the movement is maintaining a tight focus. It’s concerned only with organizations that claim to be pluralistic, Morganti said.

“If you have an organization whose goal is to serve all Jews, then we would like to push them on that,” she said.