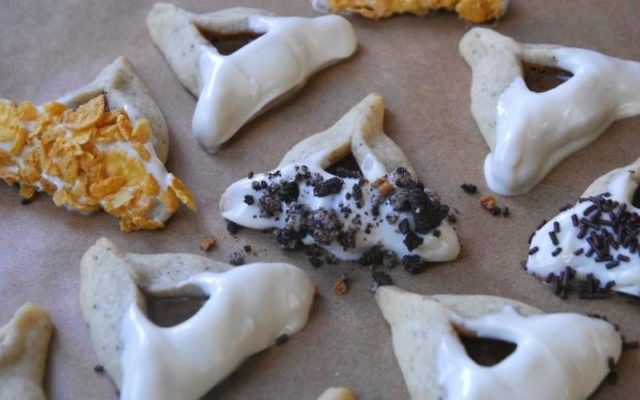 The best thing about a Jewish leap year is having two months of Adar. While many eagerly await the fourteenth day of the second Adar to celebrate the holiday of Purim, I count down until the fourteenth of the first Adar for a special day known as Purim Katan. Yes, there is no megillah reading or dressing up in costumes, but the perfect excuse to bake hamantaschen early.

While many have different recipes for the hamantaschen pastry dough, the overall ingredient structure is standard. The hamantaschen filling, though, is the hub of the creativity. There are numerous contenders: apricot and prune are the classics but have become less popular in recent years. Now, Nutella is all the rage. Some have even sported flavors such as lotus, poppy seed, s’mores and even peanut butter and jelly. While these new flavors are certainly more exciting, I prefer the classic prune hamantaschen; well, only when my mom bakes it.

I know Purim is coming when I see my mother preparing her famous hamantaschen. The process involves rolling out the dough, making perfectly round circles using the top of a cup, placing a glop of prune filling in the center of the circle and carefully pinching those circles into the triangular shape that constitutes hamantaschen.

When I was younger, my brother used to take out his camera to record episodes of Iron Chef Hamantaschen. As the host, he would zoom in on my mother’s delicate craft and offer background commentary: any excess prune filling or misshapen triangles would warrant critique. My brother would wake up nine-year-old me to judge the competition and contribute to the final consensus. My sister was the pantry woman (someone’s gotta do it.) The night then culminated in a tasting. Because my mother wanted to save the hamantaschen to distribute at our Purim party, she only allowed us to eat from the “ugly ones.” Suddenly, our standards of beauty skyrocketed.

With the few pretty ones we had left, we decided to incorporate it into our mishloach manot (Purim basket), already filled up to the rim with Laffy Taffys, Hershey kisses and Arizona Iced Tea. Because my family is so beloved, we quickly ran out of mishloach manot as we received more visitors than anticipated. (Or perhaps it was because of the popularity of our impressive mishloach manot.) To improvise, we opted for our pantry’s hidden gems. With my sister’s expertise on all things pantry and my brother’s knack for determining exactly how expired is “too expired,” we assembled a creative mishloach manot output. One included a ten-year expired Coca-Cola can that my brother won in a fifth-grade contest, which tasted surprisingly un-expired. We also had some Oreos, but because of a limited quantity, some people got Oreos and some people got keto-friendly bran muffins. As people came to the door, we had to decide whether they were our true friends or mere acquaintances. True friends would receive the Oreos. Mere acquaintances? They were left to rot in the dust with our keto-friendly bran muffins.

I love Purim: the megillah reading, the candy, the hamantaschen, the delivering of mishloach manot and the costumes. And at the center of it all is a story of Jewish resiliency. Haman, like so many others in history, wanted to destroy the Jewish people. But, as it is so in every case, he was unsuccessful. As a nation, we have prevailed through numerous attempts of eradication. G-d is forever on our side. That will always be cause for celebration.