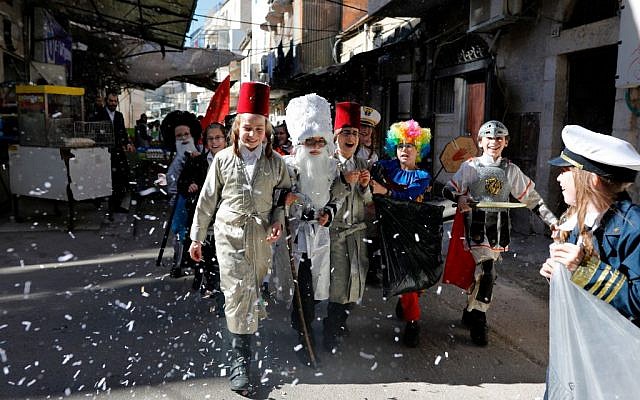 Celebrating the lead up to Purim in the Mea Shearim neighborhood of Jerusalem on March 19, 2019. Getty Images

Unlike Passover or Rosh HaShanah, Purim is relaxed (except for parents making children’s costumes). It doesn’t come “early this year,” or “late,” but as on-time as a birthday. With its exuberance and innocence, it is a holy day without sermons or scolding, without suits or ties. It is so associated with masquerade, carnivals, candy and drinking that it is easy to forget how foreboding the Megillah is, how haunted, how current.

The Megillah is a reminder that hating Jews is older than even the word “anti-Semitism,” a word that sounds sanitized compared to the threat Haman posed: A mass murder of Jews throughout the 127 lands from Persia to Ethiopia. The Jews were looking at state-sponsored annihilation (like Iran regularly threatens Israel), more ominous than any one man — Haman — could pose alone. As with all anti-Semitism, Jews had neither alibis nor options.

For all of our concern of late of rising anti-Semitism here at home, from the far right and the far left, it is important to maintain a sense of historical context. Jews once feared the Church; now no one loves Israel more than evangelicals. A generation ago, Russian Jews teaching the Alef-Bet were sent to prison camps in Siberia; today, Russian President Vladimir Putin, for all his dangers, allows yeshivas and Jewish institutions throughout his empire. Not long ago, Jews were kept out of universities, hotels, social clubs, and neighborhoods. Today, anti-Semitism often is more subtle. And yet, anti-Semitic crimes continue to top the FBI hate crime chart every year of the 21st-century, under every president. And in Europe, anti-Semitism — sometimes violent — is on the rise and increasingly dangerous.

The Megillah can be interpreted as espousing the use of deep diplomacy to ward off destruction. Mordechai and Esther don’t take up the sword; they use their wits to defeat Haman. But the Jews did take up arms to defend themselves and kill those who rose up against them. And certainly Mordechai and Esther risked their lives to stand up for their people.

The “Esthers” among us today must take professional and political risks, “and if I perish, I perish.” After all, as Mordechai warned Esther, “Do not imagine that you will escape in the palace…”

The Megillah, promising a happy ending to a difficult story, offers a remedy: Unity, spirituality, and grace — to the poor, to each other, to the promise that God and goodness are still among us, even if sometimes unseen. It’s a lesson well-taken this year and every year.