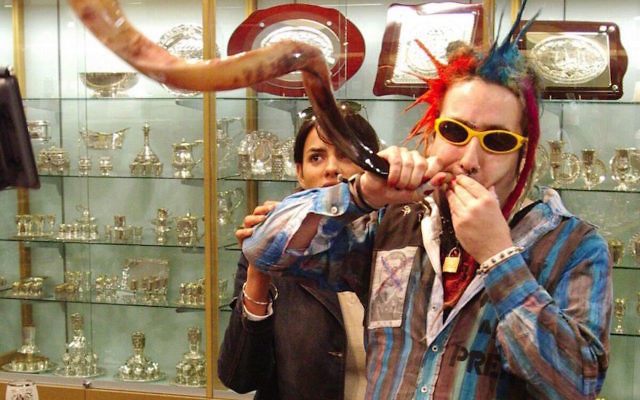 Bram Presser of the band Yidcore blowing a shofar at a Judaica store in Melbourne, Australia. (Peter Haskin)

JTA — Schmekel — a transgender Jewish punk band based in Brooklyn — opened its 2011 album with “I’m Sorry, It’s Yom Kippur.” The song features lyrics like “I’m sorry I came out to you in such an awkward way” and “I’m sorry I said you have schmutz on your head when it was Ash Wednesday.”

Naturally, since the song is about Judaism’s holiest day of the year, it begins with the sound of the shofar, an ancient Jewish wind instrument made of a ram’s horn. Singer Lucian Kahn calls out for a “tekiah,” which can be translated as “blast,” and bassist Nogga Schwartz responds by sounding the shofar.

“The shofar is just a part of Yom Kippur,” said Schwartz, 32, who as a teenager blew the instrument in synagogue on Rosh Hashanah and Yom Kippur. “We thought it would sound good to open up with it as it helps bring thoughts of the holiday.”

The shofar, traditionally made of a ram’s horn, is most prominently heard on the High Holidays as a reminder to look inward and seek forgiveness for mistakes made in the past year. But other traditional uses in Jewish practice include everything from funerals and excommunication ceremonies to the warning of imminent danger.

Recent years have seen a new twist in the practice of blowing the shofar: Jewish punk bands incorporating the sound into their music. The bands use the ancient horn as a way of both making mayhem and honoring tradition — but always as a blatantly Jewish symbol that conjures associations with the High Holidays or Jewishness in general.

Using a shofar “invites the listener into a musical world that is contemporary, but also in discourse with tradition and identity,” Eliahu Adelman, a musicologist based in Israel, told JTA. “Many bands that play music affiliated with a specific ethnicity often combine elements of traditional music with contemporary.” 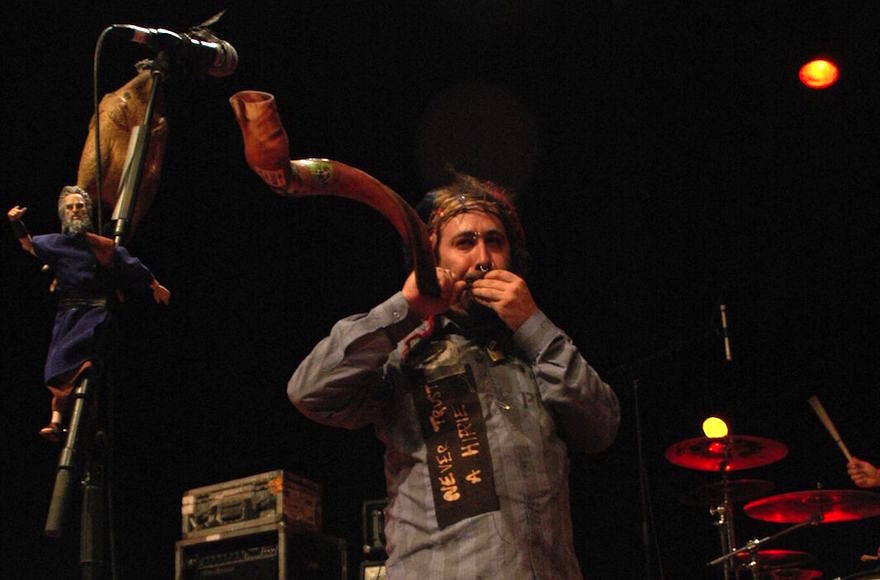 This fits in with the Jewish punk bands’ larger approach of putting a Jewish stamp on punk rock. Approximately two dozen Jewish punk bands have emerged, mostly during the past 20 years: Moshiach Oi! and The Shondes are among the best known. They play punk rock with an overtly Jewish focus, finding resonant entry points to Jewish culture and religion, such as lyrics about wooing actress Natalie Portman or by throwing bagels and gefilte fish at fans.

Steve “Gangsta Rabbi” Lieberman, a one-man band from Long Island, is one such punk rocker. He plays an eclectic variety of instruments, and learned to blow the shofar at his synagogue in Bellmore, New York, in 1973, when he was in the 10th grade. Thirty years later he wanted to add new instruments to his collection and thought he’d give the shofar another try.

There was one obstacle, however: Lieberman is a vegetarian who only plays animal-free instruments. So when he found a wooden shofar on eBay, listed as “Hebrew Shofar (Ram’s Horn)-Wooden,” he figured it was made for him.

Conventionally, the shofar is played with three different sounds: the tekiah (a sustained blast), “shevarim” (three broken sounds), and “teruah” (nine staccato sounds). But Jewish punks — in true punk fashion — did things their own way.

In 2004, Lieberman played his wooden shofar in his cover of “Tie Me Kangaroo Down, Sport.” The Australian folk song sometimes includes a didgeridoo, an indigenous Australian wind instrument, but the shofar allowed Lieberman to put a Jewish spin on his version.

Although Lieberman stopped playing wind instruments when he got dentures shortly afterward, the prolific musician is planning on releasing his 70th album at the end of August.

Since the Jewish punks embraced the shofar, its use has spread among other musicians, both Jews and non-Jews. In 2006, Madonna included a shofar in her song “Isaac.” In 2013 Macklemore, a non-Jewish rapper, sounded one in a commercial. That same year, electronic musician Alvin Curran released an album of avant-garde shofar songs, “Shofar Rags,” as part of Tzadik Records’ Radical Jewish Culture series. In 2014, on his album “Shofarot Verses” in the same series, jazz saxophonist Paul Shapiro played the shofar in the liturgical song “Ashamnu.”

An early punk-shofar pioneer was Bram Presser, the go-to shofar player for the Jewish community in his native Melbourne, Australia. He’s better known as the front man for the comedic Jewish punk band Yidcore, which was notorious for “shofar shots” — one person poured kosher wine down the horn and another drank out of the mouthpiece. Members of the band, and the audience, imbibed during shows, and the drinking continued backstage.

Presser, 41, played the shofar on at least 10 Yidcore songs. He explains that in the 2004 song “Hora (New Version),” the sequence of teruah, shevarim, and “tekiah gedolah” (“great blast”) created “general cacophony” and “irreverent chaos.” In “They Tried to Kill Us. They Failed. Let’s Eat!” the shofar was part of a jubilant celebration.

Not every Yidcore song with a shofar was for the sake of punk rock frenzy. The lyrics of the Hebrew song “Hakotel” mention a shofar at the Kotel, the Western Wall, and when Yidcore covered the song in 2002, Presser played standard shofar parts to “create a bustling Kotel scene.”

“The shofar is essentially an ancient instrument,” Presser said. “Why shouldn’t it be played like one?”

“That it also makes a great siphon for alcoholic beverages is just an added bonus.”

Michael Croland is the author of “Oy Oy Oy Gevalt! Jews and Punk,” which was published last year by Praeger (an imprint of ABC-CLIO).